The Magic announced Dwight Howard will undergo season-ending back surgery, and he'll miss the NBA Playoffs. But if this is how the soap opera ends, all it does is create more questions.

Share All sharing options for: Dwight Howard And A Potential Tipping Point

Just about everyone in the NBA is an outrageously gifted athlete. Even someone like Matt Bonner is a thousand times more gifted athletically than the best player in your pickup game. Among the stars, it gets more surreal. Guys like Kobe Bryant, Dwyane Wade, Kevin Durant, Derrick Rose, Blake Griffin. On a nightly basis, they stretch the limits of what should be possible for humans.

Twisting drives to the hoop, jumpshots where they hang in the air for what feels like forever, dunks that make us catch our breath. We can appreciate what makes superstars incredible because we see it on video, and know that what they're doing is only barely human.

But then there are certain guys you just have to see to believe. Growing up, Allen Iverson and Shaquille O'Neal were amazing on TV, but I didn't totally appreciate how amazing they were until I saw them in person. Iverson was just so much smaller and so much faster. Up close, you could appreciate how long his odds really were in a league full of giants, then watch his blinding first step make all the giants helpless. Blink, and he'd be at the rim, squeezing between two 6'10 guys for an easy layup that would be impossible for anyone else. It's something I'll ramble to my kids about.

And Shaq. You knew he was big, but he was so much bigger. Not just tall, but wider and stronger than any human being I'd ever seen before. Just the most powerful dude I'd ever seen. And quick, too. He could overpower anyone on the court whenever he wanted, but just as often he'd back someone down and explode into a spin move for an easy bucket. Nobody that big should be that explosive. It just wasn't fair. Thank God he couldn't hit free throws.

Anyway, it's great to see any superstar in person, but those two were different. Seeing Iverson and Shaq is something I'll remember for the rest of my life, just because they were that incredible up close. And right now the NBA has three of these guys: LeBron James, Chris Paul and Dwight Howard.

Paul's awesome for a lot of the same reasons that Iverson was -- he looks like an eighth grader dropped into a Varsity game, only the eighth grader is kicking the living crap out of the Varsity. The biggest difference between him and Iverson is that instead of scoring, it's Paul's passing that leaves you babbling in disbelief. Either way, though, you watch Paul play in person, and it sticks with you. (Plus, you can't appreciate just how insanely competitive Paul is until you see his chippiness up close, where he chafes against pretty much everyone on the court.)

LeBron's just from another planet. The best way to describe LeBron is that he's Blake Griffin and Chris Paul combined. As big and strong as anyone, but also the most explosive athlete in the league, and maybe in all of sports. His passing can take your breath away, and then you watch him dive to the rim, control his body in midair, absorb HARD fouls like they're nothing, finish at the rim ... The whole experience is just ridiculous. And that's all before you watch him lock up another superstar on defense.

I still remember going to Wizards-Cavs playoff game with my mom, when she couldn't stop talking about how impressive LeBron was. "This is the PLAYOFFS," I said. "He's the ENEMY."

It was the worst. Mostly because I knew she was totally right. 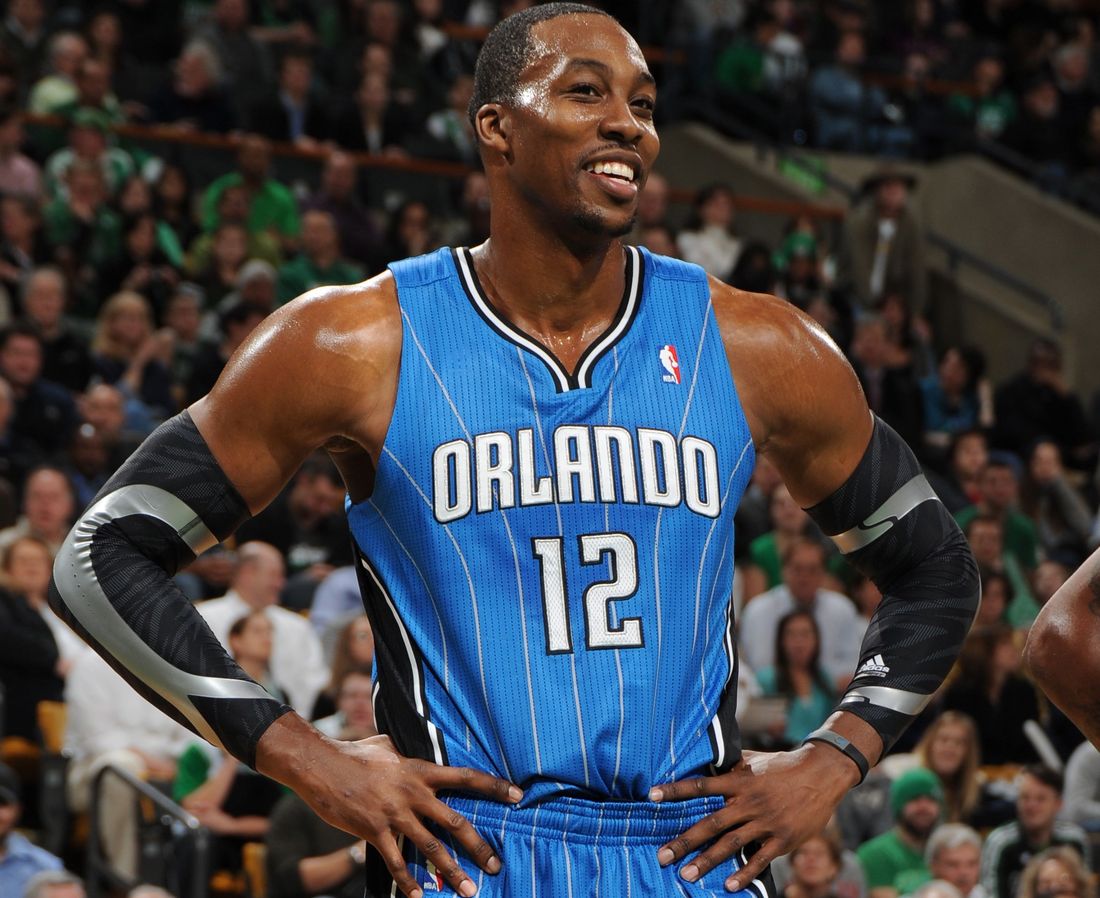 Maybe it was the spandex tank tops he warmed up in, but either way: In person, Dwight Howard honest-to-God looks like a f**king superhero. Seven feet tall with biceps the size of my thighs, arms that stretch forever, shoulders carved out of marble, and a back full of bulging muscles I didn't know existed. It sounds strange for a man to be this impressed with another man's body. I know. But Dwight is just that impressive.

Dwight's done some incredible things on the court, but just seeing him is what sticks with you for years. It's like he's the by-product of basketball eugenics, or the answer to, "What would the perfect big man look like?" Shaq called himself Superman, too, but at his peak, he actually looked pretty doughy up close. Dwight's like a Greek statue or something.

All of which brings us to this week's news: Dwight Howard is having back surgery and will miss the rest of the NBA season, the playoffs and the Olympics. It's big news. Not because anyone thought the Magic were contenders with Dwight, but because it means Dwight Howard is human.

In the previous seven years of his career, Dwight's missed seven games. SEVEN. Some of that's luck, but consider the beating he's taken down low since practically his first game, and it gets even more incredible. By comparison, Shaq missed 47 games over his first seven years. For his entire career, Dwight's been pretty much indestructible. Now, not so much.

The timing is suspicious. Just a few weeks after his coach publicly calls him out, Dwight turns into a ghost, and then, after a reporter says he's refusing to play for the coach who called him out, we get an abrupt announcement that Dwight's having back surgery that'll force him to miss the Olympics.

Is skipping the Olympics worth it if it means saving face? Magic officials were reportedly skeptical of his back issues as recently as three weeks ago. Could surgery be a way to counter the backlash he'd get for skipping out on the rest of Orlando's season? Or is Dwight's back worse than anyone realized? There's a good chance we'll never get any answers. It's probably unfair to doubt Dwight, but no player in sports has done more to forfeit the benefit of the doubt this year, so skepticism's inevitable.

And here's what sucks: If it's really bad enough for Dwight to miss the next six months, then the rest of his career could look a lot different than what we expected. Back problems don't just go away. If this is serious, then it could seriously rob a once-in-a-generation athlete of the second half of his prime. That's sad to think about. If the injury and surgery isn't as serious as Dwight's making it sound, then the whole thing is even sadder.

For now, it's just the perfect ending to a year that somehow finds a way to get worse every other week. It's been a disaster for Dwight all the way around. On the court, in the media, with his coach, his agent, fans in Orlando. Nobody knows exactly what's wrong. Maybe it's been his back all along, which is as scary an explanation as anything else. Scary for Dwight, and maybe sad for the rest of us. The NBA's more fun with superheros like Dwight Howard.

But guys like Iverson, Shaq, LeBron ... I'll always remember them for what they've done on the court. LeBron can disappear in the NBA Finals for the next 10 years, but when he's hitting on all cylinders, he's Jordan, Bird, Magic, and every other Basketball God you can name.

With Dwight, I'm starting to think of Vince Carter. He was every bit as outrageously gifted as Iverson, Shaq and LeBron. As awe-inspiring as Dwight's physical tools are, Vince's athleticism was the same way. You could watch him in warm-ups and spend the rest of the night remembering one dunk. But then, we kept waiting for him to deliver on all the potential, and one day he hit a tipping point. He forced his way out of Toronto, injuries set in, and as he hobbled around the perimeter for the next five years, he just fell further and further away from being the player we'd expected all along. Eventually he stopped being the guy everyone remembers with awe, and he became immortal for everything he never became.

Dwight's been at the center of all kinds of negative press this year, but as much as he's earned the criticism, we don't want to watch him become the Vince Carter of big men.

Now, he's off to spend the summer alone, away from everything, and next year he'll probably be playing for a new team. Here's to hoping he works it out. Whatever "it" is. We don't know how it ends, but right now, The Dwight Howard Experience is memorable for all the worst reasons.

As LeBron said Thursday night, "It sucks, honestly. I wish him the best."