The Los Angeles Clippers, needing a home win over the New Orleans Hornets to move into a tie for third place in the Western Conference, played very poorly in the third quarter. They entered the fourth quarter down by 10 points and didn't really start playing good ball until halfway through the quarter. With just about six minutes remaining, Chris Paul decided that he didn't want the Clippers to lose.

Chris Paul is good enough that he can simply decide that his team is not going to lose a game. Evidence of this phenomenon can be found in a video after the jump, in which he sets up a dunk with a steal and a no-look pass.

I'm not particularly sure how he even knew that Eric Bledsoe was running behind him to pick up the ball. This came just seconds after Chris Paul made a layup, and those two plays sparked a huge run by the Clips. Three minutes later, they took the lead and held it to the end of the game, winning 107-98. Paul finished the game with 33 points, 13 assists and eight steals. The exclamation point was this dunk by Blake Griffin, assisted by Paul. 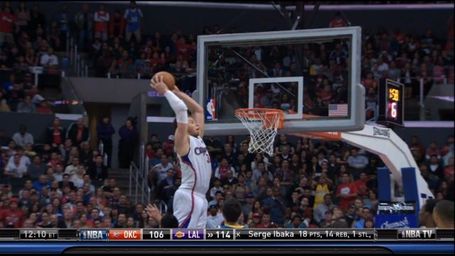 Even by his standards, this was absolutely ridiculous. How does someone get that far above the rim? The Clippers should have to play with an 11-foot hoop.

Both the video and image come from the wonderful @Jose3030.