The NBA Awards Extravaganza! Our Picks For 2012's Best

The regular season's winding down and the playoffs are approaching, so it's time to hand out NBA Awards. From Rookie of the Year, to All-NBA teams, to MVP, it's time to make our picks.

Share All sharing options for: The NBA Awards Extravaganza! Our Picks For 2012's Best

Half the NBA is tanking this week while the other half is resting stars for the playoffs, and that can only mean one thing. It's time for awards season!

Before we dive in, one quick note.

Remember last year when Tom Thibodeau won Coach of the Year and Derrick Rose won MVP, and then LeBron James completely shut down Rose in the Eastern Conference Finals, Thibodeau was helpless game-planning against Miami's D and the Bulls got waxed in five games? Always remember: No matter who wins, these awards mean almost nothing.

Rookie Of The Year 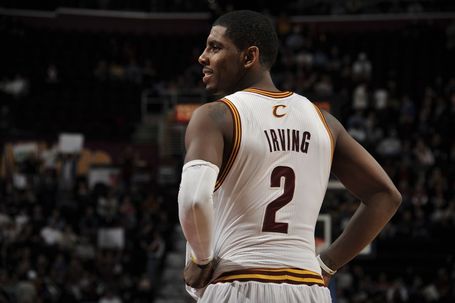 KYRIE IRVING — The easiest choice on the board. Ricky Rubio could have made things interesting had he stayed healthy all year, but once he went down, it was Kyrie's race to lose. He averaged 18.5 points and 5.5 assists, and made a lot of people (including me) look like fools for doubting his ability to step into a superstar's role. And if you can't root for Kyrie after reading Lee Jenkins' SI profile from earlier this year, then I don't know what to tell ya:

Kyrie's mother, Elizabeth, died of a blood infection when he was four, leaving Drederick to raise him and his older sister, Asia. Dred, as he's known, grew up playing basketball at the Mitchel Houses in the Bronx, was MVP at Rucker Park and the second-leading scorer in school history at Boston University. He played professionally in Australia, where Kyrie was born, and during pro-am games he parked the stroller at the end of the bench. If Kyrie was fussy, Dred called timeout and fed him a bottle. "He watched everything," Dred says. The family settled in West Orange, N.J., where Dred ran Kyrie through Mikan drills in the backyard and showed him how to spin layups off the cracked backboard. On weekends Dred took him to the Mitchel Houses for a taste of the blacktop.

But think about it ... he only played eleven games in Durham due to injury, he returned in the tournament and played his ass off while ALSO disrupting Duke's chemistry at the worst time possible, his NBA decision process inspired some of the best Duke sanctimony we've seen since Elton Brand, and finally, he surprised everyone in Durham and went pro, leaving Duke basketball in shambles this year. Kyrie Irving's probably my favorite Duke player of all time.

Defensive Player Of The Year

TYSON CHANDLER — The Knicks went from 21st in defensive efficiency last season to fifth this year, and it all comes back to Chandler. He was maybe the most valuable player in the NBA Finals last season, and he's carried it over to his time with the Knicks. He's the best help defender in the NBA, he protects the rim as well as anyone, and if this award is the defensive counterpart to MVP, there's nobody in the NBA more valuable than Tyson Chandler.

Sixth Man Of The Year 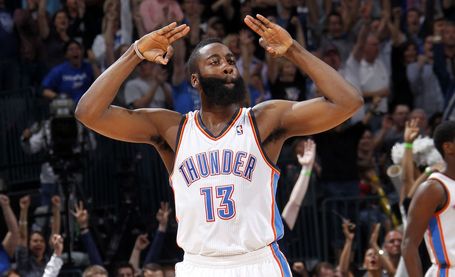 JAMES HARDEN — Another easy choice. If all the other sixth man candidates are Little Leaguers playing by the rules, Harden is Danny Almonte. If this were the Rodney Dangerfield movie Ladybugs, Harden is Dangerfield's son in that movie. He's the ringer here. It's kind of unfair to some of the other sixth men in the league because Harden's better than most starters in the NBA, but that's the way it goes. As a sixth man, he's the second most valuable player to one of the three or four best teams in the NBA. 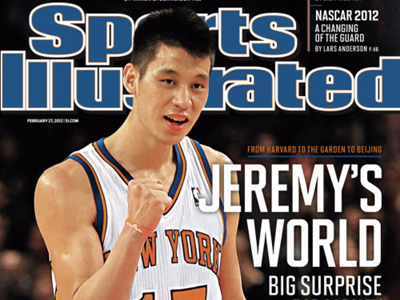 JEREMY LIN — Say what you want about #Linsanity in retrospect, but it'll be a long time before we see a D-Leaguer who was praying not to get cut accidentally rise to the top of the NBA, land on two consecutive Sports Illustrated covers, hit game-winners, do a convincing Steve Nash imitation and become the biggest superstar on the most famous team in the league. Even if it only lasted five or six weeks, the sheer insanity of his evolution is enough to make him the pick here.

Coach Of The Year

GREGG POPOVICH, TOM THIBODEAU — A tie! Isn't it great that the two best coaches in basketball are named "Thibs" and "Pop"? They just sound like coaches. Or mobsters, maybe.

In any case, this one's too close to call, and in a perfect world they'd share the honor. Popovich's Spurs play harder than any team in the league, and no team did a better job of managing veteran minutes and rest in a short season while also competing on a nightly basis. While Thibs was depending on guys like John Lucas and Taj Gibson, Pop was depending on Kawhi Leonard and Danny Green ... and they both made it work better than any team in the NBA. There's a reason the Bulls and Spurs are top seeds headed into the playoffs.

Executive Of The Year 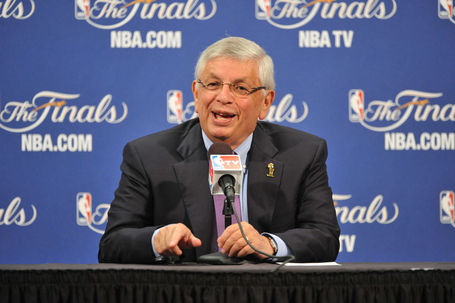 DAVID STERN — On behalf of Donald Sterling's Clippers, of course. No team made a bigger leap this year, and it's all thanks to Stern's infinite wisdom back in December. Plus, he successfully squeezed NBA players out of billions in revenue, and ended the lockout juuuuust before we were all ready to turn on him forever. All in all, quite a run. The only other contender is Rich Cho in Charlotte, who executed the most ambitious tank job the NBA has ever seen.

Thank God for Anthony Davis, because otherwise we'd have to think seriously about grandfathering Andrew Bynum into the next seven All-NBA First Teams by default. He's good, but not that good. Everyone else on that team is pretty self-explanatory. Deciding between Paul and Tony Parker was tough, but considering Paul is playing for the most dysfunctional organization in sports AND maybe the most clueless coach in the NBA (as opposed to Popovich and the Spurs), CP3 gets the edge.

Why can't this be a real team? They'd score 150 points-a-game and Rajon Rondo would average 45 assists a night. Goddamnit. At the very least, they should get together and film a Nike commercial.

This team is sponsored by death and back spasms.

5. Steve Nash -- All due respect to Jared Dudley, Marcin Gortat, and Grant Hill, but turning this Suns roster into a quasi-respectable team might be the most incredible thing Steve Nash has ever done. Please God let him end up on a contender for the last few years of his career.

4. Kevin Love -- How many times does a guy have to go for 30 and 20 before people pay attention? His best season statistically (26 and 13) stacks up to the best seasons of any big man, ever. Defense is still an issue, but he did EVERYTHING for the T-Wolves, and until Rubio went down, they were well within striking distance of the playoffs. This won't be the last time we hear Love's name in the MVP discussion.

3. Kevin Durant -- Will probably lead the league in scoring for the third straight year. Durant got much better defensively and his team has turned into one of the NBA's two or three elite teams. He's going to be in the top three of this discussion for the next decade. It'd be nice if he got more easy buckets in the post (a la Dirk), but even as an unfinished product, he was vicious all year long. Almost stole the MVP, might steal the NBA title instead.

2. Chris Paul -- The best point guard on earth. He's the runner-up for turning a half-assed Clippers roster into a four seed in the crowded West, and also because he's done it while playing with two of the most one-dimensional offensive players in the league (Blake Griffin and DeAndre Jordan), a coach who's essentially clueless (V-D-N! V-D-N!) and a franchise atmosphere that was poisoned for decades before he got there. CP3's presence changed all that.

Earlier this year I talked to an NBA photographer in L.A. who mentioned the Clippers:

"I've been in locker rooms where they haven't been having fun. I've unfortunately been around the Clippers since they moved in 1984. And there were A LOT of down years."

"I just came off a road trip with the Clippers. It was fantastic. The camaraderie. They do everything together as a team. I don't think I've ever really seen that. Where the whole team goes out to dinner, the whole team goes to the movies. And being a fly on the wall is super fun."

Maybe CP3 doesn't deserve all of the credit for turning that atmosphere around, but he was the catalyst that transformed them from one of the best bad teams to one of the best teams, period. Considering the landscape he inherited, that's pretty unbelievable. 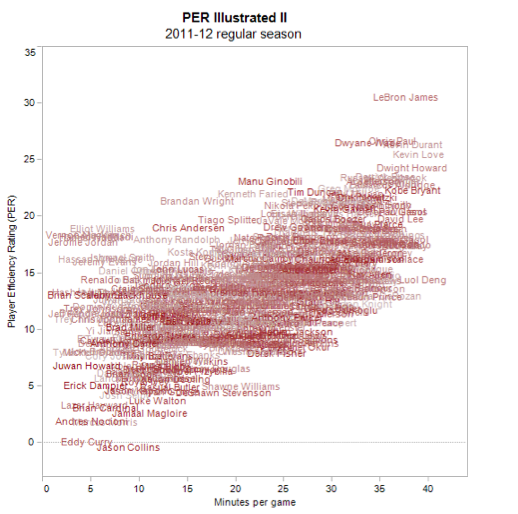 But that graph -- from ESPN's Tom Haberstroh -- is more convincing than anything anyone else can say. He's so far removed from his competition that discussing any alternative MVP contenders is just a waste of time. Plus, while guys like Kobe, Melo, CP3 and Dwight have all missed significant chunks of time at various points this year, LeBron's played all but two games of this year's compressed schedule (yet another reminder that he's the superhuman result of a genetics experiment co-sponsored by Nike and the Illuminati).

Miami's needed him more than ever this year and Bron's delivered over and over on both ends of the floor while looking effortless doing it. Now, will he ever do it in the NBA Finals?