PROJECTION: Heat Vs. Knicks Has Potential For Drama

Share All sharing options for: PROJECTION: Heat Vs. Knicks Has Potential For Drama

The Miami Heat are certainly one of the NBA's power clubs. The New York Knicks probably are not at that level just yet. But the Log5 projection system, while favoring the Heat strongly, certainly believes that the series, which tips off Saturday in South Beach, has the potential to be a tight, long one.

A map of the Log5 projections for this series is after the jump. 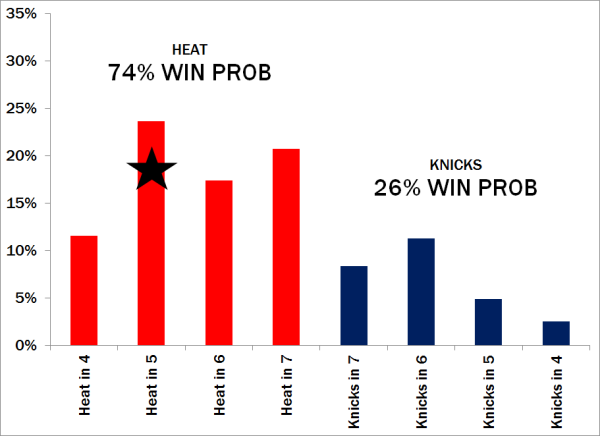 Of course, Miami only needs to hold serve at home and peel off one game at Madison Square Garden to end the series in five. But there's just a 47 percent probability that the Heat will start the series 2-0 according to the projections -- hardly a sure thing. That plus the Knicks' decent chances at home adds up to the Heat having such a low probability (12 percent) of winning a sweep.

But in the end, the Heat enter a stronger team, and Log5 does prefer them in the series.

Heat Finish Off Knicks In 5, Advance To Face Pacers