The Clippers Shock The Grizzlies, And The NBA Playoffs Are Officially Back

Chris Paul and the Clippers stunned the Memphis Grizzlies Sunday with a comeback that included a 28-3 run, and ended with a Game 1 win on the road. It's nice to have NBA Playoffs back in our lives.

Share All sharing options for: The Clippers Shock The Grizzlies, And The NBA Playoffs Are Officially Back

The NBA Playoffs arrived with a thud this weekend, and then Clippers-Grizzlies happened and we all remembered why we're here. Memphis dominated the first three quarters, led, 95-71, with nine minutes to go in the fourth, and the Clippers won. Let's just take a moment breathe in the insanity of that sentence.

THAT is why we love the NBA Playoffs. Because of the nights where the only appropriate reaction is "Holy shit, that was just ... awesome." And after a weekend dominated by refs, superstar injuries, stupid controversies, blow-outs and Rajon Rondo's (probable) suspension, we needed one of those nights.

So to celebrate the Clippers saving us from a day's worth of "These playoffs have been terrible!" columns, let's take a look back.

— There are two reasons the Grizz had a 20-point lead for 75 percent of the game. First, the Clips were totally out of sync all first half. Chris Paul and Blake Griffin were invisible (and on the bench for much of the second quarter), and it helped Memphis built a 19-point lead headed into halftime.

Then, as the Clippers clawed back in the third, it didn't matter, because at that point, Mike Conley looked like Gary Payton crossed with Mark Price. He was unconscious from three (4-4 in the quarter), O.J. Mayo chipped in instant offense of his own, and the Grizzlies big men went into autopilot mode. Not that you can blame them. When shots are falling like that and you're already up 20, would YOU bear down and pound it into the post?

— Blake Griffin was totally exposed. His lack of post moves was always going to be a problem in the playoffs. He can't get easy half-court buckets against anyone, but with Zach Randolph and Marc Gasol in his way, it's even worse. So with the Grizzlies hitting everything on one end and Blake lost on the other, it wasn't just the game that looked hopeless, but the entire series, and maybe the future of The Blake Griffin Bandwagon.

— Here's where we pause. You know, just to remind everyone that Floyd Mayweather apparently bet $1.8 million on the Clippers Sunday night.

Just one more reason this game was awesome. So, how did the Clips come back?

— REGGIE MOTHERF'N EVANS. It all started with him. 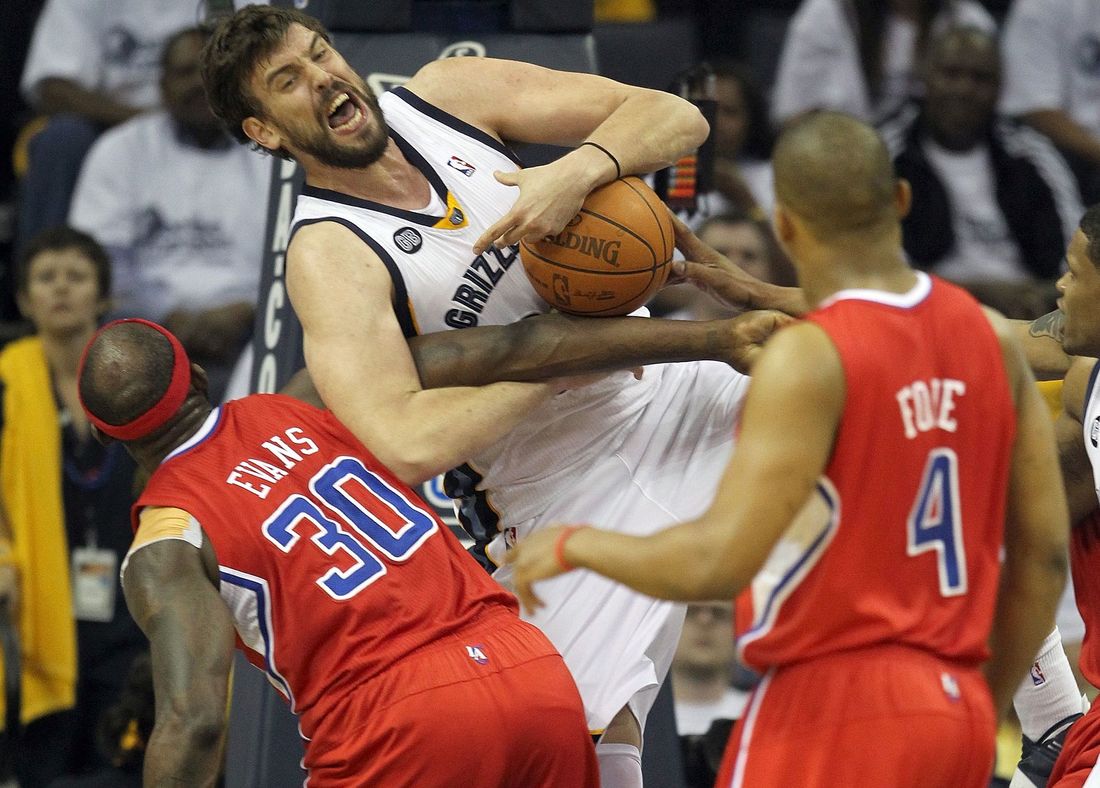 But see, the playoffs are where guys like Evans become twice as valuable. If the game ever turns into a full-court death match, Reggie Evans would be the runaway favorite for MVP.*

In the second half, he got physical with the Memphis big men, patrolled the paint, controlled the glass (13 boards), and gave the Clips the extra dose of toughness that had been invisible in the first half. If you're looking at the second half and wondering why Memphis' dominant big men couldn't dominate the Clippers, Evans is the obvious answer. Chris Paul was every bit as fantastic as you'd expect, but without Evans setting the tone down low, his efforts would've been meaningless.

* Battle royale scenarios do not include Z-Bo's entourage, the obvious choice for MVP if they make it onto the court with or without pool cues.

— Nick Young? Nick Young! Imagine telling an NBA fan back in February, "Come April, Nick Young will A) be playing in the NBA Playoffs, and B) be the MVP of one of the most incredible comebacks in playoff history." You wouldn't have even gotten laughs, just a lot of concerned stares.

Swaggy P was out of his mind Sunday night, and as someone who watched his entire career unfold in Washington, it was surprising, but not THAT surprising. When Nick Young's cold, he's a parody of NBA players. Like, literally the exact player stupid college basketball fans talk about when they complain about the pro game. Complete with matador defense, one-on-one offense, horrible jump shots early in the shot clock, and ABSOLUTELY NO PASSING.

But when he gets hot ... he's as dangerous as anybody in the league. His athleticism makes him more or less unguardable, and we all know he's not afraid to shoot, so as a pure scorer off the bench, he becomes sorta terrifying when his jumpers are falling. This is why he always made more sense for a contender that could afford to use him as a luxury instead of a crappy team that needed him every night. For the Clippers, Nick Young is perfect.

Anyway, after the Clippers chipped away at the big lead and cut it to 12, TNT's Dick Stockton told us, "It's a four-possession game!"

"Easy there, Dick," America thought. But sure enough, Swaggy P hit three straight threes to make it a three-point game, and suddenly the blow-out became an instant classic. The lesson here: Never doubt Dick, and never doubt Nick. Or something. This game was the best.

— Where the Grizzlies went wrong. Credit the Clippers for putting together the comeback, but any time a team closes the game on a 28-3 run, it's not just, "Hey, they played great!" The Grizzlies were a mess down the stretch. They were in autopilot right up until the final minute, when they finally realized that, "Shit, we might actually lose this game."

But by that point they had no rhythm on offense, and left it all up to Rudy Gay to create in the halfcourt. Their good fortune in the third (Conley's shooting) cost them down the stretch. They'd been coasting since halfway through the third, and their two best players (Gasol and Z-Bo) had scored two points in the second half. They never had to establish an offensive flow, then when they needed it to stop the bleeding, they had no go-to options on offense.

Also: Where was Tony Allen? He spent most of the fourth quarter on the bench, and when you're talking about guys like Nick Young and Chris Paul wreaking havoc, it sure seems like it might have been a good idea for Lionel Hollins to put the NBA's best perimeter defender on the court.

— The last shot that made no sense. As Charles Barkley pointed out on TNT afterward, the whole, "pull it out and run iso" last-second play is cool and all, but not when you're down one with 23 seconds left. Coming out of a timeout, Lionel Hollins should've had the Grizzlies at least attacking the rim. Worst case scenario, they miss a shot with 5-10 seconds left, foul, and then have a chance at a last-second three to win or tie. The iso play is fine if you're tied and have nothing to lose, but when you're down one with plenty of time left, the "Rudy Gay iso" is just stupid. 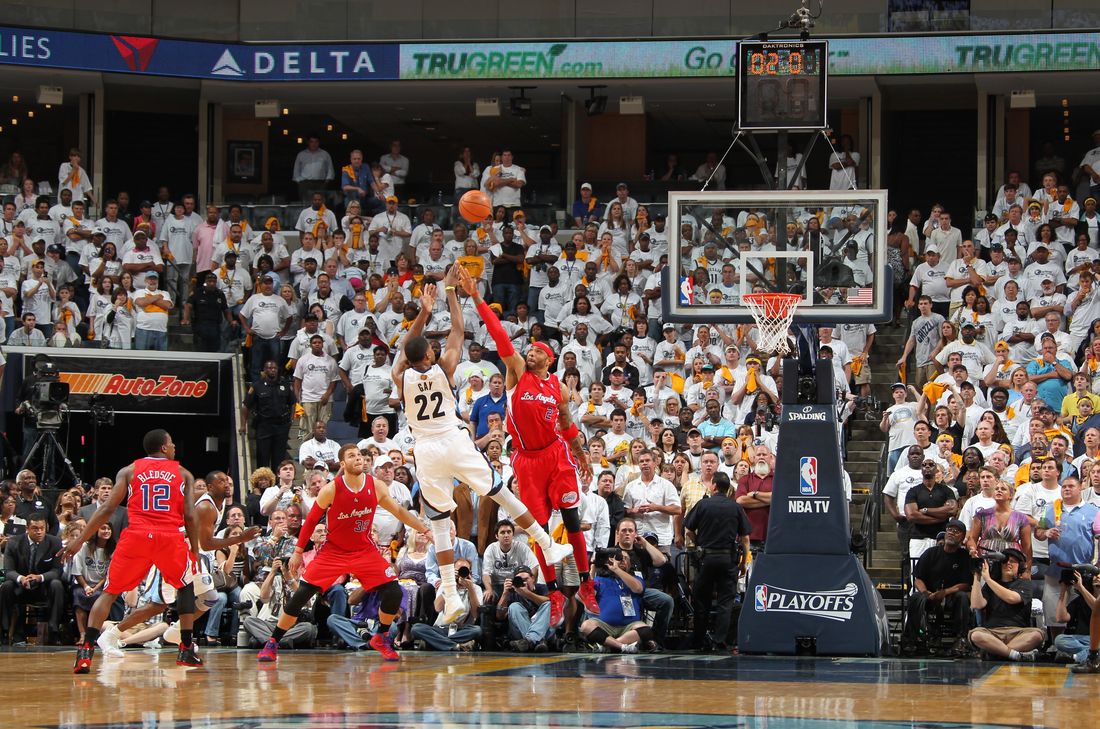 And that's how the Clippers pulled it off: Memphis fell asleep at the wheel, Chris Paul and Reggie Evans helped L.A. claw within striking distance, Nick Young made it a three point game, and when things got tight, Blake Griffin hit two huge free throws, and on the final possessions, Paul created all the easy points in crunch time that Memphis couldn't come up with.

Which is a good reminder: Chris Paul. With L.A. down 24, he was probably the only person in America who still thought they had a chance to win, and he's the biggest reason they never quit. Think about it. Over the past 25 years, the Clippers would have either rolled over in this situation, or they'd have been the team blowing the 20-point lead. CP3 changes all that. He fought his ass off all second half, got chippy when he needed to, ran the break to perfection, scored and dished in crunch time, and by the end, L.A. shocked everyone and Floyd Mayweather came up with the most miraculous cover in Vegas history.

All in all, a good reminder of why it's worth it to stay up late for the NBA Playoffs, complete with Chris Paul making fun of Craig Sager post-game ("That's a nice suit you got on. Easter's passed, though"), and Kenny Smith giving the Memphis Grizzlies a lesson on fire safety. ("When the house is on fire, you gotta calm down. You gotta get everyone under control to get out of this building alive.")

Afterward, Lionel Hollins told the media, "I'm disappointed that we lost, but there's a lot of basketball left to be played." Can't wait.