Josh Smith Took A Terrible Shot, But That's Too Simplistic

Share All sharing options for: Josh Smith Took A Terrible Shot, But That's Too Simplistic

Everyone watching Game 6 of the 2012 NBA Playoffs between the Boston Celtics and the Atlanta Hawks laughed when Josh Smith took a contested 20-footer with his team down one with under 10 seconds left. There's Josh Smith being Josh Smith! Etc.

To a certain extent, this is true. That was a pretty terrible shot by Smith. But those criticizing Smith for his shot are looking too much at the results and not enough at the process. Let's break down this play. Here's video:

Focus on the part before Smith takes the shot. The Hawks swing the ball to Marvin Williams, and Al Horford pops to the left elbow. Meanwhile, Smith is supposed to duck inside of Brandon Bass and post him up, preferably inside the paint.

Everything seems to work pretty well. The only problem: the Celtics are grabbing Horford and Smith like crazy. First, Horford has to shed Kevin Garnett's bear hug to catch the ball by the three-point line. Then, Smith is grabbed with two hands by Bass, preventing him from diving down the lane to catch the pass. Here's a screenshot of the latter. 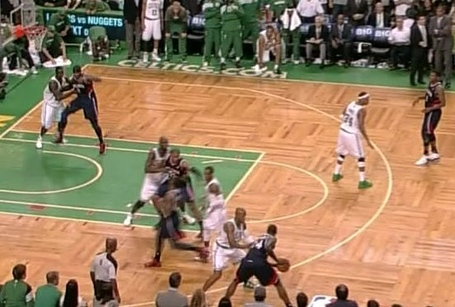 Now, you could -- and potentially should -- argue that this is PLAYOFF BASKETBALL and no fouls can be called off the ball in these situations. But if you're wondering why the Hawks' set didn't look like a set, it's because of this. Eventually, because Atlanta's first option was cut off, Horford had to swing the ball to Joe Johnson, who tried a pick and pop with Smith that eventually put Smith in the position he was in.

So yes, feel free to blame the Hawks. Just know that the issue is not that they didn't run a play, it's that they ran a play that failed because the Celtics were grabbing them knowing the referees would swallow their whistles.

Celtics Close Out Series With Hawks, Advance To Play Sixers In Second Round