Ivan Johnson has quite a contentious history when it comes to his middle finger. It isn't that injuries have been a problem with the finger next to his pointer, however -- he just enjoys the old-timey tradition of showing disrespect to things he doesn't agree with by showing off his digitus medius.

The most recent situation happened on Thursday night, when, following a loss to the Boston Celtics, the reserve power forward for the Atlanta Hawks gave a ridiculing fan a piece of his mind ... by inserting his finger into the face of a random supporter clad in a Celtics jersey. 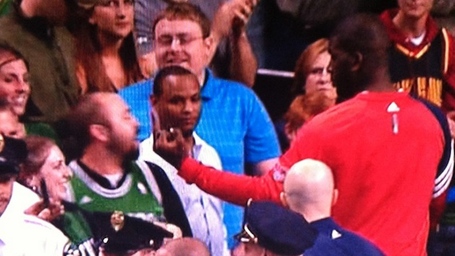 It's a good thing that Twitter's Austin Espinoza caught this important part of the game -- and that the fellas at Yahoo! Sports' Ball Don't Lie unearthed it for the world to see -- for all of the world to witness. Not only because it adds to the legacy that is Ivan Johnson, 28-Year-Old Rookie Who Led The NBA D-League In Technical Fouls, but also because this isn't the first time that Johnson has been caught with his finger in the air near a basketball court.

The story was recounted quite a few times on national television broadcasts this season, but the facts of Johnson being banned in Korea have always been a bit blurry ... until now. After quite a bit of Internet detective work, we've found the news story that tells of the time Johnson earned a lifetime ban from the Korean Basketball League for "flicking off" an official.

South Korea's professional basketball league has permanently banned an American player for flicking off a referee at the final game of the championship series, the sport's governing body said Friday.

According to the Korea Basketball League (KBL), Ivan Johnson, who played for the Jeonju KCC Egis last season, raised his middle finger towards a referee after his team lost to Ulsan Mobis Phoebis at the final game of the championship series on Sunday.

After the game, the KBL held a disciplinary committee meeting and decided to permanently expel Johnson while imposing a 5 million won (4,448 U.S. dollars) fine as well.

The most interesting part of the story was actually buried in the final paragraph, however, as it brings to light even more (!!!) instances of Johnson using his middle finger to alleviate his frustrations.

Yours truly watched Johnson's entire NBA D-League season following the Korean ban and, at least as far as I can remember, none of the 23 technical fouls he picked up over the course of 49 D-League games were due to his use of the middle finger. It would seem now that I may have missed some, however, considering his propensity for doing the dang thing.

Reading all of this might lead one to believe that Johnson is the athletic world's foremost leader in "flipping the bird," but he certainly isn't the first athlete to signal his displeasure using the middle finger. According to the BBC's research, that distinction can be traced back to baseball in 1886.

The middle finger, which Dr. Morris says probably arrived in the US with Italian immigrants, is documented in the US as early as 1886, when a pitcher for the Boston Beaneaters gave it in a joint team photograph with the rival New York Giants.

It's kind of like the circle of life, then, seeing as how the earliest and latest incidents involving the middle finger in sports can both be traced back to Boston. It's unclear if that's in any way related to this important poll, but it does seem like something to keep in mind going forward.

Celtics Close Out Series With Hawks, Advance To Play Sixers In Second Round