KD Comes Through, Kobe Breaks Down And The Thunder Are Up 2-0

Kobe Bryant couldn't come through for the Lakers in Game 2, and Kevin Durant was the star instead as the Thunder rallied late and took 2-0 series lead.

Share All sharing options for: KD Comes Through, Kobe Breaks Down And The Thunder Are Up 2-0

For the Lakers, you gotta think Game 2 was even more of a backbreaker than the 29-point Game 1 loss to the Oklahoma City Thunder on Monday night. They were up seven points with two minutes left, sure, but more importantly, that's as bad as the Thunder will ever look in this series. And the Lakers still couldn't get the win.

Kevin Durant delivered, Kobe Bryant didn't, and now the Thunder are headed to L.A. up 2-0. Or technically speaking, Kobe didn't deliver, leaving the door open for Durant, and ... well, you know.

You can see video of Durant's game-winner here. The key on that play: Instead of doing that NBA thing where the star lurks five feet behind the three-point line for 20 seconds and then takes a constested, fadeaway three, Durant got a screen and went hard to the hoop.

Meanwhile, here were Kobe's last five shots according to the play-by-play:

There were also two turnovers thrown in there. Granted, a few of those were desperation looks after LA's offense broke down trying to get it to Andrew Bynum. But still.

If any one of those possessions turns into a bucket, Kobe and the Lakers probably go back to L.A. with a split. Even with all the misses and bad shots, Kobe still had a chance at a game-winner in the final 18 seconds. OKC had a foul to give, though. So, after Kobe ran the clock down to five seconds (doing that NBA thing where superstars just stand around waiting to take the last shot), Thabo Sefolosha fouled him and L.A. took the ball out of bounds. Kobe never saw the ball again, and Steve Blake missed the would-be game-winner.

Had he attacked the rim earlier on that final play (instead of doing that NBA thing where the superstar settles for a 20-foot jumper), two things could've happened. Either ...

Hindsight is 20/20, Kobe is Kobe and you can't reason with crazy. But thinking about that game afterward, it's not a coincidence that OKC came back with layups and dunks from James Harden and Durant, while the Lakers died with a broken-down offense that left them depending on Kobe to save them in the final two minutes.

Everyone's constantly debating "hero ball" and the best ways to win in crunch time, and it's a spectrum with two poles. There's LeBron James, the MVP/Incredible Hulk who doesn't always take (or want?) the last shot, and Kobe, the psychopath who takes the last shot at all costs and seems addicted to taking (and sometimes making) impossible game-winners. But there's a middle ground on that spectrum, and that's where Durant came through Wednesday night.

Which is to say ... superstars should have the ball in their hands with the game on the line, but they don't have to make things harder than they should be. Go to the rim, and good things will happen.

Now, a few other thoughts on Wednesday's Game 2. 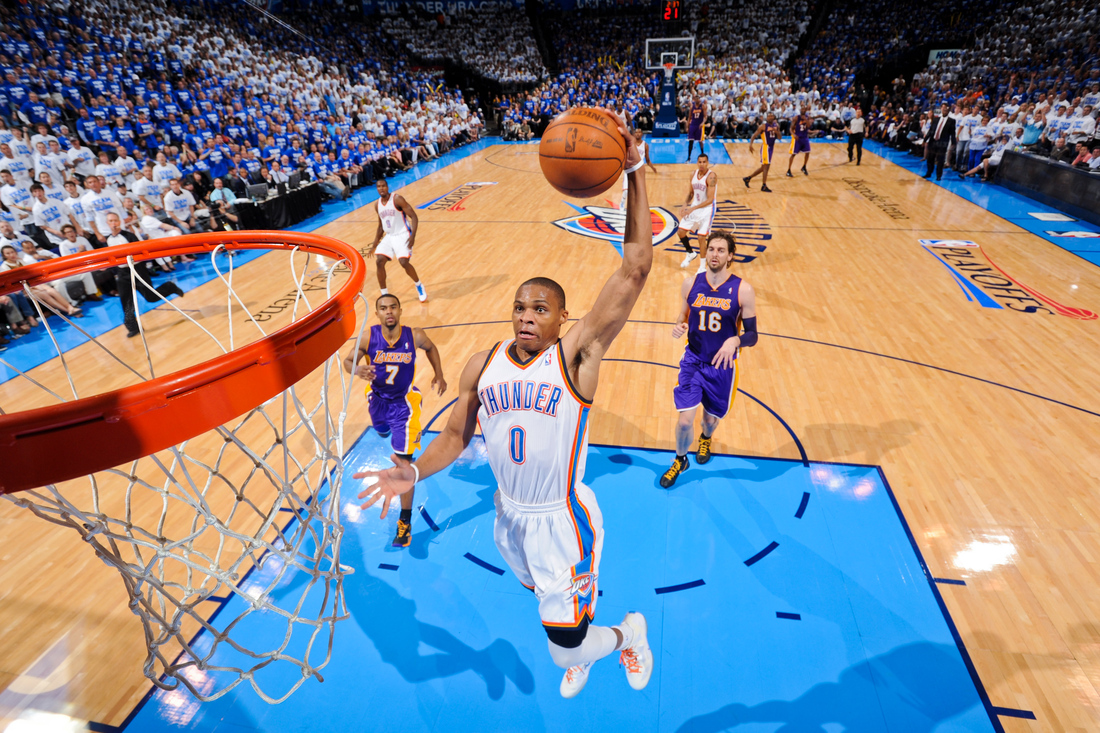 RUSSELL WESTBROOK IS THE BEST

From Tuesday's piece on the Thunder:

For L.A. to have a chance, then, they've gotta hope that the KD's jumpers don't fall, and Westbrook makes bad decisions.

Actually, we found out Tuesday that L.A.'s best chance is when Westbrook's jumpers don't fall, because then Westbrook tends to make bad decisions. After looking poised, dominant and completely unstoppable in Game 1, Russ regressed to his 2010 self in Game 2. He forced bad shots, he freaked out in the huddle at one point, and just in general, you got the feeling that OKC was in much better hands giving the ball to Harden down the stretch.

All of which is fine and not even that surprising.

There was one moment Wednesday where I fell in love, though. After Steve Blake threw the ball off Kobe's hands and out of bounds, the refs initially gave the ball back to L.A., and Westbrook just about lost it. He was literally jumping up and down, screaming, and if he hadn't had the sense to at least walk away from the ref he almost certainly would've gotten a technical. If it had been any other point in the game, he would have gotten a technical. That's why you can't help but love Russ. He can't help himself. He's a ball of raw emotion on the court, which makes it doubly fun that his emotions are as manic as anyone in the NBA.

As great as Harden and Durant have been, Westbrook may be the most important piece. When he plays well and makes good decisions, they're just about unstoppable on offense. When he struggles, he has the potential to take the whole offense down with him. So OKC's title chances sorta depend on Westbrook, the manic, ADHD version of Derrick Rose? Yes, exactly. That's just one more reason to be in love with the Thunder.

"They got a lotta big ol' women in San Antonio." --Charles Barkley, 46th President of the United States.

I know everyone in L.A. thinks Bynum could be the next Shaq if he'd only learn to apply himself, but I just don't totally get it. He's good, but good enough for L.A. to spend the final five minutes of the game trying to get it to him down low? Good enough for the Lakers to choose him over Dwight Howard? Good enough to put up with his bizarre mood swings? I don't get it. If anything, his strange behavior is a convenient allibi distracting the Lakers from the larger truth in all this: in the end, he's not that good.

On the one hand, Mike Brown's one of the best defensive coaches in the league, and his adjustments Wednesday helped force OKC into a much tougher game than they got in Game 1. For one thing, the Lakers sagged off Serge Ibaka in the corner and swarmed Durant/Westbrook/Harden anytime they drove the lane, forcing them to give it up to Ibaka for a series of clanged jumpshots. All told, the adjustments worked. OKC was lifeless until the final two minutes.

On the other hand ... he was powerless to stop the bleeding as OKC came back, he botched the inbounds play coming out of a timeout and then he blamed Metta World Peace for not passing to Kobe, even though A) Kobe wasn't open and B) the shot they got instead was just about as good a look as you can hope for in the final seconds. If you were a Laker fan, would YOU have confidence in Mike Brown?

AND THE NBA'S FASHION BONANZA ROLLS ON

I love this game. 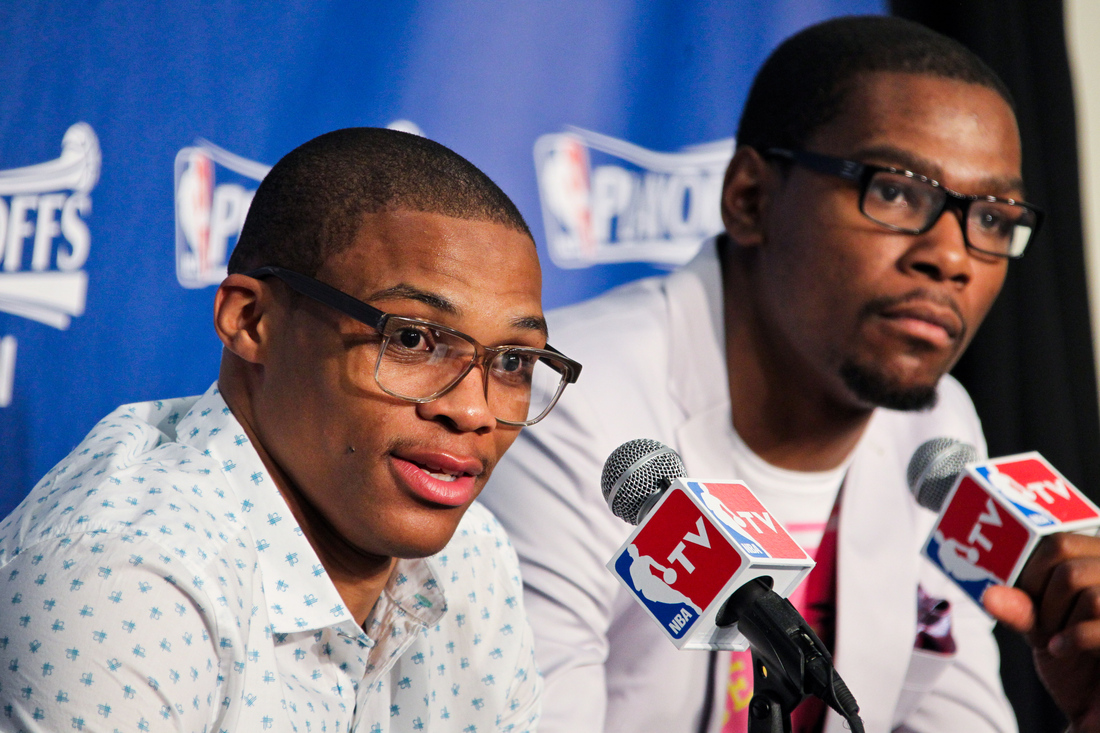