Share All sharing options for: The Dream Team Book We Always Wanted Is Finally (Almost) Here

Luckily, Sports Illustrated's Jack McCallum put together just that! It won't be released until July, but you can pre-order it here. And today, he released the prologue on his website.

After the jump, three highlights from the prologue to whet your appetite.

I had gotten a restaurant recommendation from a friend—this was before the days of go-on-the-Internet-and-check- out-Zagat—and it was a bad choice. They brought out quail eggs for an appetizer.

"Man, I don’t eat this shit," said Malone, a country boy from Louisiana who never hesitated to remind you of that fact.

2. Journalists Are Fans Too, And Larry Bird's Got Jokes

I couldn’t separate the voices, but there was much clamor and clapping; it suggested Croatia was about to enter a world of pain, which it subsequently did. Suddenly Magic halted the procession so that—I’m mortified even as I write this—Dupree and I could be photographed with the team. It was as if a gang of warriors on the way to battle had been halted to share hors d’oeuvres with Ander- son Cooper. There were several expressions of what-the-hell-are- we-doing? confusion, but the team stopped, Dupree and I slipped into the front row, and NBA photographer Andy Bernstein prepared to take the least compelling photo of his illustrious career.

And as we posed—my groin tight, flop sweat soaking my brow, praying that this moment would soon be over—I heard a voice from the back row, one with a distinctive Hoosier twang.

3. How The Dream Team Got Its Name

The opening to my story in the following week’s magazine read:

It’s a red, white and blue dream: the five players who grace this week’s cover playing together, determined to restore America’s lost basketball dignity, in the 1992 Olympic Games in Barcelona. What’s the chance of this dream coming true? Not bad. Not bad at all.

The cover photo was accompanied by the tagline "Dream Team," right up by the Sports Illustrated logo.

So there it was for the first time: Dream Team.

This book could be 1,000 pages long and I think I'd still finish it all in one sitting. 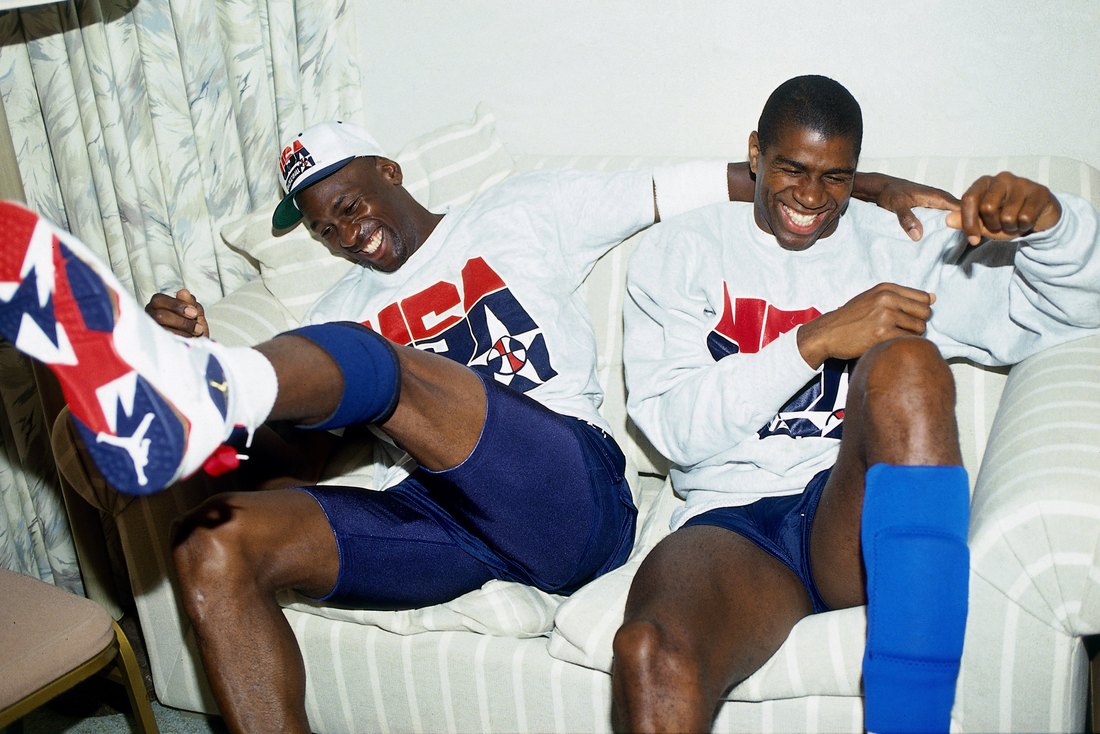 Jordan and Magic at the Olympics. ©Andrew D. Bernstein/NBAE/Getty Images