PHOTO: Ben Wallace Drives A Car From The Future, Calls It A 'T-Rex'

Share All sharing options for: PHOTO: Ben Wallace Drives A Car From The Future, Calls It A 'T-Rex'

NBA players are expected to drive pretty cool cars, and Ben Wallace ended this past season as an NBA player, so it probably shouldn't be all that surprising that he drives a pretty cool car.

Averages Joes typically don't get to see the coolest NBA cars, but Wallace -- a longtime center for the Detroit Pistons -- had his vehicle (I'm not sure it can be called a "car") in the same shop as SB Nation blogger Evan Dunlap on Monday morning.

Dunlap, being the enterprising guy he is, was able to snap a picture of the vehicle.

As promised, here's Ben Wallace's car, the T-Rex, which was in the same shop as mine today.twitpic.com/9notjw 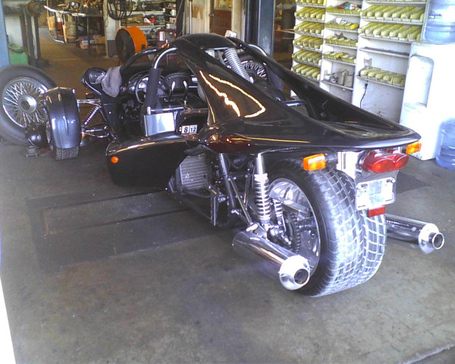 It's kind of like a motorcycle crossed with a car crossed with something that would seemingly be difficult for Wallace and his 'fro to fit into, but it does look pretty cool, doesn't it?