The Indiana Pacers' general manager called his team "soft" after a blowout loss to the Miami Heat in Game 5, but that's not the real problem with this squad.

Share All sharing options for: Pacers' Issue Is Guard Play, Not Soft Play

The Indiana Pacers are a nice young team with a fatal flaw that -- barring an unlikely comeback -- is going to prevent them from advancing to the Eastern Conference Finals this year. If you ask general manager Larry Bird what that fatal flaw is, he'll say something along the lines of what he said after the Pacers' Game 5 blowout loss to the Miami Heat on Tuesday night.

"Soft" is such a vague term that it really could apply to anything. Was Bird talking specifically about his team's lack of a response to hard fouls by Udonis Haslem and Dexter Pittman? Was he suggesting that his club talked too much after Game 4, then didn't back it up? Or ... was he saying that his team dealt with the Heat's defensive pressure poorly and failed to get good shots?

It's probably a combination of all three of these things. However, if Bird was specifically talking about his team's on-court play, this is where that fatal flaw comes into play. To Bird's credit, he's built a team that has loads of young talent, plays well together, defends tenaciously, has plenty of cap room and is only one move away from being truly elite. He has plenty of means to improve the roster.

But his roster lacks one very important element: good guard play. Against good teams like the Heat, this just kills the Pacers.

In another era, you could get away with a three-guard rotation of George Hill, Darren Collison and Leandro Barbosa. None of those guys are bad players, and in 1992, they would do a passable enough job of bringing the ball up the court and dumping it in to the big men.

But this is 2012. In the era of hybrid zone defense, teams need guards that are threats to score themselves and excel at seeing the pass before it's actually there. The Pacers' three guards are often threats, and sometimes they even make decent passes, but they're never able to do both at the same time. Hill's a useful combo guard that has been forced into being the team's primary ball-handler in an era dominated by point guards. Collison was tabbed the teams' point guard of the future but has played well only once his role was limited to being a sixth man. Barbosa is a shot of instant offense, but he's not the kind of player a team can rely upon for too long because he's such a poor passer.

Any one of these guys would make great third guards. In fact, Hill and Barbosa have been great third guards for two title contenders. But as lead guards, they fall way short. When the Pacers have played good teams this year, that's been proven over and over again.

Take the stretch at the end of the second quarter in Tuesday's loss. The Pacers, despite being blitzed by an early Heat surge, had crawled their way back to within three points with just over five minutes remaining in the first half. What followed was a string of possessions in which the game was lost. The Pacers' big men didn't get touches, and the guards didn't get into the lane at all. Before the Pacers knew it, they were down by nine. Here's what happened on each of them.

5:08 - The Pacers try a play to get Danny Granger a look, running him off a baseline screen set by Roy Hibbert. Granger catches the ball and runs a pick and pop for Hibbert. Hibbert catches the ball on the right elbow, but the spacing is off and he's forced to give it back to Dahntay Jones, in the game for an ineffective Paul George. Jones catches the ball and misses a chance to give it back to Hibbert in the post with the shot clock running down. A better passer would have found a way. Jones instead fires up a contested mid-range shot that misses, and Udonis Haslem scores on the other end. Heat 40, Pacers 35. 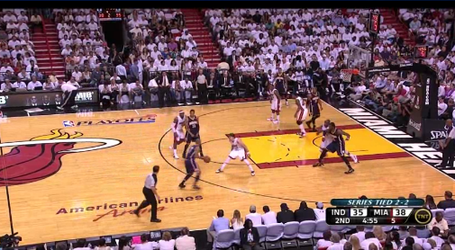 4:33 - The Pacers run a pick and roll involving Hill and Hibbert, and Hibbert is open at the foul line for a second. A smart passer would have disguised his intentions to freeze the weakside defenders and made the pocket bounce pass. Hill instead holds onto the ball. 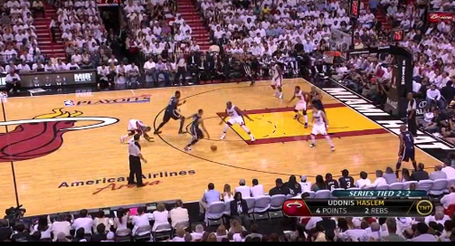 Hill then throws a poor pass to Granger popping out on the left side that gets deflected, ruining the second option. Granger eventually gets trapped and is forced to give the ball to Hibbert 28 feet from the basket. Somehow, Hibbert's three goes in, but that was a lucky break. Heat 40, Pacers 38.

3:38 - Hill and David West run a pick and pop that is well covered by the Heat. The ball eventually gets back to Hill, and he tries to make a play going left. The Heat ultimately swallow him up with a hard trap, preventing him from turning the corner. As Joel Anthony rotates back to his man, Hill flings a contested three that comes nowhere close to going in. The Heat cash in with an Anthony free throw on the other end. Heat 41, Pacers 38.

3:17 - This is the possession that still makes the least sense to me. Down three, the Pacers put Barbosa back in the game and immediately run a clearout for him. I don't know if coach Frank Vogel called the play or if Hill did, but whoever designed this possession got it very wrong. As you can see here, the Heat basically zone up because they know Barbosa isn't a threat to find a teammate with a pass. 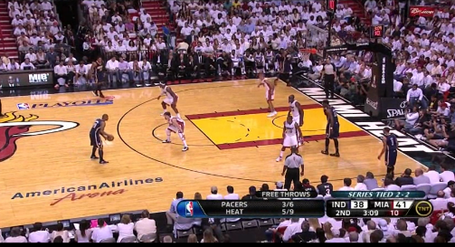 Barbosa dribbles around for a while, sees no openings and eventually passes to Granger, who takes a contested three with the shot clock running down. LeBron James steps on Granger's foot, and Granger goes out of the game. This is the moment where many feel the game changed, but as you can see, it's not like the Pacers were generating good looks with Granger in the game. Luckily for the Pacers, Mike Miller misses a wide open three as Granger lays on the floor. Heat 41, Pacers 38.

2:41 - The Pacers' goal on this play is to get the ball to Barbosa on the right wing and then enter it to West in the post with Battier on him. The problem? Hill telegraphs his pass to Barbosa, and Shane Battier jumps into the passing lane to prevent the pass from being completed. 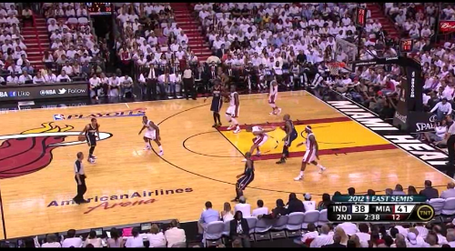 Hill stared at the right wing for at least two seconds, so it was easy for Battier to anticipate where the ball was going. A good point guard doesn't do this. Option two on the play is a pick and pop involving Dahntay Jones (in for Granger) and Hibbert on the left side, but despite Hibbert being open, Jones can't find a way to complete the pass. He eventually swings it crosscourt to Barbosa for a 28-footer that gets nowhere close. James eventually hits a three on the other end. Heat 44, Pacers 38.

1:46 - Hill and Hibbert execute a solid pick and roll and Hibbert catches the ball at the free-throw line. He then swings the ball to Jones in the corner, but instead of shooting the three, Jones drives to the middle, gets caught and has his crosscourt pass deflected out of bounds with seven on the shot clock. On the ensuing out of bounds play, coach Frank Vogel draws up a play for Hill to pop open for a three on the right wing, but Barbosa ignores him to try going one-on-on against James. This obviously fails. Heat 44, Pacers 38.

1:10 - Hill eventually kisses a floater off the glass, but even here, he misses a chance to throw a lob pass to West being guarded on a switch by Mario Chalmers. I'm sounding like a broken record, but a good point guard makes this pass. Heat 45, Pacers 40. 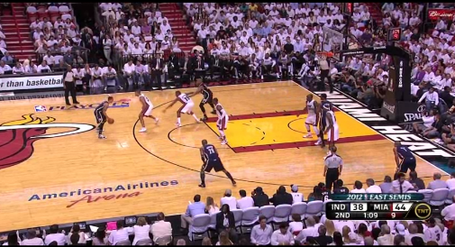 35 sec: Hill and West run a pick and pop, Hill gets West the ball an instant late, West is trapped, no guards cut to the ball and James gets a dunk on the other end. Heat 47, Pacers 40.

18 sec: This is a end-of-clock situation by design, so Hill dribbles out about 12 seconds before running a pick and roll with West. He eventually gets a semi-open look for three, but if he was faster and more alert, he could have easily drove the ball to the basket. Take a look at this screenshot. 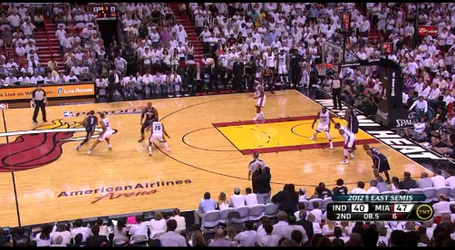 Granted, West doesn't help Hill out much by whiffing on the screen on Chalmers, but if Hill notices that a beat sooner, it doesn't matter. He eventually misses a three and the Heat get a layup at the buzzer for a nine-point halftime lead. Heat 49, Pacers 40.

This is why this summer is a critical one for Bird's team. Thanks to Bird's work, Indiana is expected to be well under the salary cap this summer. Priority number one is re-signing Hibbert, but priority number two has to be finding a guard that can make plays. Perhaps that guy is Eric Gordon, an Indiana native that is arguably the top restricted free agent on the market. Perhaps it's a point guard like Jeremy Lin, Goran Dragic or even Steve Nash.

No matter what, though, Bird needs to find a way to get an elite guard on this team. Until then, the Pacers are stuck in the middle of the Eastern Conference pecking order.