Share All sharing options for: Photo: Celtics, 76ers Have Some Game 7 History

The second round playoff series between the Boston Celtics and Philadelphia 76ers has been unquestionably ugly through the first six games, with two stellar defensive teams waging total war against the ideals of aesthetically pleasing basketball. While this series has been hard to watch, the games have been close and a Game 7 this late into the playoffs is always something to cherish.

Before we tip-off on Saturday night, here's a quick reminder of the playoff history these two franchises have. They are no strangers to playing a Game 7. 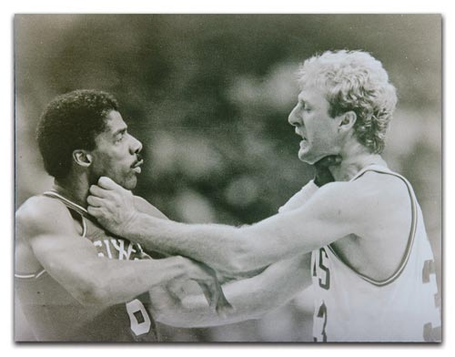 Yep, that would be Julius Erving and Larry Bird at each others throats in the '80s. These teams pushed playoff series to a seventh game in both 1981 and 1982, with Boston winning the former and Philly winning the latter.

If that photo is any indication, tonight should be fun.

For all news and information regarding the Philadelphia 76ers, please visit Liberty Ballers or head on over to SB Nation Philadelphia. For updates and perspective on the Boston Celtics, check out Celtics Blog or stop by SB Nation Boston.