7 Important Questions About The Heat Vs. Celtics Series

It's the Heat and Celtics, playing in a key playoff series again. What are the keys to either team coming away with the victory?

Share All sharing options for: 7 Important Questions About The Heat Vs. Celtics Series

You can throw out the regular season results when evaluating the Eastern Conference Finals between the Miami Heat and the Boston Celtics. There isn't a ton from any of the four matchups that was instructive.

The Celtics won three of four, but these are different Celtics and different Heat teams than they were then. Norris Cole went off in the first game; he's barely a rotation player now. Avery Bradley was critical in both Celtics wins in mid-April; he's injured now. Chris Bosh is also hurt, and that has changed the Heat.

Defining a bunch of keys to this series is therefore tricky. That said, here's our best attempt.

1. How do the Celtics compensate for Bradley's absence?

The loss of Bradley is critical, especially against the Heat, for a number of reasons. We'll start with the more subtle one and move to the most obvious one next.

The Celtics are really going to miss Bradley offensively this series. While Bradley isn't a great scorer off the dribble, he has become arguably the league's best cutter along the baseline. In this way, he makes himself a threat off the ball even though he doesn't really do much more than shoot corner three-pointers and layups.

This skill is especially valuable against the Heat because of the amount of defensive attention Miami's defenders pay to the ball. Like many teams, the Heat trap pick and rolls and essentially play a three-man zone on the other four guys. Their defensive rotations are so quick that they usually can recover when the ball is rotated, but teams with elite ball movement can make Miami pay for their strategy. Elite ball movement comes from great player movement and cutting, and Bradley was at the center of that effort.

Most notably, Bradley was the key to the Celtics' blowout win over Miami on April 1. The Heat were trying out a slightly different defensive strategy that they likely were trying to test before the playoffs, and Bradley made them pay with beautiful baseline cuts like these. 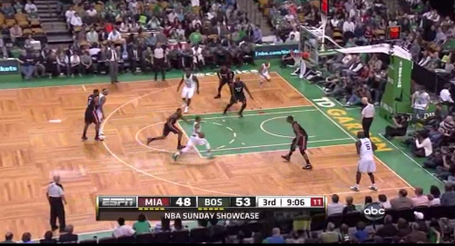 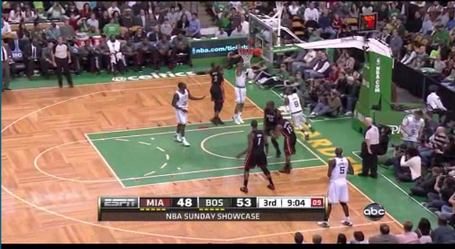 Now, that element is gone, and the Heat can load up on the ball without having to worry as much about a player like Bradley on the weakside sliding into open space. That loss can't be downplayed.

2. How the heck is Boston supposed to guard Dwyane Wade?

Here's the other, more obvious effect of Bradley's absence. Check out how well Bradley has guarded Wade in the four games this year.

Wade's averaging over seven fewer points per 36 minutes with Bradley in the game, is shooting 21 percentage points lower from the field and has a double-digit swing in plus/minus. Those are significant differences.

Without Bradley, the Celtics may be in trouble. Ray Allen has guarded Wade decently in the past, but he also had two healthy ankles. Mickael Pietrus is another option, but he's foul-prone, and he also needs to occasionally give Paul Pierce a rest on LeBron James. Rajon Rondo could slide over, but he's guarded shooting guards very, very rarely this year.

Obviously, it's going to take a team effort to stop Wade. But without Bradley, the Celtics' help defenders will probably have to do too much.

3. Without Bosh, how does Miami prevent Kevin Garnett from roaming?

Of course, as Celtics fans will surely retort, the Heat have a pretty significant absence of their own, at least for the start of the series. Devoting two questions to Bradley and only one to Bosh is more because the Heat's issue without Bosh is a bit simpler than the Celtics' without Bradley. As I noted when Bosh first went down:

Worse, Miami's game-plan to attack Indiana directly involved Bosh. Indiana's one of the league's strongest defenses, but teams can attack them by taking advantage of Roy Hibbert's lack of mobility defending pick and roll. Using Bosh, a major threat popping out for open jumpers, would have exploited that weakness. Now, Hibbert can contain the ball-handler without having to worry to scurry back to cover Bosh.

The Heat managed to figure out the Hibbert puzzle in the previous series by attacking him in pick and roll anyway, taking advantage of the Pacers' strategy of letting him hang back. That's not going to work against the Celtics, though. The Celtics' big men are much quicker, and they simply won't give James and Wade the kind of space Hibbert and David West did. That's where Bosh's absence as a threat is going to be felt most.

In particular, the Heat are going to have a hard time minimizing Kevin Garnett's defensive impact. Somehow, Garnett's become underrated defensively, even though everyone believes he was once the league's best pick and roll defender. Not only is he great in pick and roll situations, but he's become an elite defensive anchor, capable of roaming off his man to shut off driving lanes.

The 76ers tried to minimize his pick and roll defense by using Brandon Bass's man to set the screen, and even that didn't work that well, despite the fact that the 76ers were able to put two offensive-minded big men on the floor at the same time. The Heat can't match that unless they play Shane Battier and Udonis Haslem together.

If Garnett's legs can hold up -- and so far, they have done so beautifully -- the Heat will really start to miss Bosh.

4. Can the Celtics continue to score so efficiently on inefficient shots?

The Celtics shot the ball incredibly well in the three meaningful games against the Heat this year (both teams rested their starters for the final game). In particular, the Celtics scorched the nets from 16-23 feet, nailing 33 of their 64 attempts (52 percent). In their 115-107 win in Miami on April 10, the Celtics went 17-29 from 16-23 feet, and only nine of those shots were assisted.

Now, granted, the Celtics have proficient mid-range shooters. For the season, the Celtics shot 41.5 percent from that range, good for third in the league. But 41.5 percent is a major step down from 52 percent, and while the Celtics did get plenty of open looks, they also hit a number of shots that the Heat will happily let them shoot. Rajon Rondo, for example, was 4-6 from 16-23 feet in that April 10 game, and I'm sure Miami is fine with Rondo taking six shots from that range.

For more evidence, consider the Celtics' mid-range shooting against the 76ers, a team that happily gave up those shots throughout their seven-game series. Overall, during the series, the Celtics shot just over 39 percent from 16-23 feet, and only twice did they get to 10 made shots from that range. Many felt the 76ers were too cavalier in surrendering open mid-range shots ... and the Celtics still didn't make them pay anywhere close to the degree they made the Heat pay.

While I expect the Celtics to shoot better than 39 percent from this range, expecting them to hit over 50 percent is probably expecting too much. There will be a regression to the mean.

5. Which poor bench steps up?

Both teams' benches have been much maligned during the season, so whichever one plays better will probably determine the series. Here, I'd lean toward Miami, who can at least put some three-point shooters on the floor to provide Wade and James more room. The Celtics' bench, on the other hand, has only one deep shooter, Mickael Pietrus. Whenever they've played too many bench guys at once, their offense has broken down. That'll be especially true against a Heat defense that aggressively defends the ball at the expense of the weakside.

6. Do the Heat have any shot at limiting Rajon Rondo?

The Celtics' one major advantage over the Heat historically is Rajon Rondo, and that continues to hold true. Rondo was outstanding in both of the Celtics' wins over the Heat in early April, posting a triple double on April 1 and dropping 18 points and 15 assists on April 10. The Heat really haven't figured out an answer for him thus far, though they actually defended him differently in the two games.

In the April 1 game, for example, they decided to trap Rondo more aggressively on pick and rolls. Rondo proved to be too quick for these traps, though, and got into the lane at will. 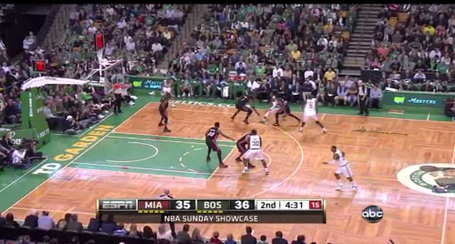 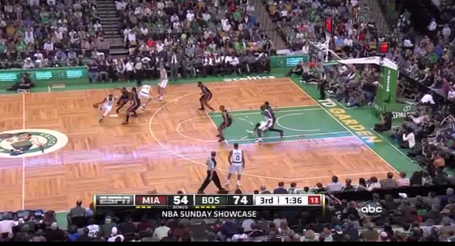 In response, the Heat decided to revert back to the "six feet off" defense for the April 10 matchup, in which they laid off Rondo, daring him to shoot. Problem was, that didn't work either, because it gave Rondo plenty of room to see the passing lanes. 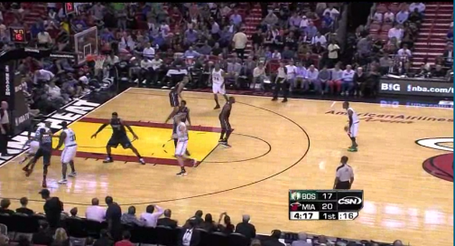 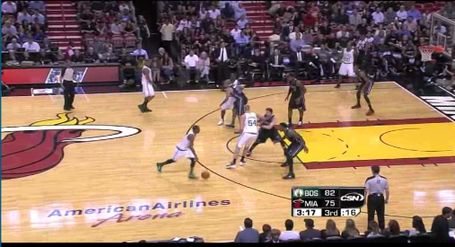 So what is Miami to do, exactly? If it were up to me, I'd revert back to the defense they played in the April 1 game. One of the reasons the Celtics were able to beat Miami's tough pick and roll traps is the action of Bradley on the weakside, as noted above. Without Bradley, that element of the Celtics' offense is gone. The 76ers had some success with soft traps on Rondo, and I suspect the Heat will try to do the same.

No matter what, the Celtics need Rondo to be fully engaged in all games to have a chance. He can't submit any games like Game 6 against the 76ers, because he is Boston's one major advantage.

7. How much will LeBron James be used as a roll man in pick and rolls?

One thing we haven't seen much from the Heat this year is LeBron James as the screener in a pick and roll. MySynergySports.com only lists 22 plays in which James shot as the roll man on a pick and roll this year, which is surprising because he can be so hard to stop with a head of steam. But with Bosh injured, the Heat started to use James in this matter more often, and it proved to be successful.

Here are two examples from the final three games of the Pacers series.

The Heat presumably didn't run this play much because they didn't want to give the Celtics, or any other opponent, a means to scout it. But with Bosh out and the Heat needing to find a way to occupy Garnett more, I'd expect and hope to see James used in this matter more often.

PREDICTION: The Celtics will not make any game easy for the Heat, but they're just too banged up to score enough to win the series. These five games will all be close, but without Bradley, the Celtics just won't have enough to stop both Wade and James. Heat in 5.