Down three points with 48 seconds left in Game 2 of the Eastern Conference finals against the Miami Heat, the Boston Celtics somehow were able to get a wide-open 3-pointer for Ray Allen. How'd it happen? Let's take a look.

First of all, you have to admire the Celtics' incredible composure on this play. The initial design had Ray Allen coming off a baseline screen, but LeBron James did a great job of fighting through the Kevin Garnett screen to cut off the pass to Allen. That meant that the Celtics needed to freelance to create a look. Rajon Rondo did this by running a pick-and-pop with Garnett, and then all hell broke loose.

The Heat defender most responsible for the open look is Dwyane Wade. As you can see here, he broke to try to pick off Rondo's pass to Garnett, but left far too late, leaving the rest of the Heat defenders in a compromising position. 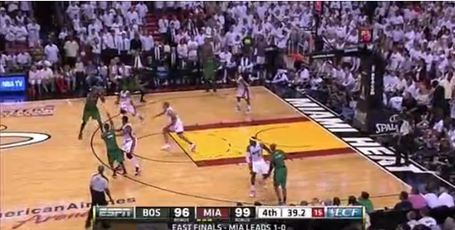 With Wade out of position, Paul Pierce made a heads-up cut down the lane to occupy defenders. This attracted James, who immediately slid over to try to prevent the layup. The problem? In the process, he left Allen wiiiide open.

So how do we assign blame? To a certain extent, James is at fault for leaving the guy who can tie the game to cover the guy who can only get it within one point. However, this never would have happened if Wade hadn't gambled for the steal, so he's the guy I'd blame the most for the breakdown. Then again, if the Celtics weren't poised and if Pierce didn't make that basket cut, Allen never would have gotten that shot anyway.

For more on these teams, visit Heat blog Peninsula is Mightier and CelticsBlog. To stay up to date on all of the happenings in the 2012 NBA playoffs, head over to SB Nation's dedicated NBA hub.