The Boston Celtics' 115-111 loss to the Miami Heat in Game 2 of the Eastern Conference Finals is going to sting, but the saving grace is that Rajon Rondo had a historically great game. The Celtics guard scored 44 points, dished out 10 assists and grabbed eight rebounds, all while playing all 53 minutes of the game. Unfortunately, it wasn't enough to lead the Celtics to victory, so it will likely be forgotten.

Well, maybe not. On ESPN, color commentator Magic Johnson called Rondo's performance the greatest playoff performance he's ever seen by a guard. That's probably an exaggeration -- Johnson obviously forgot about Michael Jordan's 63 points in Boston Garden in 1986, as well as many other performances by Jordan, Johnson himself and others.

But Rondo's feat is still very rare. Since 1985, only 10 other players have scored at least 40 points and dished 10 assists while playing at least 40 minutes in a playoff game, and only one of those 10 games was in a conference final or an NBA Finals game. None of those 10 performances featured the player playing every single minute of the game. More specifically, no player has ever scored 44 points, dished out 10 assists and grabbed eight rebounds in a playoff game since 1985.

You can also bet that few point guards had a shot chart like this. 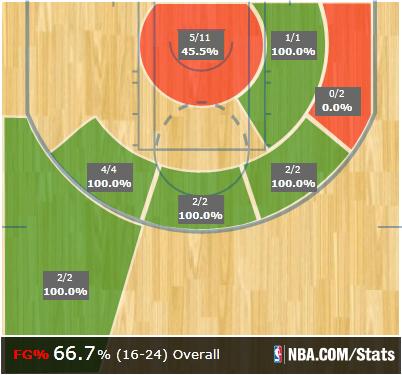 That's coming from a guy who is not known for having much of an outside shot, too. No matter the Celtics' result, this was truly an unbelievable performance from Rondo.

For more on these teams, visit Heat blog Peninsula is Mightier and CelticsBlog. To stay up to date on all of the happenings in the 2012 NBA playoffs, head over to SB Nation's dedicated NBA hub.