Share All sharing options for: Thunder's Defense Cheating Off Spurs Players In Corners

The Oklahoma City Thunder have done a much better job corralling the Spurs' devastating pick and roll attack, even with Russell Westbrook and even Kevin Durant guarding Tony Parker at times. What's working for the Thunder? Something they did near the end of Game 2: cheating off the Spurs' shooters in the corners.

Notice where James Harden is standing as Tony Parker and Tim Duncan run the pick and roll. 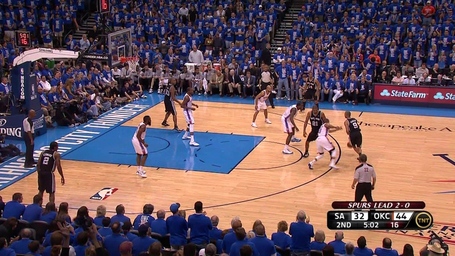 There's a risk to this strategy, because the Spurs are known to cut backdoor from the corners for layups, but it's a risk Scott Brooks seems willing to take.