Playoff Talking Points: Playing 'Buy Or Sell' With The First Round

Thanks to 40 points from Carmelo Anthony, the Knicks survived the Heat and won their first playoff game since 2001. And now the NBA has another excuse to wonder about Miami in crunch time. It's time to play "buy or sell" with the 2012 playoffs.

Share All sharing options for: Playoff Talking Points: Playing 'Buy Or Sell' With The First Round

The Knicks survived Sunday, and even though it probably means nothing in the long run, it gave New York fans a reason to get excited for the first time in a decade, and the rest of us a reason to keep the faith. The 2012 NBA Playoffs won't always be full of injury-plagued blowouts, right?

Plus, there was another suspect crunch time showing from the Heat. And isn't that what the playoffs are all about? Now that we've had a full week of playoff action to digest, let's look around the league and take stock of what we've seen. Whose stock should we be buying, and whose should we be selling in panic? Let's begin with Miami and New York.

My favorite moment from Sunday's game came after Carmelo nailed a go-ahead three in the final minute as he walked off the court. With the Garden going insane and Melo drinking it all in, J.R. Smith was yelling at him about miscommunication before the shot. As the coaching staff and team huddled on the court, Melo tried to walk past them all on his way to the bench. A minute later, he missed two free throws that could've sealed the game and broke into a sheepish grin, like a guilty eighth grader. And hey, that team won!

Maybe the Knicks will never win big with this group, and maybe this all gets blown up in the next two years, but whenever it's over, I'm going to miss this outrageous team forever. From James Dolan to Mike Woodson to Melo to Amar'e Stoudemire to Baron Davis to Jeremy Lin ... They are a broken clock and a blind squirrel brought to life as a Real World cast. And just when they're about to make you lose faith in humanity forever, they pull us all back in.

The Heat in Crunch Time — SELL

As good as Miami looks in wins, all it takes is one loss and we all go back to square one.

Who takes the last shot?

LeBron James down the stretch Sunday: hits a three to tie it after Mike Bibby put the Knicks up late, barreled to the rim for a breathtaking and-one layup (absorbing Tyson Chandler's sixth foul like it was nothing), and then, with the game on the line, he spent the final possession standing in the corner, watching Dwyane Wade like the rest of us. What? How does that make sense?

It's the same story for Miami. In close games where one or two possessions are the difference, the Heat have no clear identity on those one or two possessions. Bron and Wade can't work together in those situations, and sometimes it seems like coach Erik Spoelstra chooses one or the other by flipping a coin. Not exactly what you'd want from the clear-cut title favorites in 2012.

Nothing's exposed Carmelo more than this Heat series. Next to LeBron, the best player in the world, Anthony's not in the same universe. He's not as efficient, he doesn't defend as well, he can't get teammates involved, and a great defender (like LeBron) can take him out of rhythm way too easily. So maybe he's not elite (or whatever), but still. On Sunday he got to the rim more than he had all season, and then came through at the end.

It was a good reminder: with the game on the line and one possession, Carmelo is as deadly as anybody in the NBA. He may not be good enough to get you to the last shot situation consistently, but once he's there, Carmelo is as cold-blooded as they come.

Last year's playoffs were when the whole world realized that Harden was secretly the Oklahoma City Thunder's best point guard in crunch time. This year is when everyone's realizing he might be OKC's most valuable player. Kevin Durant may be their best player, but Harden's the piece of the OKC engine that makes everything else run smoothly. He's deadly off the dribble, he finds open shooters off pick-and-roll, and he gives OKC a bridge between Russell Westbrook and Durant that makes them just about impossible to guard.

When you look at what's made the Thunder different this season, Harden's the perfect example. Instead of Durant and two sidekicks (Westbrook and Harden), everyone's gotten better, and the Thunder now have three guys who would be the best player on the floor for 90 percent of the NBA. Harden is that good now, and so are the Thunder. It's not a coincidence. 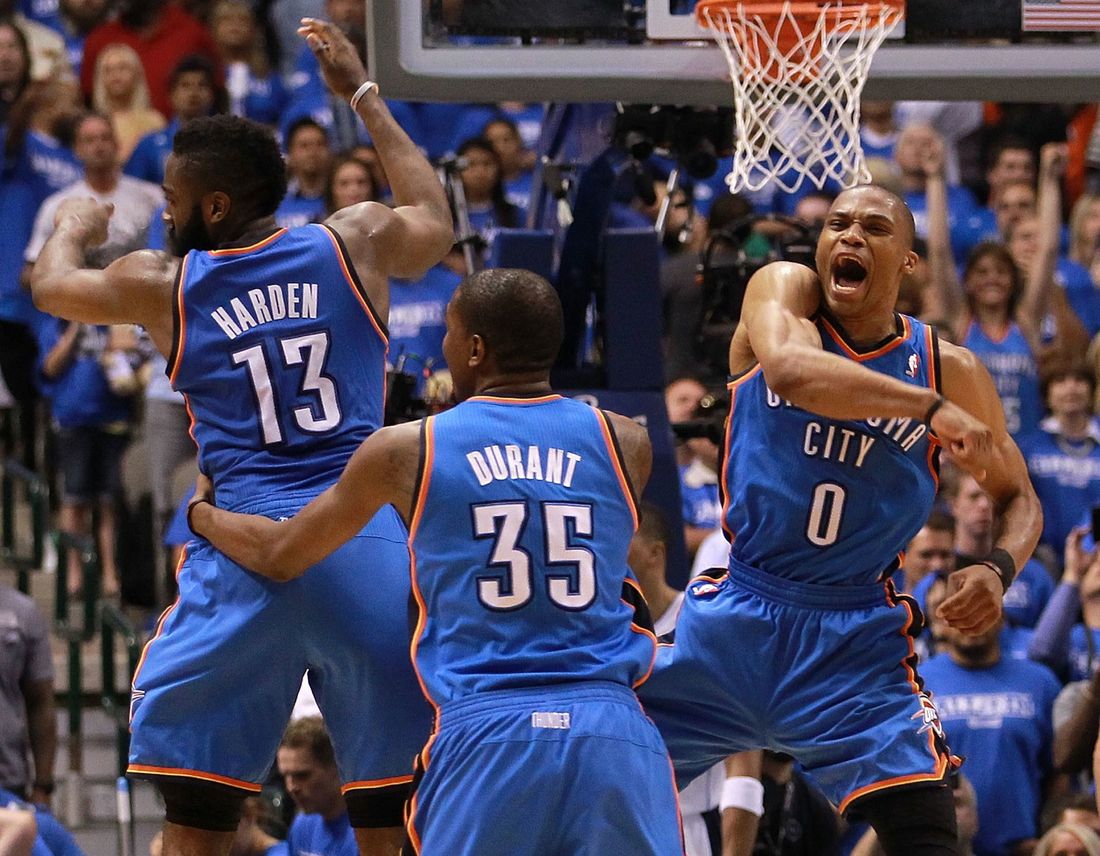 Odds are we haven't heard the last of Durant/Westbrook as Avon/Stringer, but where last year the concerns were legitimate, this year Harden's rise has made them mostly irrelevant. (And if we're keeping with the Wire theme, Harden is obviously Slim Charles, right?)

Maybe it's just this year, since Zach Randolph's still rusty and he hasn't had much time to play with the Grizzlies together as a team. Maybe it's Mike Conley. Maybe it's Rudy Gay's return disrupting the chemistry they had last year. Whatever it is, the Grizzlies have no rhythm on offense. It's like every possession is a new adventure for them. This is why we love watching the Grizzlies, and also why we won't get to watch them for much longer. If they can't score consistently on the Clippers defense, what happens when they play teams that are legitimately a lot better than they are?

As if we needed another reason to be obsessed with Chris Paul after Game 3.

If I ever kidnap Chris Paul's son, don't say you weren't warned.

If the Bulls were a stock, analysts would be hyperventilating this morning and offloading shares at an 80-percent discount. It's kind of surreal to watch them fall apart like this after they kept it together for so long through Rose's regular season injuries, but yeah.

The month of May has not been kind to the Bulls. On the other hand ...

Spencer Hawes And The Sixers — BUY

The Sixers backed their way into the playoffs and looked primed to stumble into a quick, painless first-round execution. But the Rose injury gave them new life. Suddenly everybody's clicking again, and the Sixers look a lot like the team that had the Eastern Conference buzzing two months ago.

Speaking of which, can we have a round of applause for Spencer Hawes? After putting up 21 points and nine rebounds on Friday, he put in another 22 and 8 on Sunday, including a three at the end of the first half and 9-11 shooting on the afternoon. Nobody's saying he's the next Hakeem, but for a lottery pick the NBA had forgotten about as recently as a few weeks ago, The GOP's MVP is coming through at just about the perfect time against one of the best defenses in basketball. (The only way this could be better is if he brings this mustache back.)

Kobe and the Lakers — BUY? MAYBE?

From Yahoo! Sports and Marc Spears:

"[Steve Blake and Ramon Sessions] have tough shoes to fill because Fish has so much experience," Bryant said after the Lakers took a 3-1 lead in the first-round series. "But you have to start somewhere. Fish and I started somewhere. We were playing at a time with [Ron] Harper who had three championships and we had to learn from him.

"But we had to start somewhere. This is the beginning for them."

After Blake's shot slid through the net, Bryant embraced him.

"It always feels good to get a hug from Kobe," Blake said.

Just for the record: I don't care what Steve Blake says, a hug from Kobe would be a complete mind f---. If Kobe hugged me, my first thought would be, "What is this? Emotion? Is this a trick? Is he trying to kill me?"

Also for the record: the Sessions/Blake combo worked against Denver Sunday night, but it's still kind of scary that the Lakers title hopes may hinge on the performance of Steve Blake and Ramon Sessions. Buy that formula at your own risk, I guess. We'll revisit this 10 days from now.

In a perfect world, Rajon Rondo and Chris Paul would have a game of one-on-one to the death to settle the "best point guard" debate, and Pierce could sink foul-line extended turnarounds for the rest of eternity. Instead, we'll have to settle for the Celtics making one more run at a title. Rondo's been unbelievable so far, Kevin Garnett is saying crazy Kevin Garnett things, and Pierce has found the fountain of youth an old man's game that never seems to age. With Rondo healthy and Chicago not, it's hard not to dream about a Miami-Boston series in two weeks.

The NBA Playoffs So Far -- HOLD

The only thing worse than a playoff season full of blowouts is a playoff season full of injuries and blowouts. So yes, the first ten days have been a little brutal. On the other hand, the Grizzlies and Clippers give us plenty of hope, and past that, the West becomes a war zone next round. As for the East? It's a weak field, but if it comes down to the Celtics and Heat, that field might give way to one of the more fascinating Conference Finals matchups we've seen in years.

So no, I'm not giving up on the NBA Playoffs just yet.

What about you? Are you buying what the playoffs have been selling? Do you trust the Heat and Celtics? What about the Clippers or Lakers? Let us know below. Playoff Talking Points is a regular series keeping tabs on some of the biggest stories from the NBA Playoffs.