Share All sharing options for: Kobe Bryant And Sportswriting 101

OK, so this has nothing to do with the Lakers' loss in Game 5 Tuesday night. It actually goes back to Friday, after the Lakers lost to the Nuggets in Game 3, and involves J.A. Adande on Around The Horn and Bill Plaschke calling Kobe an asshole. In a loving way, though.

It started when Andrew Bynum told reporters, "Maybe I just wasn't ready to play. I got there a little late, I didn't have as much time as I needed." A player not ready to play in the playoffs? This (obviously) set off all kinds of alarms with the media. So naturally, they asked Kobe about it.

This clip surfaced Tuesday and it's fantastic.

We'll write this out just for fun.

Reporter: "How do you think he was handling the frustration later in the game of the way he played or didn't play in the first half, and as things kind of, in the fourth quarter it seems like, you know it seems like, things weren't breaking for him?"

Reporter: "Well how do you think he handled the frustration?"

Kobe: "Well he's a competitive guy. ... They missed a goaltending call, which they did miss, and they said so after the fact. So he kinda lost it there for a second, and went crazy. ... But I felt like he played with the intensity we want him to play with in the second half."

Reporter: "Does that say something, though? You guys scored on that possession, anyway, but he's still frustrated enough that he's not letting it go?"

Kobe: "What are you writing, a temper tantrum column Andrew Bynum thing? I mean, look, everybody has moments where they blow up like that. He didn't cost us anything, he didn't get a technical foul ..."

And here we pause to marvel at Kobe's "Your Column Is Shitty" face. 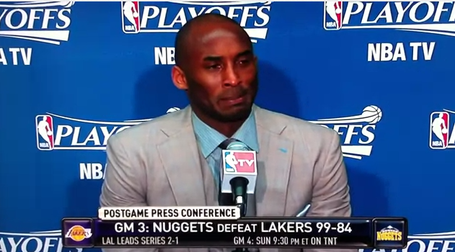 That last part, about Danilo Gallinari... That's an inside joke with the press room, and explained by J.A. Adande here, where he tells us that Bill Plaschke called Kobe an "asshole" after the press conference above. Adande's story is pretty good, but you know what's better?

"He played with the intensity we want him to play with in the second half."

He's doing it again. He's acting like a 24-year-old toddler.

"What are you writing, a temper tantrum column?"

If he can't be ready now, then when?

I repeated the quotes to Kobe Bryant, who smiled in that sinister way he smiles and said, "Hopefully you guys will stick it to him good enough where it sinks in for him."

"I mean I don't really understand what the big deal is."

... Bynum's 18-point, seven-rebound second half, which should only make Lakers fans angrier. If he had put forth that effort the entire evening, the Lakers would be entering today's game preparing for a pleasant sweep instead of readying for more desperate chaos.

In conclusion, Kobe is (still) the undisputed Press Conference M.V.P., and if it's "desperate chaos" you want. ... Look no further than sportswriters' piecing together a column about Andrew Bynum.