'The Full Nelson' Gets Wined And Dined By Clyde Frazier

Amy K. Nelson sits down with Knicks legend and Hall of Fame guard Walt "Clyde" Frazier in his New York City restaurant to talk basketball, retirement and his inimitable style.

Share All sharing options for: 'The Full Nelson' Gets Wined And Dined By Clyde Frazier

NEW YORK -- When I was presented with going to Walt "Clyde" Frazier's new restaurant on Manhattan's west side for a Full Nelson episode, I didn't want to pass it up. As a resident of this city for nearly the past 10 years, I've long admired Frazier and own language as the Knicks' broadcaster, but also for his individuality.

Maybe it's because I went to a film school for college, a school with no grades where being different was not only cherished, it was expected. Maybe not. But I love people who are confident in who they are, who make no apologies for that. It's hard to make a mark in this city, and Frazier, 30 years after he starred for the Knicks, is still one of the most recognizable people associated with the team. He calls himself the greatest Knick of all time, and at 67, he genuinely still loves being recognized, interacting with people and being a part of the fabric of its diverse population. Many of my friends were born and raised in this city and they love the man, truly. He is revered here. 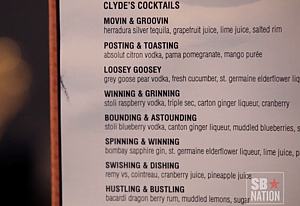 I spent over three hours at Clyde's Wine and Dine and honestly, didn't want to leave. Not only are the drinks and food very good, but the ceiling alone is worth the visit. And chances are if you go by his restaurant, Frazier will be there. He is not an absentee owner; especially once the season ends, he plans on being there most days of the week. This is a venture he deeply cares about, and being there last week, you can tell. People walking in off the street were amazed, mouths agape, when they saw him live, in the flesh, greetin' them with his familiar cadence. He posed for pictures, shook hands and interacted with anyone who dropped by.

Frazier told me he's considering getting a Rolls Royce (he sold his cherished one a few years ago), parking it outside the Madison Square Garden, hiring a few attractive women and passing out flyers for his new restaurant. He beams when talking about the idea; he knows it will be a hit. And he's right, what could be better than that?

After spending the afternoon with Frazier, I left feeling he's a man of character, charm, depth. I can't wait to go back and swish 'n' dish more with the legend.