Bad Sports Rhetoric isn't just inherited. It's taught and practiced at some of the most popular factories of sports rhetoric, and honed as a craft by the masters who wield its tools with perfection.

1. Enclose all unsupported statements in EMOTIONAL TAUTOLOGY, i.e. "That thing you said is true, but I maintain my stance in the face of all data because I still believe it, and thus reassert it while dismissing your argument that I just made up here on the spot."

EMOTIONAL TAUTOLOGY allows you to dismiss any argument with an emotional dismissal and reassertion of the original proposition. 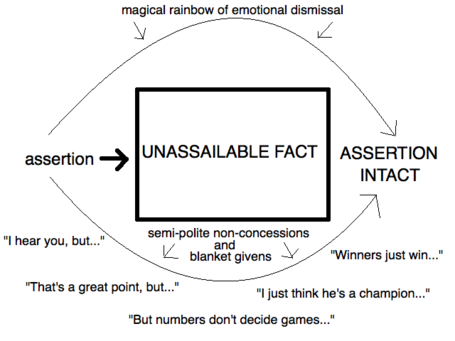 The basic logical pattern is the most common in any sports discussion, and is flexible and compatible with every other possible bad sports rhetoric device.

"LeBron James has gotten this far, but he lacks the killer instinct to get the Heat to a win in the NBA Finals."

"LeBron James has gotten two different teams to the NBA Finals in his eight years as a professional, often with little in the way of a supporting cast. He is the best basketbal player in his league, and perhaps in the world. James has averaged over 30 points a night with dazzling consistency in these playoffs, and singlehandedly took over games six and seven against Boston. Michael Jordan lost three straight playoff series to the Detroit PIstons before winning three straight NBA championships. You are fabricating a judgment of a man's basic character based on watching him play a team game on the television. This is dumb."

An effective way to assume anything, counter by dismissing any points to the contrary, and then simply reassert your original point as your response. The thing I have said remains true, and will prevail in the face of all evidence. Crucial to this argument: simply assert something, then repeat.

"I respect your opinion*, but in my gut** I just doubt the man in crunch time,' and other phrases like this are crucial operators here.

**The gut is the court of last appeal in bad sports rhetoric. There are no appeals after its ruling, not even reality itself. Your gut can believe things not proven real in any known universe. It also digests food. That's why you listen to it so much.

These can be used in powerful variations common throughout bad sports rhetoric.

"This loss is bitter, but especially so because it's Boston."

"The hurricane. The fire. The ermine infestation. This city deserved it more than that other city.

"I would agree with you, but I saw the look in his eyes pregame, Ted. He just doesn't want this bad enough."

"I just think Alabama will play the way Alabama always plays football, and come out on top in the end."

"The heart of the Steelers is just something you can't teach. It's what makes you a Steeler."

"He'll win the match because he's got the heart of a champion."

The most useful of all patterns, the emotional tautology may be applied in combination with any of the lesser devices listed in this volume. Most importantly, it should be used to tell the allied fanbase you are addressing precisely what they want to hear, or to tell the opposing fanbase the thing which most enrages them.

2.TEAM HELIOCENTRISM. The assumption of team A being the central issue in any event, even those completely irrelevant to the situation at hand.

"But what does Spanish loan default mean for my Royals?"

"As a Detroit Tigers fan, seeing Matt Lauer and Ann Curry bicker makes me think they could learn something the great example of the great teamwork of Lou Whitaker and Alan Trammell.

"As a Yankees fan, 9/11 and the war in Afghanistan mean more to me than to the average American."

The common non-sports example of this is the local news broadcast making things seemingly irrelevant apply to local entities.

"With the violence in Syria, we'll look at what this means for Charlotte, North Carolina next!"

3. PROCRUSTEAN NUMERALIZING. The gross misread or exaggeration of a single event or small sample size to make grandiose and inaccurate statements about the sporting world. This should ideally be done in service of TEAM HELIOCENTRISM or NARRATIVE SLAVERY. (See "TEAM HELIOCENTRISM," ibid.) 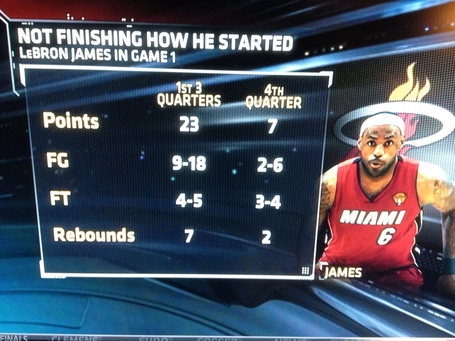 If he'd only kept going at that pace, they would have lost the game by 10.33333 points, and thus clearly LeBron's the one to blame here because he's teetering on the axis of WINNER/FRAUD, narratively speaking. See, there are numbers, and it's proven.

3. THE CLOWN-CLASS/FRAUD-WINNER AXIS. Another assertion-based argument of faith, though slightly more dependent on evidence. All athletes in Bad Sports Rhetoric may be placed in one quadrant balancing their perceived class/clown and winner/fraud percentages.

A hypothetical arrangement of players on this axis would look something like this. 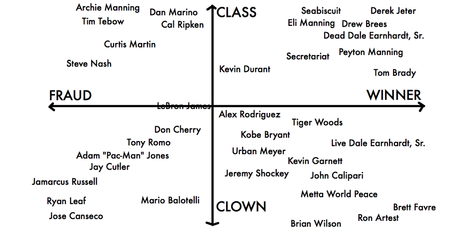 The closer a player sits to the intersection of the axes, the more controversial they will be due to transition from one quadrant to another.

4. THE IMPERIOLI PROTOCOL (AKA THE MERRILL HOGE COMPACT)

Implying the cause of a player, team, fan's, or organization's inability to win is their inherent softness, femininity, or lack of some vaguely defined masculinity.

[ANYTHING NEGATIVE MERRILL HOGE HAS EVER SAID ABOUT ANYONE]

"Until he proves his toughness, I'm gonna have to keep calling him Bosh Spice."

A graphic clarifies the brutal simplicity of the Merrill Hoge Compact. 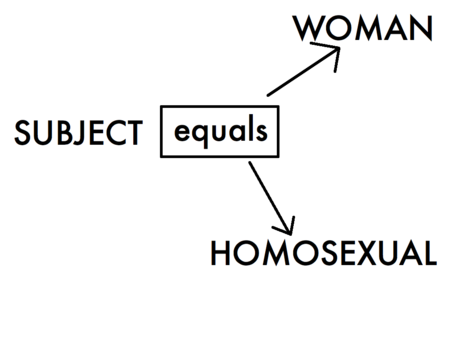 Note: when employing the Merrill Hoge Compact or Imperioli Protocol, please do not chose both options and imply that the subject -- whether "soft," "Not tough enough for the ENN-EFF-ELL," or "a finesse player, really" -- is a female homosexual. That's just confusing for everyone.