The new trends in NBA fashion have created a secondary discussion away from the court. But is there any substance to it?

Share All sharing options for: NBA Finals Fashion: Shut Up, Everyone Looks Fine

These are all inessential affectations appropriated from outdated stereotypes of nerds, and they hurt no one. Yet the NBA's "geek chic" trend has sparked a thriving discussion: it is the salvation of Carlton Banks's failed legacy; Wade doesn't understand the difficulties of myopia; pants shouldn't be brightly colored. Following the Heat's Game 5 loss at home to the Celtics, a national columnist at Yahoo! Sports held that Wade wasn't serious about basketball because the glasses he wore after the game didn't have lenses. That was likely the dumbest statement I saw all week, and I read YouTube comments. 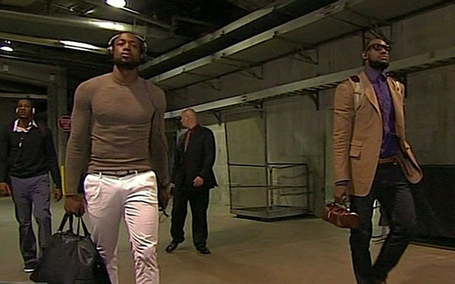 Fashion is stupid. It's a benign but ugly tumor of human evolution: we went from having adequate fur to wearing sabertooth tiger pelts to hating people for wearing a hat we don't like. We wear clothes for the simple reason that exposing our genitals in public is a crime, and sometimes because it's cold. Every detail beyond that is a function of price and opinion.

This is not a screed against fashion; I enjoy the fit of a custom-made suit just as much as the next person who could have bought something more useful. I merely want to recognize how uniquely ridiculous we are to care about clothes beyond their function and comfort, something that sportswriters have done more and more often as this NBA season -- particularly the postseason -- has progressed. 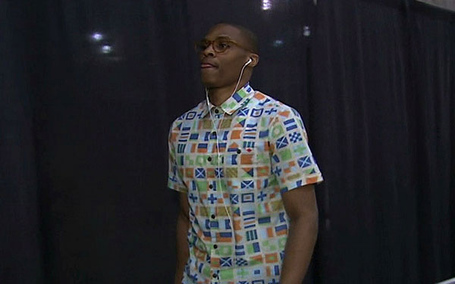 If there's anything shocking about the NBA's latest fashion trend, it's how many people -- fans and sportswriters alike -- seem completely unaware of its genesis. In October of 2005, David Stern -- eager to rehabilitate the NBA's image in the wake of the Pacers-Pistons brawl and make the NBA's black stars more palatable to both wealthy Americans and the world at large -- enacted the NBA's dress code. It took aim at hip-hop culture: jeans, t-shirts, Timberland boots, large jewelry and do-rags were all banned from players conducting any official NBA business, including sitting on the bench for games in which the players didn't suit up.

The dress code, aimed at the "street" attire of Allen Iverson and others, had ignored a cultural shift: Kanye West's rise to supremacy in the world of mainstream hip-hop (The College Dropout and Late Registration were released in '04 and '05, respectively). West's fashion choices -- he favored polo shirts to oversized white T's -- were merely the most emblematic of the changing tides of hip-hop fashion: Andre 3000 dressed like a southern dandy when West was still a producer, and Jay-Z lauded the merits of high fashion in "Change Clothes" before West recorded a full-length release. Hell, T.I. -- a man whose musical career is intertwined with his physical altercations and who spent a year in prison on federal weapons charges -- regularly wears outfits like this.

That was all between five and seven years ago. And people give a shit about Dwyane Wade's glasses?

Fashion is distinctly personal: different people can wear the same thing with different meanings. This is obvious across race and class: a cardigan and bow tie can be stereotypical for an English professor, ironic on a blogger, and chic on an NBA superstar. But it's more slippery than that. A Freakonomics podcast two weeks ago highlighted the Heat stars' different responses to wearing non-corrective glasses.

It doesn't matter that they're wearing the same thing. What they say about how they wear it fits into the larger narrative that's already written: Wade, no stranger to the front row of Paris fashion shows, is ready with the kind of media-savvy quote that has helped make him so popular, while James, who has professed his ambition to be the first billionaire athlete (he bought a share of Liverpool Football Club to "gain access to international business opportunities that go beyond the typical athlete endorsement deals"), wears only the thinnest veil over his business ambition. As Harvard economist Roland Fryer* noted in that podcast, James was essentially saying, "Look at my glasses, look at the way I'm dressed, look at the way I carry myself. I can promote your product."

*Fryer himself wears non-prescription glasses, one of an estimated 4 million Americans who do so. 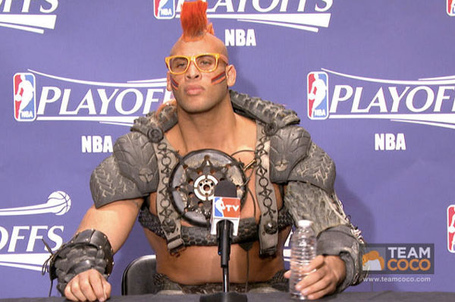 Tourists on 34th Street stared at me last week. I had rolled my slim-fit khakis most of the way up my calf to highlight my argyle socks and spit-shined dress shoes, and a lemon-yellow pocket square and ascot accented my short-sleeved green- and white-striped dress shirt. Even for New York, it was a flamboyant outfit, and the horse head mask I carried raised more questions than it answered (the getup was for a Belmont Stakes video). As someone unaccustomed to dressing like a complete ponce, I wasn't sure what to do. I felt sheepish; I worried that the normally dressed people I passed on the street thought I was a dipshit or -- worse -- someone with a show on Bravo.

In a delusional act of self-preservation, I decided that I looked fantastic. I put on sunglasses and walked confidently. It no longer mattered that I looked like a Vampire Weekend song, because I had let go of the self-consciousness that caused me to worry about strangers' opinions. Once that clicked, I stopped seeing the stares. Other people became background scenery, vague shapes that were sometimes in the way.

And that's what we are to the NBA stars creating this conversation. We can talk about who looks good, what we don't like, and what it all means until internet commenters sagely chime in with "HOW IS THIS NEWS?" Perhaps Westbrook's ugly shirts express the core of his spontaneity on the court, or LeBron's glasses ironically represent his myopia regarding his critics, or Durant's backpack is a metaphor for his humble approach to the game. It doesn't matter, because none of them gives a shit what we think. We're just background scenery on the way to an NBA title, white noise in the background of the game.