There's no need for a complicated scheme change with the Miami Heat's defense. Their defensive problems in Game 1 are far simpler.

Miami Heat coach Erik Spoelstra is likely searching endlessly to figure out an adjustment to counter the Oklahoma City Thunder's offensive blitzing of the Heat's defense in Game 1 of the 2012 NBA Finals.

Much like it has all playoffs, the Thunder's offense dominated, scoring 120 points per 100 possessions and especially dominating from the middle of the second quarter on. It's natural for Spoelstra to believe this was some sort of coaching fault and, indeed, many of the blogosphere's smartest scribes have tried to find that perfect adjustment to fix the problem.

But after re-watching the game, I have one piece of advice for Spoelstra. Instead of trying to search for a brand-new game plan, tell your players to execute the game plan better.

The Heat's defensive strategy was certainly full of gimmicks, all of which have been criticized. Instead of matching up traditionally, Spoelstra put LeBron James on center Kendrick Perkins, sliding Shane Battier to guard Kevin Durant to begin the game. The Heat first trapped Durant and Russell Westbrook hard on pick and rolls but, later on, Spoelstra instructed his players to switch screens, which meant that Durant and Westbrook were picked up by any number of Heat players as the offensive set developed. On the surface, none of it worked, as Durant and Westbrook were both outstanding in the second half.

But no scheme gimmicks are excuses for failing to adhere to basic defensive strategies.

Like, for example, stopping the ball. It didn't matter who was guarding the ball or what kind of play the Thunder were running; the Heat had major problems with this seemingly basic concept. I counted 16 times where simple dribble penetration, either by an isolation or poor pick-and-roll coverage, led to an easy shot attempt for the Thunder around the rim. Most of those 16 came when the Heat didn't switch any plays. That's not a coaching problem. That's an execution problem.

For example, while Dwyane Wade was hardly the only culprit -- where's the help? -- he shouldn't be letting Westbrook get into the lane this easily.

On this play, Wade opens up his defensive stance, ushering Westbrook to the rim. When the help comes, Westbrook has an easy pass to Perkins for the dunk.

Finally, the defensive positioning by Udonis Haslem on this pick and roll was abysmal. The hole Westbrook split as a result of Haslem's poor hedge was larger than the Grand Canyon. 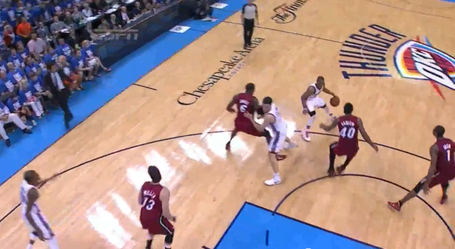 There were other mental mistakes by the Heat too, especially in the fourth quarter. Poor floor balance by Mario Chalmers led to a fast-break dunk for Durant. Later, James stood in no-man's land as the Thunder secured an offensive rebound, allowing Durant to drift wide open behind the three-point line. With under five minutes left, poor communication on a defensive switch caused Wade to lose contact with Durant for a wide-open jumper. Still later, a poor angle by the normally well-positioned Shane Battier allowed Durant to easily get to the rim from the three-point line with his right hand. Finally, on the Heat's most crucial defensive possession, with them needing a stop down seven points with a minute and a half remaining, poor help position by Chris Bosh allowed Durant to thread the needle on a bounce pass to Nick Collison for a dunk.

On the one hand, these miscues are inexcusable. On the other hand, they're also pretty easy to correct.

If you're really reaching, I suppose you could argue that Spoelstra's myriad schemes are putting too much information in the Heat players' heads, preventing them from playing as instinctively as they need to be to fix the mental breakdowns. But the Heat employed similar strategies against the Celtics and, given the Thunder's offensive versatility and the Heat's lack of size, switching like Spoelstra mandates is a sound strategy. The Heat players should be able to pull it off, because they have been able to pull it off in the past.

Now that the Thunder's explosive offense has demonstrated the importance of paying attention to every detail, the Heat players should know what must be done. It's just a matter of, you know, actually doing it.