Lesson Learned: Maybe It's The Heat Who Are All Grown Up

The Heat topped the Thunder in Game 3 of the NBA Finals on Sunday night, and on an evening where Kevin Durant and OKC showed their youth, the Heat showed their growth.

Share All sharing options for: Lesson Learned: Maybe It's The Heat Who Are All Grown Up

MIAMI -- "Every day we remind ourselves," Chris Bosh said after the Miami Heat's 91-85 Game 3 win over the Oklahoma City Thunder. "We think of that pain that we experienced last year. We carry that pain with us, we think about it every day, and that really helps us to succeed."

The Heat learned from what happened last June, and this June they're a better team. That's definitely the storybook explanation you'll hear if the Heat win two more games in the next 10 days. And I really really don't want to buy into it, but it was pretty convincing Sunday night.

Part of this was the Thunder. They came apart at the seams in the second half of Game 3, and it made Miami look that much more impressive.

It all happened in the third quarter. That was story of the game and the series so far. With Kevin Durant getting warm, the Thunder went on a 16-5 run to open up a 10-point lead midway through the third. This run felt sort of inevitable -- even as Miami's D harassed OKC throughout the first half, but the Thunder were still within one by halftime, and you knew it wouldn't last all game. So OKC opened up their lead and with everything clicking for the Thunder, the Heat had no answers. OKC just looked better.

But then Kevin Durant picked up his fourth foul. And we need to talk about Durant's fouls for a second. He's had foul trouble in the past two games, and in each case it's taken OKC out of their rhythm. A lot of the calls have been iffy, definitely, but it's not all the refs' fault. Durant gets himself caught in awkward positions on defense, and leaves himself vulnerable to someone like Joey Crawford whistling him for two or three questionable calls. For instance: Durant's fourth foul could have gone either way, but it never would have mattered if he hadn't served up a half-assed swipe at the ball on an easy LeBron layup with a minute left in the second quarter. Not only did he give LeBron an easy And-1 there, but he picked up his third foul, opening the door for an iffy foul to change the whole game in the third quarter.

So yeah, Scotty Brooks sat his superstar, and after a classic Evil Westbrook stretch (missed three, missed lay-up, charge) Russ sat down, too. After that, the team left on the floor immediately got a 4-point play from Derek Fisher, then didn't make a field goal for the rest of the quarter.

With good defense and a few breaks on offense, the Heat turned a 10-point hole into a two-point lead going into the fourth, including two different fouls on Heat three-pointers, giving Miami six easy points.

For OKC, this was ugly: Durant's dumb fouls, Westbrook's wasted possessions, and then Brooks deciding it would be a good idea to sit them both for the final five minutes of the third. If the theme from the first six weeks of the playoffs was that "the Thunder are all grown up!", then Sunday night was mostly a reminder that it doesn't all happen at once. For Westbrook, Durant, James Harden, even Scotty Brooks.

Afterward Durant said, "We had a nice little rhythm going at the offensive end [in the third quarter]. For it to just stop like that with me going out, it's kinda tough. I hate sitting on the bench, especially with fouls." What Durant's got to realize is that he's part of the problem there. "I try not to concern myself with officiating," he added. "They're gonna make their calls, there's nothing we can do about it." But that's not totally true.

Late in the fourth quarter, Durant made almost the exact same mistake he made in the second quarter -- stepping in front of LeBron, this time trying to take a charge and save two points on a fast break, and instead he picked up his fifth foul and gave up another three-point play. Those are fouls that just make no sense, and there's definitely something Durant can do about it. 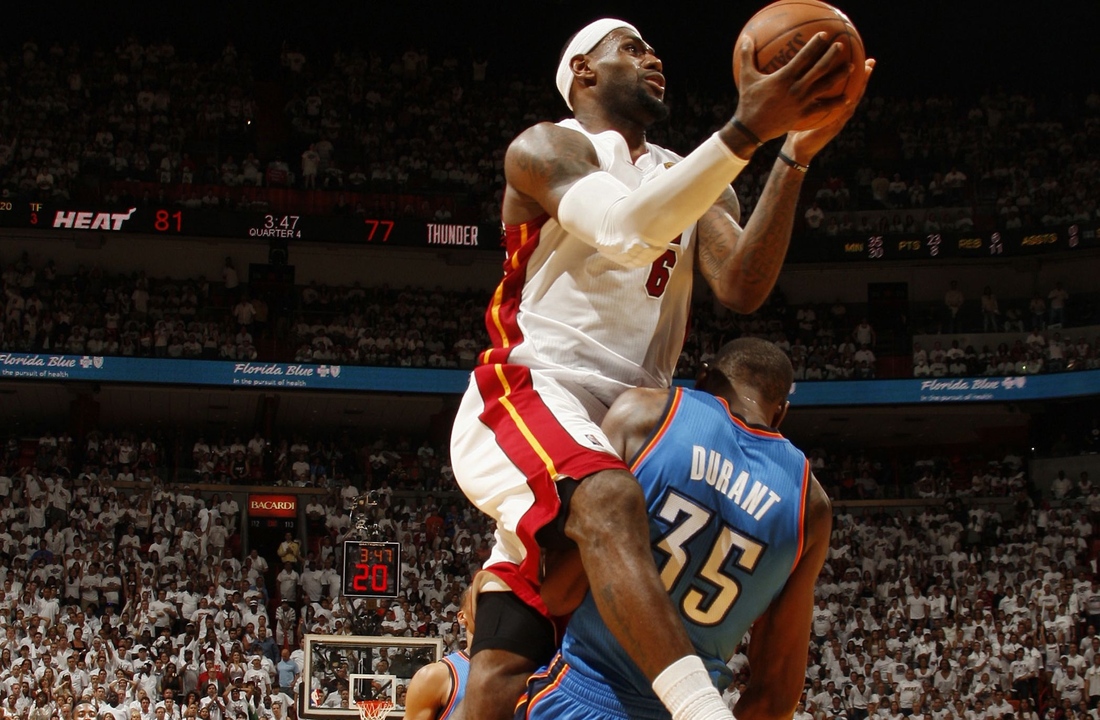 On Miami's side, it was defense and rebounding that made the difference. LeBron guarded Durant for most of the fourth quarter and repeatedly denied entry passes to KD on the wing, instead forcing him to catch it out on the perimeter. Durant's pretty much unstoppable these days, but it's little things like that go a long way toward preventing 17-point outbursts in the fourth. The Thunder scored 2 points over a 5-minute stretch in the heart of the fourth.

Meanwhile, the Heat got six offensive boards in the fourth, LeBron attacked the rim, and ... well, Dwyane Wade wasted too many possessions again, but it didn't matter. LeBron scored when they needed it, the defense held up, and Miami had just enough to win a game where neither team really played well offensively.

Watching Game 3 I couldn't help but think back to last year, when the Heat were the young team that had an up-and-down regular season and then had everything come together in the playoffs, when they bumrushed the entire Eastern Conference and looked like they'd turned a corner. Then they got to the Finals and found a Mavericks team that wasn't necessarily better, but they'd been there before, knew what it felt like to lose, and weren't taking anything for granted. By the end of that series, Dallas made the Heat look clueless.


Best sports GIFs of the week.

When it was finally over, Chris Bosh walked off the court in tears, and LeBron didn't leave his house for weeks. The "pain" that Bosh talked about Sunday was definitely real.

Who knows whether that pain actually changed the Heat as much as Bosh thinks, but Miami wasn't the team that looked clueless Sunday. Game 3 was exactly the sort of game they would've lost to the Mavericks. Instead they fought back, took the openings OKC gave them, and closed at the end.

They've been impressive all around over the past two games. LeBron's attacking in close games, Bosh is getting tough rebounds, Wade's lost a step but still has his moments, and the entire team is playing great defense. Of course, they also had a 2-1 lead on the Mavericks last June, so let's not get ahead of ourselves. There's a long way to go here.

On the other side: The Thunder have been working on an accelerated curve for a few years now -- and especially over the past six weeks -- so if anyone can bounce back, it's them. They've beaten better teams than last year's Heat did and they've come back from bigger holes than 2-1. The key is going to be evolving in real time. Where Durant plays smarter defense than he has the past two games, Westbrook plays smarter offense and Scotty Brooks puts together smarter line-ups.