Apocalypse Now: LeBron James And The Heat Are One Win Away

The Heat delivered again and again in Game 4, LeBron James is one win away from his first NBA championship, and after three straight victories, there's not much left to argue about here.

Share All sharing options for: Apocalypse Now: LeBron James And The Heat Are One Win Away

MIAMI -- There's no hell quite like trying to squeeze your way down a stadium staircase full of drunk Miami Heat fans celebrating an NBA Finals victory, alternating "Seven Nation Army" chants with "Let's Go Heat," all of them elbowing their way down the stairs and out the door, off to pop their Dwyane Wade jerseys in the Miami night and toast to the haters.

Welcome to the NBA Finals!

The Heat are one win away now, and all the apocalyptic ridiculousness that began on July 8th, 2010 is on the verge of finding a bookend two years later. That amazing celebration video is one win away from being replaced by an actual celebration video. And for the first time in two years, even when Heat fans act like Heat fans, nobody can say a damn thing.

They did everything the Thunder didn't.

In Game 4, Dwyane Wade was phenomenal as a scorer and creator in the final minutes, LeBron James contained Kevin Durant on defense for 40-plus minutes and anchored the offense with supernatural passing from the post, and guys like Chris Bosh and Mario Chalmers came up huge all game long. The Thunder were good and sometimes great for Tuesday night, but the Heat were just better.

The past three wins from Miami have been everything you could ever want from a basketball team. The Heat won playing pretty (Game 2), they won playing ugly (Game 3), and they came from behind Tuesday night to give us a back-and-forth second half that ultimately ended the same way the previous two games did -- with the Heat making every play they needed to win, and OKC sputtering away down the stretch.

Say what you want about the Heat's experience and the way it all happened the past two years, and it will go down in history as one of the weirdest, most ridiculous eras of all time. But if this team wins an NBA title in the next few days, well, nobody can say they didn't totally earn it.

Now, a few other thoughts on another outrageous Finals game.

On Tuesday I wrote a column before Game 4 that centered on Russ. It ended with this:

His reckless drives, the transition jumpers, the raw emotion ... People love it when it works and hate it when it doesn't, and he's not going to make every shot, so this roller coaster will probably go on forever. In the Finals it's all magnified. But Russ doesn't really change.

And he shouldn't change now. I don't know whether the Thunder can win this year's NBA title with him playing his game, but they definitely can't win without it.

The Thunder didn't win with him, but they wouldn't have had a chance without him. And it's a shame that Westbrook's absurd night (43 points, 7 rebounds, 5 assists) happened in a loss because, God, it was a glorious middle finger to everyone who's ever said he's holding the Thunder back.

Of course, it's Russ, so nothing's ever that easy. There will be people who blame him for his stupid foul in the final seconds, and then his turnover, but he carried the Thunder offense for practically the entire game. Especially down the stretch -- when Durant couldn't get free and everybody else on the court seemed frozen -- Russ was the only one left to make plays, and he did, over and over. Even with his mistake at the end, that was as good a Finals game as you'll see from anyone, ever.

Afterward, someone asked about the criticism he's faced in the media, and he said, "Let me get this straight, what you guys say doesn't make me happy, make me sad, doesn't do anything. It's all about my team and us winning a game. I don't have a personal challenge against you guys, and it's not me against the world. It's not the world against me. It's me and my teammates trying to win." Actually ... even in a loss, that's a pretty glorious middle finger.

OK, BUT WHAT THE HELL HAPPENED TO JAMES HARDEN?

If the Thunder lose this series, I'll remember Harden's helpless, slow-motion fast break into a bricked layup more than any other Thunder play in the series. A friend texted me and said it looks like he's had his talent stolen by the Monstars, and that's as good an explanation as anything else. Either that, or guarding LeBron James has taken so much out of him that he's got nothing left on offense.

Whatever's happening here, it's hard to watch the assassin from the Spurs series reduced to a stumbling mess 10 days later. I say we blame the Monstars.

MARIO CHALMERS AGAINST THE WORLD

The Thunder had been sagging off Chalmers for a few games now, using his man to double LeBron and/or Wade, basically daring him to make open jumpers. Watching him clank jumper after jumper after jumper was pretty painful, and then it all got worse when his teammates openly blamed him on the court. This cycle all hit a crescendo when Martin Rickman realized that he's basically Jerry from Parks and Rec.

But he kept shooting, and then Game 4 happened, 25 points happened, and he was probably the difference in Game 4. As Dwyane Wade said afterward, "No matter what, no matter how tough we are on him, he actually thinks he's the best player on this team, and that's a gift and a curse."

I kinda love Chalmers after hearing that. How can you root against Jerry Gergich in the NBA Finals? (And does this mean Jerry secretly thinks he's the best employee in the Pawnee Parks Department?)

You could put together a pretty amazing supercut of all the horrible misses Wade has had in this series. At least five times in every game, I've been amazed by how washed up he looks, and the playoffs have been one long reality check for him. But then, just when you're ready to write him off as the most overrated superstar in the NBA, he'll come up huge. He hit one huge shot in the fourth quarter, but he was also the anchor when LeBron went out with an injury, creating for everyone else and keeping the Heat afloat at the end. I think he's officially reached the point in his career where you would never want your favorite team to trade for him, but you still never, ever want to play against him. 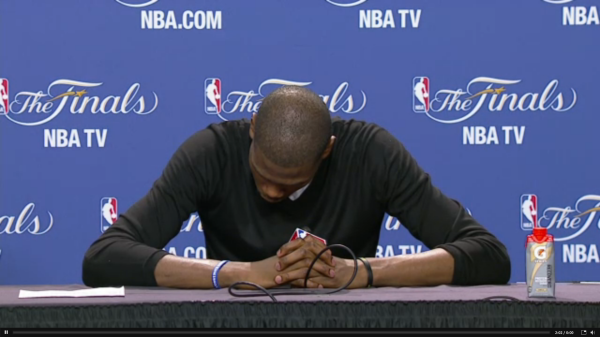 Kevin Durant is still the best, and watching him lose is just the worst.

You know who never got injured in the NBA Finals? Tim Tebow. - Skip Bayless, to a terrified hooker who just wants to go home

That image cheered me up after my stairwell adventures. Oh, and also ...

And with the game tied at 94 with three minutes left, there was the clutch three pointer to drive a stake through OKC's heart. The game was never tied again.

LeBron is where his team is, then. There's no question that he hasn't answered in these Finals, and after two long years, the debates are over. Now it's all about getting one more win.