Share All sharing options for: Durantula Unleashed: How Kevin Durant Was Freed

Back in early February, the San Antonio Spurs ran over the Oklahoma City Thunder by using the same screen and roll for Tony Parker every single time down the court. It was more than just a win; it was a message the Spurs were sending. Their execution was so crisp, so outstanding, that it didn't matter that the Thunder knew exactly what was coming. It was a total war victory, the kind of win that makes you think your team is completely invincible.

And then, Game 4 of the Western Conference Finals happened.

Most will remember Game 4 as the night Kevin Durant put the Thunder on his back. He scored 16 fourth-quarter points to lead the Thunder to the win, causing ESPN's Jon Barry, among others, to proclaim that Durant's performance one of the greatest he can ever remember post-Michael Jordan. (Barry obviously has a short memory because LeBron James scoring the last 25 Cavaliers points against the Pistons in the Eastern Conference Finals was only five years ago). And yes, Durant was phenomenal.

But what shouldn't be lost in the shuffle is that the Thunder's fourth-quarter execution to get Durant shots was unbelievable. In fact, they beat the Spurs just like the Spurs beat them back in February: by running the same play over and over again and daring the Spurs to stop it.

The play wasn't as simple as a Parker screen and roll, but it wasn't too far off. Russell Westbrook would dribble up the court, pass to James Harden on the left wing and come to the right block to set a screen for Durant. Durant then rubbed off the Westbrook screen and popped right to the foul line. The goal: get Durant the ball in the middle of the floor, where it's tough to double-team him and close enough to the hoop where one move puts him in the paint.

The play never failed. From the 6:50 mark until the game was out of reach with just over a minute left, the Thunder ran this play every single time they were in a half-court situation. Eight times, Westbrook gave the ball up and drifted over to screen for Durant (Harden did it himself once). Durant scored 13 points on these possessions, and Harden himself nailed a three-pointer on the final one when Durant was double-teamed. That's 16 points total on nine possessions in the fourth quarter of a Western Conference Finals game, all by running the same set.

This isn't to say the Thunder did exactly the same thing each time, but it was the same basic action with a couple variations. Here's how each of those nine possessions went.

6:50, fourth quarter: Westbrook's screen isn't great, but it's good enough to allow Durant to seal Kawhi Leonard off at the foul line, as if he's posting Leonard up. 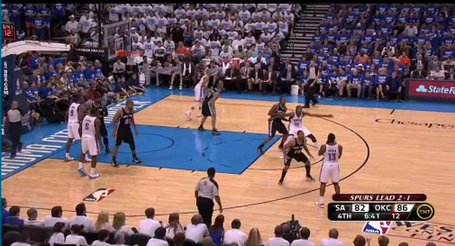 Durant eventually catches the ball at 17 feet and makes a great move on Leonard to hit a tough turnaround shot.

6:01: Westbrook once again brushes Leonard, but this time, Leonard decides to trail Durant in an attempt to push him further out on the floor. The Thunder saw it coming, though, because this time, Durant curls into the lane for an easy eight-foot shot. 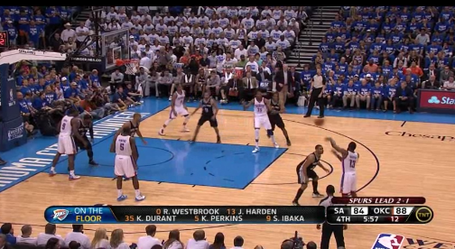 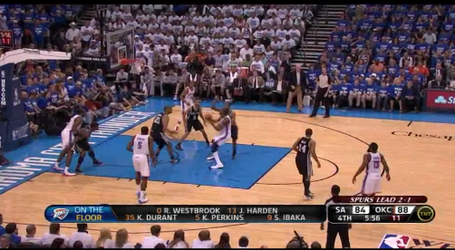 Great read by Durant and a beautiful pass to lead him by Harden.

5:15: This time, the Spurs switch the screen, leaving Tony Parker on Durant. Parker is able to push Durant out to the three-point line, but all that is by design. As soon as Harden throws the easy lob pass to Durant -- Durant has a huge size advantage on Parker, remember -- Kendrick Perkins comes over to set a back-pick on Gary Neal, guarding Harden. This frees Harden for a wide-open three that he unfortunately misses. 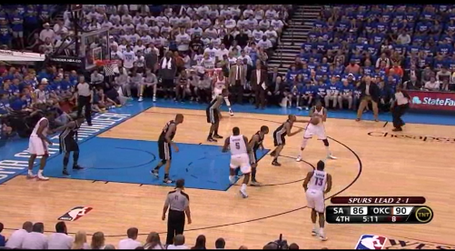 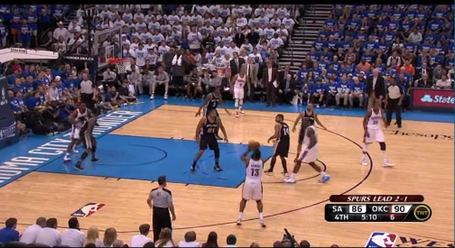 4:07: The Spurs switch again and push Durant out to the three-point line, but they're at a huge size disadvantage with Parker guarding Durant. Durant, knowing the Spurs will have trouble double-teaming in the middle of the floor, methodically backs Parker in and rises up over the top for an easy 12-footer.

3:25: The Spurs switch defensive assignments, moving Manu Ginobili over to guard Westbrook and using him as the designated switcher on the brush screen. There's a momentary lapse when Stephen Jackson, guarding Durant, initially tries to run with him on the brush screen, but he recovers well enough. Durant eventually is forced out to the three-point line again, but because Ginobili plays very little post-style defense like this, he's left very off-balanced when Durant catches the ball. Look at his positioning here. 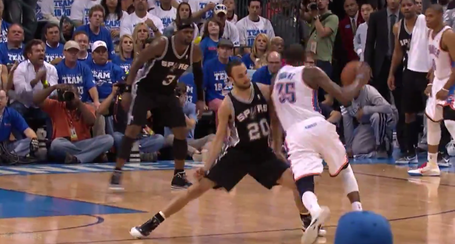 That, folks, is not a defensive stance. Durant easily gets by Ginobili and nails a floater in the lane.

2:56: This is my favorite of the bunch. The Spurs obviously don't want to switch anymore, so Jackson overplays Durant, guarding him on the top side. In the process, he forgot the fundamental rule of defense: always be between your man and the basket. Durant takes advantage by signaling Harden to throw a lob, and Harden delivers an unbelievable pass for the dunk.

2:14: The Thunder try a variation with Harden screening for Durant directly instead of Westbrook, but Jackson defends it well and forces Durant to miss a fadeaway.

1:34: For the first time in this sequence, Westbrook actually lays some serious wood on Durant's defender. This is partially by design -- a brush screen is meant to be set more to the side and act more as a diversion than a hard screen -- but the Thunder made an adjustment based on how well Jackson fought over Harden's pick on the previous possession. Because of Westbrook's screen, Durant is wide open for a 16-foot jumper. Money in the bank. 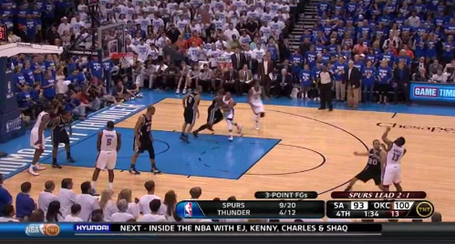 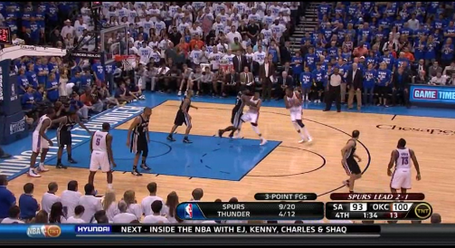 1:17: This is the evolution of Durant. Over the summer, he worked tirelessly to become a better playmaker, and it showed in a massive jump in his assist percentage. Seventeen and a half percent of the Thunder's possessions ended with a Durant assist when he was on the court this year, compared to 13.2, 13.5 and 13.5 again in the previous three seasons. On this play, Ginobili, back to covering Harden, tries to cheat off him and plug the middle. Durant recognizes it and delivers the pass to Harden for the open three. Game, set, match.

In many ways, this fourth quarter was a watershed moment for the Thunder franchise. This was Durant's moment, and he dazzled, but this was also a triumph of team play, execution and sacrifice. The Thunder have three unbelievable talents in Durant, Westbrook and Harden, but rarely have they functioned with this much synergy. Durant was the finisher, but to succeed, he needed Westbrook to provide excellent brush screens and Harden to deliver pinpoint passes that put him in the best position to score.

On the bench, Scott Brooks had to be smiling. Figuring out how to blend the talents of Westbrook, Harden and Durant isn't easy. All three are so spectacular with the ball in their hands, so the temptation to just roll with one of them and leave the other two as spectators is very high. Instead, thanks to a simple play design and pristine execution, the three stars defeated the Spurs by working together.

Eventually, Brooks will need to convince the three to do the same when it's a tight road game and the other two (in this case, Westbrook and Harden) aren't having bad shooting nights. For now, though, this feels like the start of the next stage of evolution of the Thunder. No longer are they winning with sheer firepower. Now, they're winning with execution.