Dwyane Wade and LeBron James are great players, but their on-court effort sometimes comes and goes. It came and went in Game 5, and the Heat ended up falling.

All season long, I've wondered how the Miami Heat can be so inconsistent. One moment, their defensive rotations move at the speed of light, shattering the age-old axiom that the ball moves faster than the men. One moment, their offense hums like a well-oiled machine, providing shots for their two stars in good scoring position. The next, there are moments when the opponent rains three-pointers and dunks, and the players -- in particular the stars -- act like they've paid $10 admission to watch the LeBron James/Dwyane Wade ISO movie.

It makes no sense, and yet, all we've done is try to explain it away. "They're bored," we'd say, trying to find some sort of connection between the disposition of this team and that of the 2006 championship squad that listlessly glided through the regular season. "They're not deep," we'd say, which is true, but would only really be a full explanation if the Heat were consistently mediocre, which they're not. "They're poorly coached," some would say, but that ignores Erik Spoelstra's full body of work and the support he gets from his two stars.

But finally, in Game 5, I think I started to realize why the Heat's effort comes and goes. The answer: in many instances, the effort of Wade and James themselves comes and goes.

This was the most important game of the Heat's season to date, against an opponent that has somehow found a sixth gear (or maybe it's a seventh or eighth gear) after looking so ordinary early in the playoffs. And yet ... there were so many instances of Wade trotting back on defense, James refusing to cut off the ball and both complaining to officials.

Rajon Rondo was right: the Heat do complain a lot, and they can be victimized in transition because of it. And when he said "the Heat," he really meant James and Wade.

Take this sequence midway through the fourth quarter. The Heat were up three points, but momentum was starting to shift the Celtics' way. Watch Wade in these screenshots.

First, Wade passes to Mario Chalmers for a desperation three, then turns to the referee as if he's trying to ask for a foul, for some reason. Check out the bottom right corner. 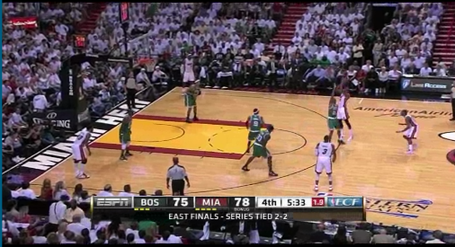 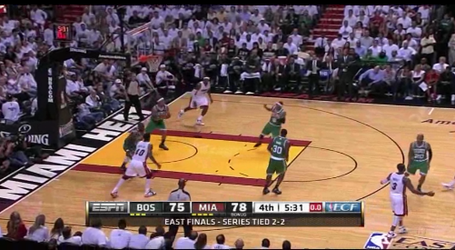 As he's doing that, Ray Allen is sprinting by him. Wade notices, but then only jogs back instead of trying to prevent an Allen three-pointer. Allen luckily misses this shot, but it's a wide-open look caused by Wade not giving the kind of effort you need to win. 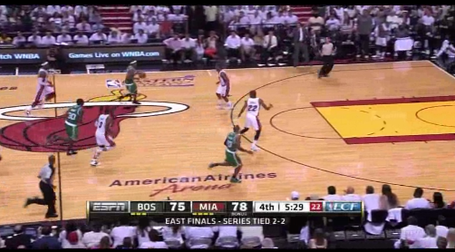 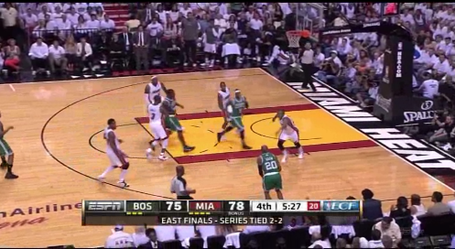 You may say that Allen was James Jones' responsibility, not Wade's, but Wade is one of the two stars of the team. It's a cliche, but it's true: the team takes on the personality of its best players. When Wade isn't going above and beyond with his effort, there will be breakdowns. This was just one instance of Wade not getting back defensively.

Let's not forget James too. While James had another excellent game, there were too many possessions where he made himself into a spectator offensively. James had nine fourth-quarter points, but only two in the final eight and a half minutes of the game. While he made some strong plays in that stretch at times -- the two open Mario Chalmers three-pointers were a direct result of James' drives to the basket -- he also was content to loaf on the perimeter off the ball on several key possessions midway through the fourth quarter.

For example, look at how little he moves off the right baseline/wing on this possession. 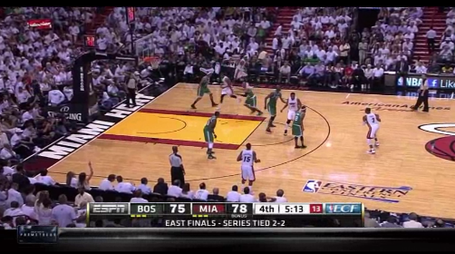 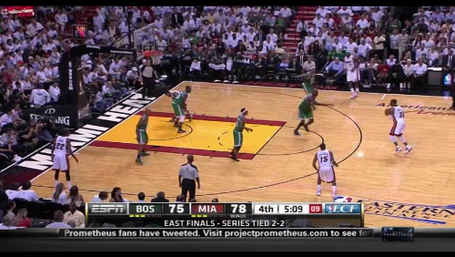 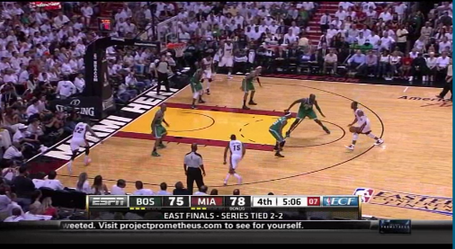 With the Celtics in a zone defense -- they would confuse Miami by shifting from zone, man-to-man and a hybrid throughout the game -- James needs to cut into open space to force defenders to account for him. He didn't, and the Heat's offense got stuck.

To be fair to James and Wade, there are many other reasons why the Heat lost this game. The Kevin Garnett dunk that galvanized the Celtics in the third quarter happened because Chris Bosh and Mike Miller both vacated the lane to race out to a three-point shooter. Wade's unbelievable, twisting layup with under two minutes left to tie the game was negated by Mario Chalmers forgetting he had switched defensive assignments. Both Chalmers and James ran to Rajon Rondo and left Mickael Pietrus wide open, giving Paul Pierce a two-on-one situation that he converted into two free throws. Those were critical errors. Credit also needs to go to the Celtics, of course, for executing one hell of a gameplan.

But there are windows into the Heat's inconsistency that can be explained by the two stars. Why is Wade trotting back on defense in the most important game of his season? Why does James cut so vigorously to the hoop on some possessions and stand around on others? I have no idea, and neither does anyone, really. We're just presenting facts and asking the question.

Such criticisms of both stars may be unfair. Such criticism of stars also come with being the stars that they are. At some point, Wade and James need to fully grasp that, as great as they are as players, their team often feeds off their inconsistent effort like it did in Game 5.