Cold-Blooded: Kevin Durant And The Thunder Have Arrived

Kevin Durant and the Thunder moved on to the NBA Finals Wednesday night, dominating the Spurs in the second half of Game 6, and continuing one of the most impressive playoff runs we've seen in years.

Share All sharing options for: Cold-Blooded: Kevin Durant And The Thunder Have Arrived

Durant played 48 minutes in Game 6 Wednesday night, scored 34 points, grabbed 14 rebounds, had five assists, and by the end of it deafening "M-V-P" chants were interrupting his TNT interview as he accepted the Western Conference Championship trophy on the podium. It doesn't get much better than that. ... And Game 6 was a fever dream on its own.

Remember two days ago? I said, "You won't see two better teams going head-to-head for seven games, you won't see more gutsy shots from EVERYONE, and you won't see many other series that you sincerely wish could go forever." ... Well, this game was exactly what I meant.

I was on the phone with a friend yesterday, gushing over the basketball in this series, both of us convinced that Game 6 was going to be the best of them all. We were right, obviously, but that's not saying much. Everyone knew Game 6 would be great. You knew coming in that the Spurs weren't going to lay down easy, and you knew the Thunder were going to be gunning at 110 percent looking for the closeout. And that's exactly how it played out.

And since the playoffs have left me cross-eyed and sleep deprived, we'll give up on trying to be coherent and just offer a handful of other random thoughts as OKC gets ready for the NBA Finals.

1. You Can't Help But Love The Thunder. If you don't enjoy watching this team, there are really only two acceptable excuses. First, you live in the Pacific Northwest and hate them for Durant (Portland), or existing (Seattle). Both of those make sense. Second, you've heard so many people say "You can't help but love this team" that you can't help but hate them.

That makes to sense to me, too.

As a counterpoint, here's Russell Westbrook trampling Tony Parker on a unicorn. 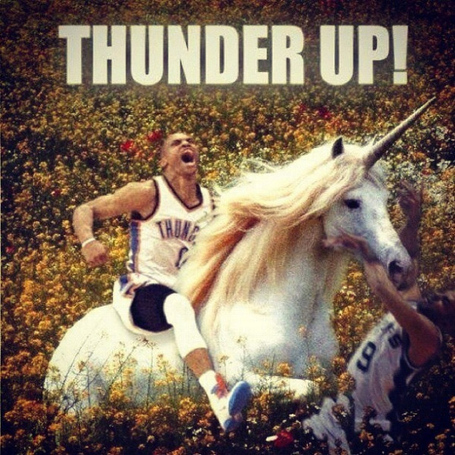 (via this fantastic collection of Thunder art)

You don't have to love the Thunder, but it's been a long time since we saw a team this good with so many genuinely lovable characters, all of whom happen to be absolutely deadly on the court. They make basketball fun, their fans are incredible, and I guess the best endorsement is this: If I wanted to explain to people why basketball is the best sport on the planet, I'd have them watch as many Thunder games as possible, and just wait for them to understand.

Whether it was a Russell Westbrook alley-oop that did it, a James Harden dagger, or Kevin Durant quietly murdering everyone, it wouldn't take long for them to see the light.

2. The Spurs Went Out Like Champions. This is like, the worst of the worst sportswriter cliches, but in this case it's kinda true, isn't it? Tim Duncan had 25 and 14 and Tony Parker had 29 and 12, they gave OKC their best shot, and when it was over, they weren't afraid to credit the team that beat them.

"This is actually a‑‑as sad and disappointed as we are, you really have to think about it's almost like a Hollywood script for OKC in a sense. You know, they went through Dallas, last year's NBA champion, then they went through the Lakers, then they went through us. Those three teams represent 10 of the last 13 championships, and now they're going to go to The Finals and play either Boston or Miami, and that'll be 11 of the last 13 championships. I don't know if anybody has ever had a run or gone through a playoff playing those kinds of teams. It's just incredible, and I think it's pretty cool for them."

Things fell apart for San Antonio in the second half, but part of that was inevitable. The Thunder missed a lot of open shots in the first, and the Spurs weren't going to shoot 60 percent from the field for the entire night. In any case... Hats off to San Antonio. They were a juggernaut all year, and had it been any team other than the Thunder, we're probably talking about the Spurs as NBA Champions in two weeks.

3. By The Way, The Thunder Are REALLY Good. You probably know this by now, yes. But still: According to ESPN's Neil Paine, they've got the sixth best offense in playoff history, and three of those offenses were the Seven Seconds Or Less Suns team. Among title contenders, only the Jordan Bulls from '96 and '91 were better than this year's Thunder.

So as much as a team full of 23-year-olds feels like a Cinderella beating down the big bad Spurs, keep in mind that the Thunder may be the best team to come out of the West in a long, long time. They've basically been unstoppable for three rounds, and against the past three teams to win the West, they lost a total of three games. Beautiful and terrifying, y'all.

4. We'll Miss You, Reggie Miller. Just kidding. Nobody will miss you, Reggie. If TNT doesn't replace you with Chris Webber next year we might have to start some sort of grassroots movement to overthrow the brain trust at Turner Sports. Also, SHOTS FIRED.

Shut up, Reggie, u phony. You weren't saying this crap after Malice in the Palace. And you haven't stuck up for one Pacer teammate since.

5. We'll Miss You, Captain Jack. This one's serious. Stephen Jackson was a force of nature in Game 6, he single-handedly transformed the Spurs when he arrived a few months ago, and if you don't love him enough already, you should probably read Johnathan Abrams' piece at Grantland. This might be my favorite NBA quote of all time.

"A lot of people mistake my passion for the game with being a thug or a gangster," he said. "I'm far from that. I'm just a guy who come up in the hood and came from nothing and made something and hasn't changed. I'm still going to be in Port Arthur all summer walking around with no shoes on, eating crawfish, barbecue, going fishing. I'm going to be the same guy, and I take pride in saying that because a lot of NBA players are not touchable. They're not real. But I take pride in being a regular guy that people can walk up to and I'm not Hollywood. I want people to understand that that's the person I am and I'm not changing for nothing."

NO SHOES AND CRAWFISH, SON.

6. The Thunder Were Just Better. This happens rarely so when it does I sorta have to gloat a little bit. Here's what I wrote about the Thunder and Spurs in my playoff preview six weeks ago:

...as dangerous as the Spurs have been, if both teams max out what they've got, OKC is just better. It's not San Antonio's age or athleticism or anything else that'll hold them back; no, if OKC can beat the Lakers and Mavs, two teams that've knocked them out the past two years (also the past two champions) they'll be coming into the Western Conference Finals with more momentum and more confidence than they've had all year. And when they're confident and hitting on all cylinders, they're just a better team than San Antonio.

Sure enough... Over the past month we've seen the Thunder transform into a monster. This wasn't a guarantee. They spent most of the second half of the season treading water, and it was this same Spurs team that exploded past them to the best record in the league.

But then the playoffs happened. Kevin Durant has hit another level over the past few weeks. The difference between Durant in 2012 and Durant the past few years is that he's not just a great jump shooter anymore. His handle's improved, and he's getting into the lane at will and forcing contact, even against someone like Stephen Jackson. This makes him pretty much unstoppable.

Then you throw in James Harden as his sidekick in crunchtime, and he's evolved, too. He can knock down jumpers or score off the dribble, and if you try to take away one, that just leaves you more vulnerable to the other. Harden's as deadly as it gets as far as crunchtime weapons are concerned. Especially since Durant is drawing double teams just about any time he puts it on the floor.

Russell Westbrook is still a complete wild card for OKC, and that's okay. One game it looks like he's grown leaps and bounds and turned the corner, the next, it feels like 2010 again. The key for the Thunder is that they don't need him to be perfect anymore. Westbrook can be in a funk, and it doesn't sabotage the offense the way it used to. Now they have a better James Harden, a better Kevin Durant, and they can survive. Then a few minutes later, when Westbrook turns it back on, the onslaught hits another level. This is why they have one of the best offenses in the history of the NBA Playoffs.

And on defense, Durant's improved, either Thabo or Serge Ibaka would be the best defender on just about any team in the NBA, and the biggest question mark with OKC the past few years is suddenly a strength all its own. Per SI's Zach Lowe, got six points worse San Antonio's offense got six points worse the past two weeks. Their length and athleticism made them sort of the perfect foil to the Spurs -- hence the past four games, once Brooks started playing more athletic lineups -- so there's no guarantee this dominance will continue. But it's worked against L.A., San Antonio, and Dallas, so it's not like the Thunder haven't been tested enough already.

That's the theme with all this, I think. For two years now, OKC had a group with all kinds of potential, but it had never really synthesized all at once. Even during the regular season this year.

But over the past few weeks everything's changed. They're all still not perfect, and occasionally you'll see Durant or Westbrook or Harden go into a funk, but the key is that when one or two of the Thunder's stars are struggling, the rest of the team is so good that it hasn't mattered. This is why it didn't matter that the Thunder are still young and sorta unpredictable. They've got so many good players capable of wreaking havoc, when one's struggling, another would pick it up. You can't predict who's going to dominate for OKC, but at this point it's inevitable that someone will.

So I was technically wrong with my prediction. The Thunder are never really hitting on all cylinders, even now. That only really happened in that one game against the Lakers. But it doesn't matter, because together, they've got enough weapons to overwhelm anyone, even if they aren't all clicking at once. This isn't just a fun young team; over the past month they've become a juggernaut that fears no one and goes for the kill for almost 48 minutes-a-night. It's scary.

A week ago people were talking about the Spurs as one of the greatest teams of all time. A week later, we see that OKC was the best team, and it wasn't really close. So I guess what I'm saying is, if all this seems like a heartwarming story full of fun stars and funny press conference outfits, keep in mind that up close, the Thunder are as cold blooded as they come.

And now it's on to the NBA Finals.

Thundering Ahead To The Finals: OKC Downs Spurs To Advance