Share All sharing options for: Great Moments In Passive-Aggressive Headlines

A lot of professional sports teams relocate and retain a significant, passionate following in their original cities. The San Francisco Giants, for example, have a loyal fanbase in New York. It's not unusual. This is not the case, however, in Seattle.

If you hadn't heard, the machinations that turned the Seattle SuperSonics into the Oklahoma City Thunder were ... well, let's just say it was not an amicable split. So when the Thunder defeated the San Antonio Spurs to advance to the NBA finals on Wednesday night, there was no joy in Mudville (it rains a lot in Seattle).

The Kennewick, Wash.-based Tri-City Herald "celebrated" the Thunder win with this knockout punch of a headline that is a pretty perfect summation of the prevailing sentiment in the Northwest: 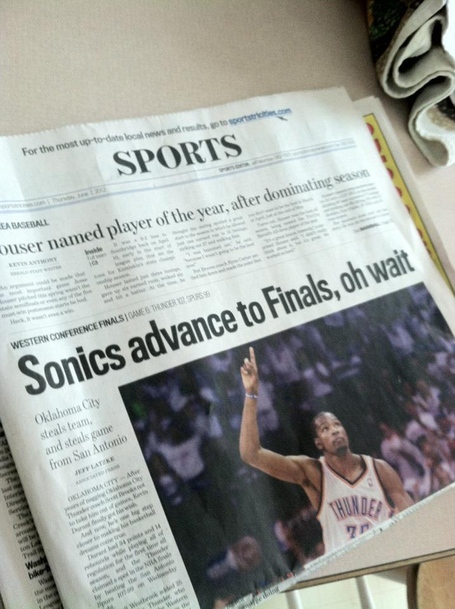 Sick burn, Tri-City Herald. Just to take a quick guess at the rough draft headlines that were considered before settling on this one:

- How Dare You. HOW DARE YOU

- Oklahoma City Thunder Probably Get Their Strength From Devouring Babies

- Literally The Worst Thing To Have Ever Happened

For all news and information regarding the 2012 NBA playoffs, please visit SB Nation's dedicated NBA hub.