With the Kris Humphries contract, the Mikhail Prokhorov era that other NBA owners (and their GMs) feared has arrived. Let the bullion flow. The Hook is a daily NBA column by Tom Ziller. See the archives.

Share All sharing options for: Welcome To The Mikhail Prokhorov Era, New York

Mikhail Prokhorov has loomed as the NBA's potentially most domineering whale for some time now, ever since he agreed to take the Nets off Bruce Ratner's hands in exchange for a prime investment opportunity in Brooklyn. By virtue of his wealth, he was going to spook some less rich owners. It was by virtue of his lack of concern about racking up losses that would send chills down the spine of his NBA contemporaries like Mark Cuban, Paul Allen and, yes, James Dolan.

Well, here we are.

The Nets' two-year, $24 million contract handed to Kris Humphries (a player who can rebound and ... yeah, rebound) is the official beginning of the Mikhail Prokhorov 'IDGAF' era. That it came within weeks of handing Deron Williams $99 million, Gerald Wallace $40 million, Brook Lopez $61 million and taking on the remaining $89 million of Joe Johnson's deal emphasizes the point: Prokhorov is ready to assert his advantage, and the rest of the league will feel the pain.

Why is Hump the breaking point here? Because Williams is certainly worth $99 million. Wallace is possibly worth $40 million. Lopez might earn that $61 million. Johnson is a good player who is worth some portion of that contract.

And it doesn't matter one bit to Prokhorov.

SI.com's Zach Lowe expertly laid out why the deal, absurd as it reads in a sentence, makes sense for Brooklyn. The team keeps a player it needs, preserves a vital trade piece in the never-ending quest for Dwight Howard and bolsters its ability to take on multiple bad contracts in such a deal. Of course, in the process, Humphries has become a bad contract. I imagine it will be as difficult in January to find a team willing to take on 18 months of Hump for $18 million as it was to find a third team to give him a lower-dollar four-year deal in July.

The thing is that no other team would toss $24 million at Humphries to preserve a trade chip, preserve eight to 10 rebounds per game and bolster its ability to take on Hedo Turkoglu's nasty contract and Jason Richardson's nasty contract in a few months. The L.A. Lakers traded Lamar Odom to a rival for nothing to save money, and cut ties with Derek Fisher for the same reason. The New York Freaking Knicks just watched Jeremy Lin run off with the Houston Rockets. The Dallas Mavericks have let Tyson Chandler, Jason Kidd and Jason Terry all waltz off within two offseasons of winning the title.

The Mavericks and Cuban are the closest comparison to the Nets and Prokhorov, but Cuban realized at some point that you really can't outspend your rivals to win a title. It takes rational team-building, and often that requires cap flexibility. Cuban has even gone so far as to caution his Russian friend that the NBA's salary cap doesn't allow for Manchester City-like "bought success." If anyone would know, it'd be Cuban, who spent more than any other NBA owner in salary and luxury tax from 1999 through 2011.

But consider where the Nets were -- terrible -- and where they are now. You can buy success in the NBA. You can't buy championships, but Prokhorov, aided by the bold moves from his general manager Billy King, has bought success. Tell me you don't think Brooklyn is an obvious playoff team in the East next season. That's success. It's not ultimate success, but it's enough success that will move merchandise, keep Barclays full and potentially get veterans to join cheaply in the next few years as the Williams-Lopez-Johnson core push for a title.

Look at the L.A. Clippers. All it took was landing Chris Paul to pair with Blake Griffin, and now they are getting Grant Hill -- Grant Hill! -- to jump aboard on the cheap. Next year, even though the Nets will be restricted in the sign-and-trade game and have a smaller mid-level exception to dole out thanks to the lockout deal, Brooklyn will be in play for the so-called "ring-chasers," just as the Clippers (a solid playoff team, but outside the realm of title contenders) are. That's success.

(If you're curious as to why other owners don't want to see this? Having a whale willing to spend like this raises the salary expectations of other players, like Carl Landry, who shouldn't be getting a smaller contract than Kris Flippin' Humphries. Huge contracts inflate the market.)

That Prokhorov's Nets handed Hump a two-year, $24 million deal on the same day that Dolan's Knicks declined to match Lin's three-year, $25 million contract feels like a moment. With a headline and a photo, SB Nation's NetsDaily really said it all on Tuesday. 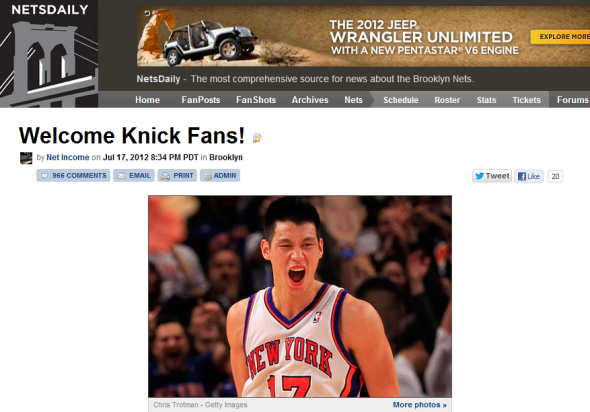 We knew the Russian billionaire would throw his considerable weight around at some point. It's happened. The Mikhail Prokhorov Era has begun in New York. Let the bullion flow.