Gilbert Arenas Is Selling His Mansion, And The American Dream Just Died A Little Bit

Share All sharing options for: Gilbert Arenas Is Selling His Mansion, And The American Dream Just Died A Little Bit

It seems like just yesterday that Gilbert Arenas was in the middle of building a million dollar pool in his backyard, complete with a full scale grotto, flatscreen TVs, a fish tank, a water slide, and a mural of himself in front of the Capitol and the White House. Alas, that was then (2008), and now (2012) Gilbert's selling that mansion for $3.5 million, and man, this waterslide photo just makes me sad. 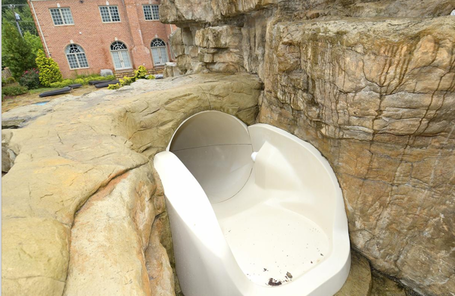 Maybe that waterslide's a metaphor for how the Wizards dreams turned out, maybe not.

This is where THE Gilbert Arenas had paintball wars with THE Nick Young, THE Dominic McGuire, and THE Andray Blatche. And some guys who were there hooking up stereo equipment.

It was Nick and Dominic and then Nick recruited last year's rookie, Andray Blatche. I thought Andray had enough of the pranks, but I guess he didn't. Andray brought his two friends, to make it five on their team.

My team was me, my friend John and three guys who were at my house hooking up stereo equipment.

So we finished buying everything and were in the store parking lot and Nick was mad that I had all the CO2 so he started to take some of mine. I was like, "Put the CO2 down or I'm going to shoot you with the paintball gun." But then he realizes I'm really going to shoot him with the paintball gun, and he puts it back. "You see what happens when you follow directions" But as I'm closing the trunk with the CO2 in it, he takes some and tries to jump in Dominic's car. I said, "Dominic, do not close that door." Nick is screaming, "Close the door Dominic! Close the door!" So Dominic left the door open. I go to Nick, "You have three seconds to put the CO2 back. One! Two!" He started to scramble to put it back and I got him anyway. I got him like six times. So he's laying in the car all mad saying, "I don't want to play no more."

It's where he proposed to his fiancee with a ring pop and a note.

So there we are at dinner and all her family is there, my dad, her dad, her friends, my friends, Antawn Jamison showed up, Mos Def and a couple people from Mos Def’s crew showed up. At the end of the meal, in front of everybody, I tell her that I have one last gift for her. I told her, "This is my gift" and I handed her the note and I sit down. She opens the note and she reads it and she says, "Read out loud," but sort of to herself under her breath because you know, you’re always going to read something to yourself before you blurt it out to the room. Then she reads silently, "Will you marry me?"

Then she flipped the note over to see if there was anything written on the back and then looked at me weird. I said to her, "You have to read it out loud." So she goes, "WILL YOU MARRY ME?" out loud so everybody could hear her. It worked. It turns out she ended up asking me to marry her. I was like, "Oh my God!!!" and started screaming like the girl who gets asked normally does. "I can’t believe you asked me!!!! Of course I will!!! Oh my God, it’s been six long years, what took you so long???!!!??? Oh my God!!! This is unbelievable!!!!"

But, I had to produce the ring. I had three Ring Pops ready with three plastic red Solo cups covering them up. I took her over to the cups and told her that whichever one she picks, that’s going to be her engagement ring. So she flips over one and it’s a cherry Ring Pop. She goes for the second one, it’s a grape Ring Pop. She flips over the third one, it’s watermelon. She’s looking at me like, "Where’s the real ring?!" but I just go, "Hey, no ring gets any better than that!" Everybody was laughing. But I had really given the ring to my son. So I go, "Give it to mommy," and my son actually gave the ring to her. So, for the record, she asked me."

It's where he conceived the idea for Gazo The Pranksta.

Gazo stands for Gilbert Arenas (G-A) and Zero (Z-O). It's about a group of kids who are the out crowd in high school. You know, there's more 'outs' then there are 'ins.' When you deal with high school, there is only 10 percent of the school that's popular. We're talking about the other 90 that nobody pays any attention to. That's who really runs the school. The premise is five kids ' all different nationalities ' that come together and basically save the school. For the older people who are out of school, everything that went on in high school that you can remember and for all the kids who are in high school living it now, those are the topics that are going to be in the cartoon.

So if you've seen Superbad, yeah, it's sort of like that.

It's where he convinced Adidas to release 20 different versions of his custom shoe that one year.

I'm a trend setter, people. I don't want other shoe companies to try to jack my style now. My swag is too phenomenal. If any other basketball player out there wants to compete with my shoes, go ahead, we can have a 50 and Kanye right here. We can start it up, baby. I'll be the bad guy. We can have a sneaker war. If you think about it, there are probably about 20-25 signature player shoes in the NBA that come out each season. Next year, I'm going to have 20 just by myself! So when all those other ugly shoes come out, you know that a new GilIIZero will be on its way shortly.

It's the house he didn't visit for a week, because, Relationship 101.

It's where he decided he needed to buy an island.

Diana Ross has one. You know, if you look at property in the states, if you look at my house, I paid $2 million for it and then there's an island for $1 million. I'm like, 'Woah, I have to buy an island.'

...And God knows what other insane ideas came out of that house. (For instance.)

But what I'm saying is, Gilbert Arenas was the most delightfully batshit pro athlete we've seen in decades, out there living in the dream on a daily basis, and his "fantasy playground" house was a perfect extension of all that. The dreams are totally dead now, yeah, and that waterslide looks like it hasn't been used in years. But screw it.

We'll always have the memories, and damnit, these photos of Gil's Grotto will live forever. 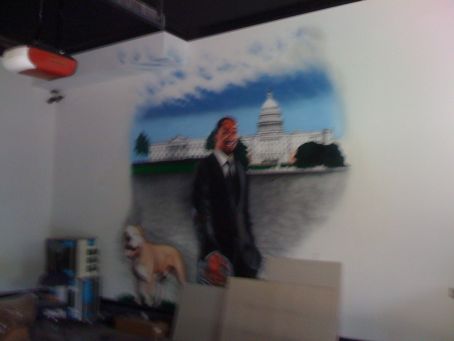