American Beauty: The Joy Of USA Basketball In 2012

USA basketball brought home gold in London this summer, but instead of reliving everything that made it special, it's all the teams that came before them who really make us appreciate Team USA in 2012.

Share All sharing options for: American Beauty: The Joy Of USA Basketball In 2012

It's Tuesday, so this is a little bit late after Team USA took gold against Spain on Sunday, but after digesting the Olympics over here, I wanted to talk about the basketball for a minute. No matter what year we're talking about, watching the USA play basketball on the international stage basically means watching a team of Basketball Gods playing a bunch of mere mortals.

The Americans are expected to win. We know this.

But there are different ways to win, and that's where international basketball gets interesting. In some ways it's a barometer for where American hoops is, in general. You can go back to beginning in 1992, when the USA first sent pros to the Olympics. It was the last hurrah for the goldenest of golden eras, everyone responded with appropriate levels of hysterics, and the Dream Team delivered on every level. The whole world fell in love.

Then came the "Dream Team 2" at the World Championships in 1994, and everything got complicated. Players like Larry Johnson, Derrick Coleman, Kevin Johnson, Shawn Kemp, Alonzo Mourning, Shaq were great, and the team was still the best by far. But as it dominated, it apparently endeared themselves to no one.

"It was not a team to be proud of," USA Basketball's Dave Gavitt remembers in Jack McCallum's book, Dream Team. "I don't know if vile is the right word or disgusting," one international star added.

The roster was overhauled before the '96 Olympics to include more of the original Dream Teamers, and the team won gold, but it was still a strange mashup between old school guys like Barkley, Malone and Stockton, and then younger stars like Penny Hardaway and Shaq. It wasn't the same. "The second Dream Team really sucked," Charles Barkley remembers now.

USA Basketball continued like this for the next 10 years; always better than anyone else, but with a team full of awkward fits clumsily thrown together, stars with waning interest and effort, all ending with underwhelming imitations of the Dream Team.

USA hit rock bottom at the Athens Olympics in 2004, where its starting point guard (Stephon Marbury) nearly got sent home days before the Games began, and the rest of the team was filled out with raw, immature young players (Carmelo, Amare, LeBron) and disappointing veterans (Richard Jefferson, Lamar Odom, Marbury, Allen Iverson). Even Tim Duncan couldn't save them.

That team lost in '04 at the Athens Olympics, and again in the 2006 World Championship, and it all epitomized the awkward, directionless post-MJ transition that'd been gripping the NBA for a while by that point. Basketball was just in no-man's land for a while there.

Remember watching the Spurs-Pistons Finals? Cavs-Spurs? Or, say, Vince Carter's Nets from those years? Or Antoine Walker's Celtics? Basketball was never really depressing, and true addicts always found something to enjoy (like Moochie Norris' hair), but compared to what we had in the '90s, there were a lot of depressing aspects of NBA basketball from 1998-2008. Which brings us to Team USA over the past few months.

They won, obviously, but Team USA (almost) always wins. The biggest difference is how much fun it was for the rest of us. We loved every ridiculous picture they tweeted, every Kobe quote, every blowout, and every time players like Anthony Davis or James Harden got a few minutes on the court in the fourth. Beginning during training camp in Las Vegas and right up until the gold medal game, Team USA made us smile for different reasons just about every day.

Now that it's over, reliving every memory isn't really important -- no need to overthink the genius of the "#GotEm" phenomenon -- but reliving some of the older memories might be.

Those old Olympic teams personified that basketball no-man's land we inherited for almost the entire decade after Jordan left the Bulls. Caught between a few different generations, none of whom could sell the game or make the masses love it the way the Dream Team did.

It was a time when angry old sportswriters would write cranky columns about the "AAU Culture" ruining basketball in America, or the Wall Street Journal could paste together a panicky trend piece where American Kids Flunk Basketball 101. Worst of all, even the most enlightened hoop fans couldn't help but wince and wonder if maybe the cynics were a little bit right. It was hard to argue with the 2004 Olympics. Or, for that matter, the unwatchable basketball we endured for a solid decade in the Eastern Conference. (The West was less anemic, thanks in no small part to foreigners like Dirk Nowitzki, Pau Gasol, and internationally-flavored Spurs, Suns, and Kings teams.)

But now it's all different. It's been different for a few years, actually, but it clicked for me during NBC's postgame interview Sunday, with Kobe, LeBron, and Kevin Durant.

On one end, you had the proud, forever-caustic superstar that's somehow become charming as his career hits the twilight. On the other, the newly crowned superstar smack in the middle of his prime, playing as well as anyone ever has, slowly winning over fans who swore they'd never cheer for him. And then in the middle there was 23-year-old Durant, still getting better, and more adored than ever. Each is the perfect ambassador in his own way.

It's tempting to look for a savior in all this, but none of this happened because of Coach K or Jerry Colangelo or David Stern or any other miracle worker you might see credited. The redemption of USA hoops is just a testament to the game itself, the way it evolves, and a generation of superstars who've either matured beyond their years or been humbled by mistakes and lessons along the way, bouncing back smarter and stronger than ever.

You can go right down the roster of Team USA, and it's more of the same. Kevin Love has turned himself into one the most enjoyable characters in the league and a full-blown superstar in Minnesota. Tyson Chandler survived injuries and immaturity to become one of the best defenders on earth. Chris Paul is the best point guard in basketball, and probably one of the classiest stars in sports. Russell Westbrook and James Harden each breathe a special kind of insanity into every game they play. Even Carmelo looks like he's (maybe) ready to turn a corner. Then you have guys like Anthony Davis and Kyrie Irving, ready to pick up the ball when the others walk away. The future is bright.

But two days later, it's the past that makes the present even sweeter. All those years when basketball lovers had to tolerate the "AAU Culture" trend pieces from hack columnists, when we couldn't really argue. For years, for one reason or another, there just weren't many young basketball stars from America who made Americans love basketball. Maybe the American hoops critics were right? Nothing proved their point better than our joyless national teams.

And you know: The current generation has made the entire conversation irrelevant. Maybe it's obvious by now, but it was fun watching Team USA remind everyone in London this summer. That joyless era of American basketball is totally, completely over. 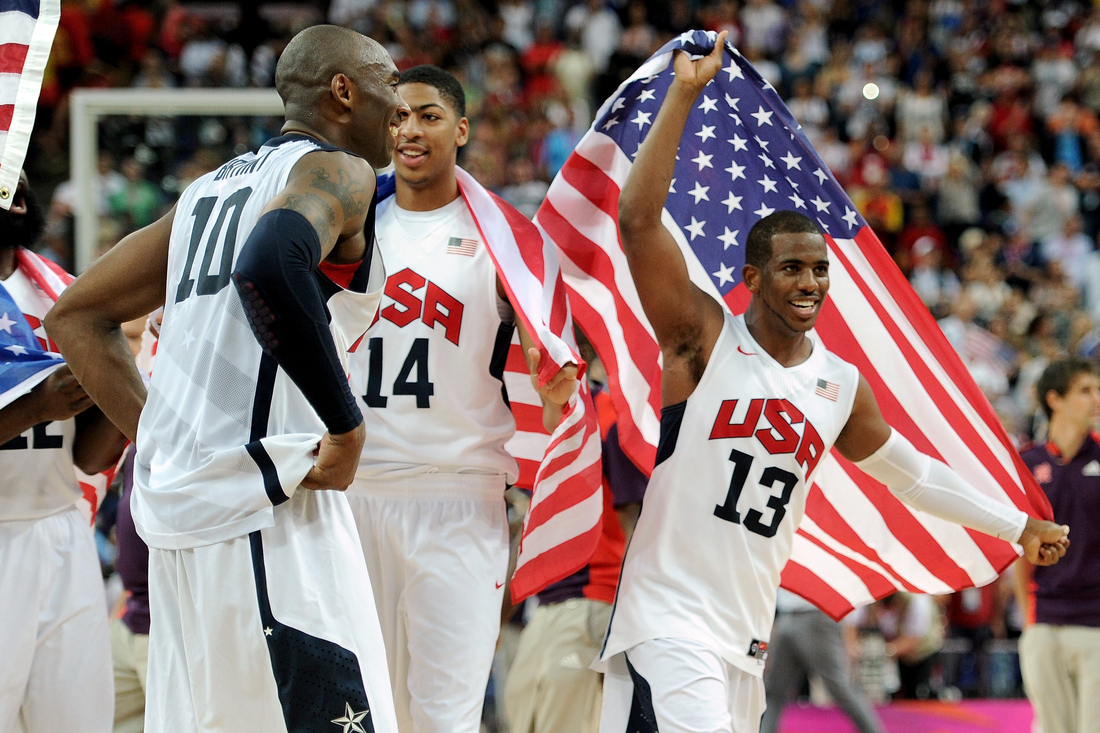