CHART: Team USA Is Taking How Many Threes?

Share All sharing options for: CHART: Team USA Is Taking How Many Threes?

Steve Perrin told you all about Team USA's bizarre new love affair with the three-pointer on Sunday, a romance that nearly killed the Americans' unbeaten record against Lithuania. For some context on just how insane Team USA's three-pointer rate has been, check out the chart below the jump.

This is Team USA's percentage of all field goals that are three-pointers compared to the top five teams in that category from the last NBA season. 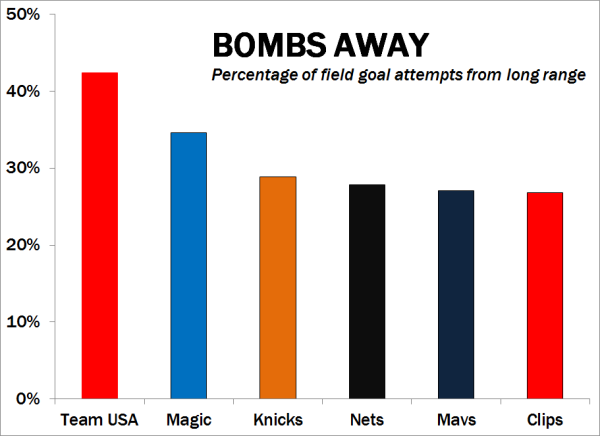 Team USA wouldn't have simply topped the category in the NBA -- they would have blown away the competition in gunning. Remember that the Magic were explicitly built to hoist as many threes as possible playing off Dwight Howard. Some 42 percent of Team USA's shots are threes. The Magic topped out at 35 percent. This is crazy.