NBA 3 on 3 Tournament -- Second Round Preview

Share All sharing options for: NBA 3 on 3 Tournament -- Second Round Preview

The first round of SB Nation's completely hypothetical NBA 3 on 3 Tournament is in the books and it's been a wild ride so far. If you're just joining us, you can head back to the beginning of the story stream to get the whole story, but to sum up, we at SB Nation were wondering what it might look like if every team in the NBA picked their best 3 on 3 team for a tournament. The NBA bloggers of SB Nation selected their teams, we added a couple of extra teams made up of players who were left off of other squads to round out a 32 team field, and we're squaring them off one by one. To add an element of randomness, after establishing a probability for the teams in each matchup, we're using dice to determine who actually wins the games, best two of three to advance to the next round.

Here are the seedings and rosters for the 16 teams still alive:

and here is the bracket heading into the second round: 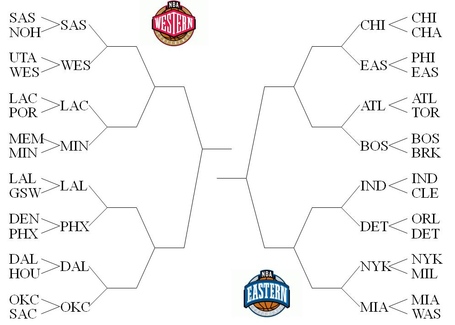 Despite the random element of using dice to determine the outcome of games, only three double digit seeds -- 13th seeded Minnesota and 11th seeded Phoenix in the West, 11th seeded Detroit in the East -- advanced to the second round. Both the Timberwolves and Pistons were favored in their games by our panel of judges, so those weren't even upsets once the competition started. Only Phoenix over Denver was anything close to a surprise based on random dice rolls in the first round (technically Atlanta was the slightest of underdogs as our panel had Toronto at 51 percent against the Hawks, but 49-51 is not going to yield a surprise either way).

With eight teams left in each conference, the Tournament now begins to look a little like the NBA playoffs. In fact, three of the eight second round matchups in the 3 on 3 tournament are rematches from last year's playoffs: Oklahoma City versus Dallas, Miami versus New York and Boston versus Atlanta.

The Leftover teams have gotten quite a bit of attention here, but they now have to face the number 1 seeds in each conference in the second round. For some of these players rejected from their original team just being in the second round is a measure of retribution -- Brandon Jennings, Gerald Wallace and Zach Randolph are all still playing in the tournament while the rest of the Bucks, Nets and Grizzlies have been sent packing.

It's dangerous to read too much into the probabilities from the first round since the strength of the opponent is just as important a factor, but the panel of experts gave the highest ratings to Miami (96 percent), Chicago (94), San Antonio (84), the Lakers (84) and Oklahoma City (80) in their first round matchups.

The best matchup of the second round may be the Clippers and the Timberwolves; Chris Paul, Lamar Odom and Blake Griffin against Ricky Rubio, Andrei Kirilenko and Kevin Love. That's a 3 on 3 game that anyone would love to see.

The second round gets started on Monday so be sure to follow it on the story stream.