Luck, Clutch And Noise: Which NBA Teams Win When They Shouldn't?

If there is a Basketball Unicorn, he is a Cleveland Cavalier. The Hook discusses the presence or absence of clutch.

Share All sharing options for: Luck, Clutch And Noise: Which NBA Teams Win When They Shouldn't?

When a team wins when it shouldn't, or when a club wins all of its close games, we attribute it to qualities with varying levels of mysticism. It could be because the team has a player who is clutch. Or it could be luck. Or, for the stats heads, it could just be noise that will reverse and even out eventually.

Looking at data from the last few years might convince you that the latter explanation has merit. So let's do that.

First, we'll look at last season. Expected win percentage uses points scored and allowed to figure out what teams' records would likely be assuming no clutch, luck or noise. It's been used heavily in baseball and, over the past decade, in basketball. See the Wikipedia article on Bill James' use of Pythagorean expectation in baseball for more background.

So who was clutch or lucky last year? 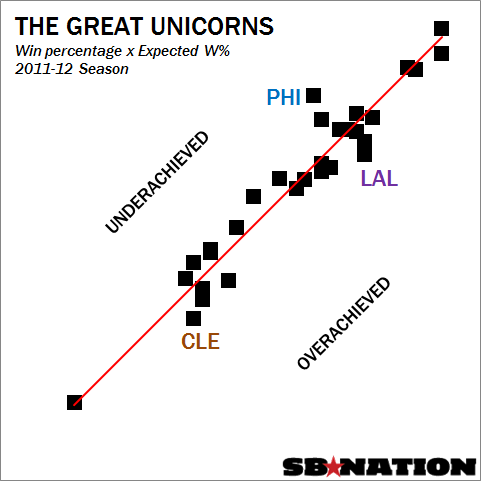 The L.A. Lakers overachieved their expected win percentage the most. Based on points scored and allowed, they ought to have been a 36-30 team. Instead, they finished 41-25. That's quite a difference!

But the Cleveland Cavaliers were actually quite close to the Lakers by the percentage difference. The Cavaliers were expected to be a 17-49 team based on points scored and allowed. Instead, they finished 21-45.

On the other side of the coin, the Philadelphia 76ers massively underachieved based on their expected win percentage. Points scored and allowed indicated that Philly was a 43-23 team. (That would have been the No. 5 record in the entire league.) Instead, the Sixers finished 35-31.

The Sixers famously won a number of games by massive margins, and tended to lose closer games. This isn't a good thing or a bad thing: it's just a thing. Philadelphia's large margin of victory overall fooled expected win percentage, though it's worth noting that the Sixers did do well in the postseason, beating the hobbled Bulls and taking the Celtics to seven.

The other two teams mentioned -- the Lakers and Cavaliers -- only open up more questions. If the Lakers, by virtue of Kobe Bean Bryant, are clutch ... how do we explain that young, bad Cleveland had a similar overachievement spread?

To look a bit deeper, let's take a glance five years worth of data. 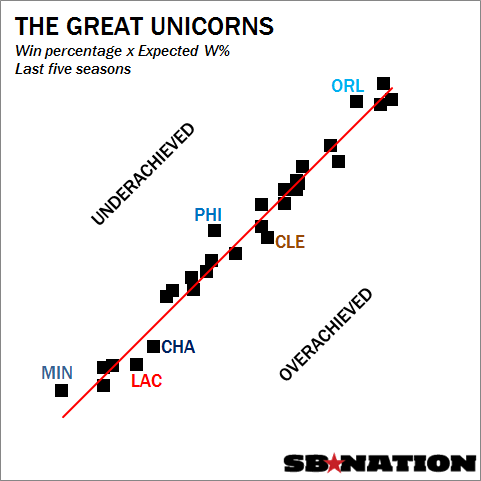 Well well well ... there are those Cavaliers again! Since 2008, Cleveland has the largest overall difference between win percentage and expected win percentage. Cleveland has gone 212-182 over the past five years. Points scored and allowed over that time would have them going 198-196. For three of those seasons, the Cavaliers had LeBron James. For one of them, they had Kyrie Irving. They've been really good and really bad in that stretch. So is it luck ... or are LeBron and Kyrie just that clutch? (Remember: this is pre-2012 NBA Finals LeBron.)

If this is clutch, please explain the Nos. 2 and 3 teams in overachievement: the L.A. Clippers and Charlotte Bobcats. The Clippers were expected to be 131-263, but went 143-251. The Bobcats were expected to be 140-254, but went 152-242. Note also that in 2011-12 -- the only season in the five-year stretch in which the Clippers had Chris Paul -- L.A. was middle of the pack in overachievement spread. So those bad Clippers teams, the Baron Davis ones, put together this spread.

Still convinced that it's clutch? Have the Cavaliers, Clippers and Bobcats been the most clutch teams since 2008?

Over the past five years, the Lakers were No. 5 in this measure, behind the Cavs, Clips, 'Cats and Mavericks. Again, the Lakers have Kobe, the most beautiful unicorn Earth has ever seen. So ... have the Lakers always been clutch?

Here's a look at the past decade of Lakers basketball, starring Kobe Bryant. 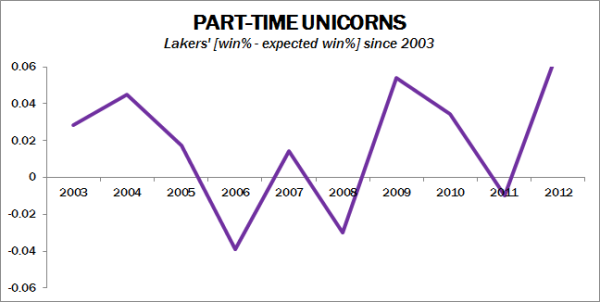 That's a little pitchy for the greatest clutch shooter of his generation. (And yes, Kobe does take the majority of L.A.'s important shots in close games. In three of the 10 seasons, the Lakers underperformed their expected win percentage -- they were either unclutch or unlucky, or the data was too noisy to tell us. In three more seasons, the team overperformed but the difference was small, putting it in the middle range of the NBA. In four seasons, the Lakers overperformed by a good enough clip to land them in the upper echelon of the league.

I don't know whether or not clutch exists. I am suspicious. I'm not a strong unicorn atheist. More an agnostic unicorn atheist. Please do not try to deliver me unicorn communion by way of Kobe game-winner YouTube clips. I have seen them. Most of them came against my favorite team.

I will tell you this, though: if there is a Unicorn, blessed be His soul, he roots for the Cleveland Cavaliers. And that, my friends, is awesome.