Share All sharing options for: NBA 3 On 3 Tournament: Previewing The Conference Semifinals

We've now completed the first two rounds of SB Nation's completely hypothetical NBA 3 on 3 Tournament. From an initial field of 32 teams, only eight remain and there are some real surprises among the conference semifinalists. If you're just joining us, you can head back to the beginning of the article stream to get the whole story, but to sum up, we at SB Nation were wondering what it might look like if every team in the NBA picked their best 3 on 3 team for a tournament. The NBA bloggers of SB Nation selected their teams, we added a couple of extra teams made up of players who were left off of other squads to round out a 32 team field (little did we know how important those teams would prove to be), and we're squaring them off one by one. To add an element of randomness, after establishing a probability for the teams in each matchup, we're using dice to determine who actually wins the games, best two of three to advance to the next round.

Here are the seedings and rosters for the eight teams still alive:

and here is the bracket heading into the third round, the conference semi-finals: 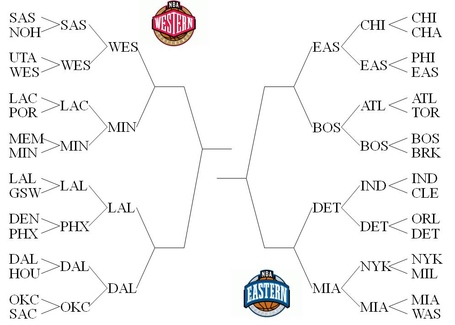 Through the entire first round of the tournament there were very few upsets. Phoenix over Denver was essentially the only series, out of 16, where the dice defied the odds established by our panel of experts and sent an underdog to victory. Sure, 13 seed Minnesota beat 4 seed Memphis and 11 seed Detroit ousted 6 seed Orlando, but in both of those cases, the panelists had established the double-digit seed as the favorite in the series.

The second round was an entirely different story. Of eight second-round series, five of them were won by the underdog as the dice were suddenly very unpredictable. As a result, some huge names and powerful teams are out of the tournament.

Chris Paul and Blake Griffin? Gone. (Along with Lamar Odom.)

Ironically, three of the teams that many NBA fans would probably love to see upset, the teams that some fans love to hate, are the only favorites that are still around. The Miami Heat (Wade, James and Bosh), Los Angeles Lakers (Nash, Bryant and Howard) and Boston Celtics (Rondo, Pierce and Garnett) are all still playing, seemingly on a collision course in the later rounds.

It's completely random and ultimately meaningless, but the dice seem to prefer 3 on 3 teams with a traditional lineup of one big, one wing and a point guard. Teams like Denver and Indiana who went with three wing lineups have been among the upset victims, losing in the tournament even when they were favored by the experts. The eight teams that remain are all more traditional (though Miami doesn't have a true point and Dallas skews a little bigger than the others).

Meanwhile, the leftover teams that were by definition afterthoughts both find themselves in the conference semis. The irony here is that five of the six players on the leftover teams remain alive in the tournament after the teams they were left off have been sent packing. Only Pau Gasol's Laker teammates have made it as deep into the tournament as Pau -- Milwaukee, Brooklyn, Indiana, Memphis and Oklahoma City are all eliminated while players from those teams play on.

There's no telling what to expect in the conference semi-finals. Will the favorites win as they did in round one, or will we continue to see crazy upsets as we had in round two?

You can find out starting on Monday so be sure to follow along on the SB Nation NBA 3 on 3 story stream.