Revenge Of The Celtics, The Sequel

The Boston Celtics didn't get broken up as predicted. Kevin Garnett didn't retire. Paul Pierce is still in green. What now? The Hook's first NBA Festivus preview of the preseason digs in.

Share All sharing options for: Revenge Of The Celtics, The Sequel

NBA Festivus has begun! Over the next five weeks The Hook will pass judgment on the NBA's 29-1/2 teams* right along with SB Nation's 30 awesome team blogs and our friends from outside the network.

* There's no way the Charlotte Bobcats qualify as a complete team yet. This is what happens when you embrace the Presti Plan. You get a fractional team for multiple years. In that case, maybe we ought to list just 29 teams, thanks to Rob Hennigan and Orlando.

First up is the Boston Celtics, America's Team. The team has escaped death dismantlement twice now. I believe that means only good things can now happen in the Celtics' wake.

The Celtics may be older than the technology that gave the world Joe Biden's hair plugs. But those dudes can still defend. Boston finished No. 1 in the league in defensive efficiency last season, just edging the Chicago Bulls (led by former C's assistant Tom Thibodeau) and beating No. 3 Philadelphia by a full point per 100 possessions. As a team, Boston was two years older than Chicago and more than four years older than Philadelphia. But two key defenders -- Rajon Rondo and Avery Bradley -- are pretty young, and will be around for this season.

Rondo, Kevin Garnett and Paul Pierce have been the on-court pillars of Boston's defense over the years. That has never wavered. 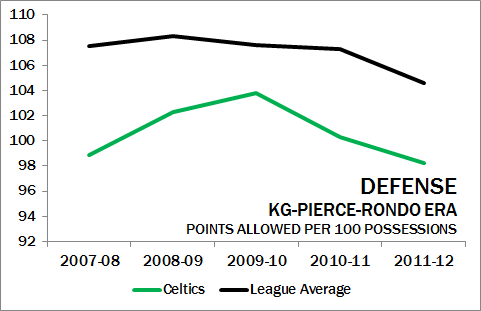 In the five seasons since the Garnett and Ray Allen trades, the Celtics have finished with the league's top defense twice, finished No. 2 twice and -- in that injury-ravaged 2010 season -- finished No. 5 once. (The club went to Game 7 of the NBA Finals that year.) This team can defend. That Boston finished No. 1 last season should give no one qualms about this team's ability to muck it up and stop opponents.

Boston has two key defensive strengths: shot defense (No. 2 behind Chicago) and turnover creation (No. 4). Mixing the two is potent and fairly rare: no team had top-5 ratings in both categories last season. When you think about it in practical terms, you see what makes the combo so powerful: opponents get fewer shots than usual because of the turnovers, and then have trouble converting those against the swarm. It's devastating.

The Celtics were not good on offense -- see more in Airing of Grievances below -- but they did shoot the ball well. Boston finished No. 5 in field goal percentage, No. 10 in effective field goal percentage and No. 7 in three-point percentage. The last figure will likely take a blow, however: Ray Allen, the greatest shooter of all-time, left for Miami. His likely replacement, Bradley, shot well from long-range last season, but per minute, Allen shot threes four times as frequently as the youngster. Boston already took threes less frequently than most clubs. Losing Ray could exacerbate that.

Overall, the offense looks like some kind of mess. Boston has survived it in the past, at least in the regular season, thanks to that defense. But much of Boston's playoff undoing against the Heat in the past two postseasons has been owed to the gross offense the Celtics produce. Boston finished No. 27 on offense last season, essentially tied with the Wizards and Pistons and behind the Warriors, Kings, Nets and Cavaliers. As mentioned, shooting wasn't the problem, though Boston lacked (and will now lack even more) enough three-point shooters to take advantage of a strength in long distance conversion rate.

But Boston -- as has always been the case during the Rondo era -- gives up too many possessions in the form of turnovers (No. 25 in turnover rate) and gets relatively few second chances (dead last in offensive rebounding rate). Those two problems allow Boston to go long stretches without points, especially when Pierce is on the bench. Bradley is a better defender than Allen, but that swap is going to pose additional problems for Boston's offense.

Jason Terry can help stop the bleeding ... if he gets plenty of playing time. We know Doc Rivers trusts Bradley -- he put Ray Allen on the bench in favor of Bradley. Will he put Bradley on the bench in crunch time to get J.E.T. out there, or will we perhaps see some smallball with Pierce sliding up to power forward? Time will tell.

Heretofore unaddressed is possibly the most insane contract of the offseason: Jeff Green for four years at $36 million. Rivers reportedly sees him as a smallball power forward. Those who recall the Oklahoma City Thunder's use of Green in that exact role must find this development curious. Join the club. I just can't figure out what it is that Green does that Boston lacks. Green is purported to be a defender and playmaker. You saw the team's defensive credentials (almost entirely without Green, save a small portion of the 2010-11 season) above. Rondo averaged 11.7 assists per game last season. I don't get it.

Rajon Rondo and Ray Allen do not have a very public and very awkward hug before the first Miami-Boston meeting.

Jeff Green's play is criticized by a broadcaster. (Jeff Van Gundy is not applicable.)

Boston beats Miami in a playoff series, should they meet again.

Darko Milicic matters for reasons other than humor.

Paul Pierce goes a month without reminding us he's secretly the funniest NBA star on the planet.

Rajon Rondo is added to three-point shoot-out at All-Star break.

Everything goes peachy all season.

Team MVP: Kevin Garnett, possibly still the most effective defender in the game.

Most Likely Championship Victory: Emmy for Most Grizzled Team (even odds with the Memphis Grizzlies).