NBA Festivus: The birth of the Brooklyn Nets

A new team is born in Brooklyn, but can the Nets make us forget that they are the Nets?

Share All sharing options for: NBA Festivus: The birth of the Brooklyn Nets

Why were the Nets so active during the NBA offseason? Not because the franchise wanted to make a good first impression on its new neighbors in Brooklyn. No, the team just wanted to make sure we got used to writing Brooklyn Nets enough in the summer that we wouldn't slip and call them the New Jersey Nets as we gear up for the season. It's all practicality.

The Nets did pretty much nothing well last season. In the four factors on offense and defense (so that's eight categories), New Jersey had one top-10 finish (offensive rebounding) and four bottom-10 finishes (shooting, turnover rate, shot defense, defensive rebounding). But looking forward to this season, a number of those categories should improve markedly.

Brook Lopez missed most of the 2011-12 season due to injury, and as a result, nearly all of the Nets' center minutes went to Kris Humphries, Shelden Williams, Jordan Williams, Johan Petro and Mehmet Okur. That's not good. Of course, Bropez is an awful rebounder, so his return isn't likely to help much there. But the second positional problem that New Jersey had was at small forward; the dearth of talent there forced Avery Johnson to play quite a bit of smallball with Anthony Morrow and Jordan Farmar on the wings. The midseason trade for Gerald Wallace helped that, though Crash spent equal time at each of the two forward slots. Getting Lopez bach, retain Humphries and adding combo forward Mirza Teletovic should all Wallace to stay in his comfortable small forward position. That's a boon for the Nets: they now have a complete line-up, not the version with two gaping holes they had much of last season.

Joe Johnson is the other big add for the Nets. He's been a volume scorer in the past, but joining a team with lots of options should allow J.J. to drop his usage rate and shot frequency quite a bit. If his skill curve is normal, you'd expect his efficiency to rise with fewer shots. 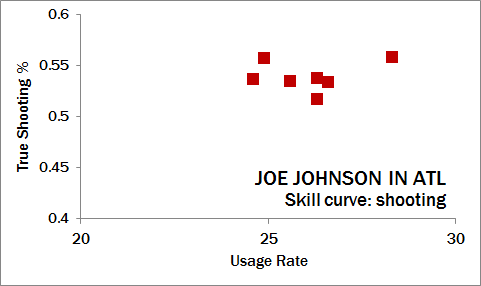 There's an outlier season there -- 2006-07 -- but otherwise, Johnson's spell in Atlanta fit the theory: in the seasons in which J.J. had to carry a heavier offensive load, his efficiency dropped. When the load was lighter (though it was never light), he was more efficient. Truth be told, though, Johnson was really, really consistent throughout his seven years in the ATL.

In Brooklyn, with a master table-setter in Deron Williams and a post presence in Lopez, Johnson should be able to drop down that usage rate. If he's comfortable playing off the ball that much, it could be a huge boost for an offense that has an excellent cupboard of weapons.

Defensively, this team will rely on whether Lopez can rebound and how athletic Wallace remains. J.J. is a solid man defender, and Williams -- though he struggles with speed -- can handle himself. Wallace was once one of the best defenders in the league, and he'll need to be Brooklyn's best stopper for the team to place decently on defense.

Another potential strength for the Nets: the bench. While the team lost Gerald Green, it did keep MarShon Brooks (a legit Sixth Man of the Year candidate) in the J.J. deal, and has Jordan Farmar, who was really quite good last season. C.J. Watson moved over, giving the Nets a great little backcourt rotation. If Teletovic, Andray Blatche and/or Josh Childress work out, we could be comparing the Brooklyn bench to the ones in Oklahoma City, Philadelphia and L.A. (both teams) as one of the best.

PRADA: More than your average Joe

VIDEO: Inside the Barclays Center

Defense seems like a huge gaping problem for the Nets, though. Wallace, as noted, has been excellent. But he's one man. The frontcourt is highly concerning. Lopez has the skillset (minus speed and agility) to be tough in the post, but he's never shown it. And again, he's a disastrous rebounder. Just awful. So bad that not even Kris Humphries' elite rebounding skill can cover it. Being so poor on the defensive glass puts too much pressure on the team defense, which on all teams has a tendency to crack on second-chance opportunities for the opponent.

But in most line-ups that include Lopez, the Nets should have plus rebounders at every other position thanks to the addition of Johnson and retention of Wallace and Hump. In addition, team defense tends to be something that comes together quickly when the right conditions are present. The Knicks added Tyson Chandler and replaced Mike D'Antoni with Mike Woodson around midseason, and ended up with one of the league's better oppositions. It happened quickly: defensive intensity and communal effort is contagious. The hope in Brooklyn is that the same would happen (without the addition of an elite defending center, of course).

Three-point shooting will be interesting to watch. Deron Williams was a willing gunner last season, but has two straight seasons at 33 percent from beyond the arc. Most of the team's other 2011-12 gunners are gone; MarShon Brooks has a rep as a scorer, but he takes threes about as frequently as Wallace. Johnson will need to augment Williams' spray heavily, and Brooklyn will be hoping J.J. shoots more like he did in 2011-12 (38 percent) than 2010-11 (29 percent).

Given my concerns, you may wonder why I have the Nets ahead of the Celtics in the Atlantic. Here's the easiest way to explain it: I trust Brooklyn's ability to be respectable on defense more than I trust Boston to be respectable on offense. Don't forget that for much of 2011-12, Boston looked dead: it even flirted with the No. 9 spot in the East for a while. Better performance down the stretch by the Sixers and Magic would have knocked the C's down in the final standings. I think the Nets are constructed to put that pressure on Boston.

A columnist sincerely and seriously writes that keeping Brook Lopez at a max contract if preferable to landing Dwight Howard, anyway.

Knicks fans outnumber Nets fans in the Nets' home arena this time around.

Andray Blatche puts it all together on a minimum deal. (This would also make Wizards fans light things on fire.)