Share All sharing options for: NBA 3 on 3 Tournament: Previewing the conference finals

We began SB Nation's NBA 3 on 3 Tournament, a hypothetical competition among 3 on 3 teams chosen from NBA rosters by NBA bloggers, three weeks ago with 32 teams. We are now down to just four, and the Conference Finals will get under way on Monday. If you're just joining us, you can head back to the beginning of the article stream to get the whole story, but to sum up, the NBA bloggers of SB Nation selected their teams for a 3 on 3 Tournament, we added a couple of extra teams made up of players who were left off of other squads to round out a 32 team field (little did we know how important those teams would prove to be), and we're squaring them off one by one. To add an element of randomness, after establishing a probability for the teams in each matchup, we're using dice to determine who actually wins the games, best two of three to advance to the next round.

There's remarkable symmetry to the four teams remaining. In a tournament that has been rife with upsets, two super teams that everyone suspected (some might even have dreaded) would meet for the championship are indeed still alive. Meanwhile, two teams that almost literally should not be here, those two after thought teams we needed to round out the bracket, are the other participants in the conference finals.

Here are the seedings and rosters for the four teams still alive:

and here is the bracket heading into the fourth round, the conference finals: 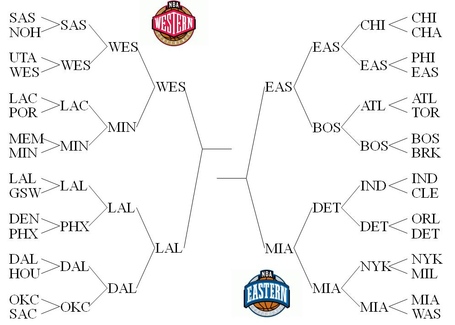 The great news about this particular quartet of Conference Finalists is that it proves rather conclusively that the results really are random. For while there does seem to be a pattern to the four teams, honestly, in their right mind would manipulate results to get to this foursome? As impressive as Miami and the Lakers are, don't you suppose that most fanbases would love to see them upset and eliminated? As for the leftover teams, they don't even HAVE fanbases. If the goal was to build interest in this tournament, you couldn't do a lot worse than to have two teams that everyone already knew would be there and two teams that no one owns comprise your final four. So yay random dice rolls!

Can these pesky leftover teams actually fend off the inevitable Heat-Lakers Final? Can they continue the string of upsets that have brought them this far? Or will the privileged super teams meet in the final? We'll find out next week. Be sure to follow along on the SB Nation NBA 3 on 3 story stream.