The Bulls chose saving dollars over bringing back the bench that helped the team win the most regular season games in the NBA each of the last two seasons. We check in on how the departed members are faring on their new teams.

Share All sharing options for: Chicago Bulls' 'Bench Mob,' then and now

The rich man always gets a bad rap. Mr. Burns wrecked havoc on the humble town of Springfield, never remembering his employees' names and plagued by an unfortunate tendency to release the hounds on anyone who tried to get in the way of his evil schemes. Scrooge McDuck had so much money he didn't know what to do with it -- so he simply went swimming in all those gold coins. George Steinbrenner wouldn't so much as show his face on Seinfeld.

Jerry Reinsdorf has helped bring the Chicago Bulls six championships, and the fanbase is still largely convinced 'winning' isn't high on his list of priorities.

Related: Bulls coming together as Rose's return from injury looms

A rough life, I know. Reinsdorf isn't exactly Mr. Burns; he isn't inherently evil. He cried when Paul Konerko gave him the ball he caught to record the final out of the 2005 World Series for his beloved White Sox; he named the Bulls' practice facility after his longtime assistant Sheri Berto following her passing in 1991. But in the time since Michael Jordan walked away from the Bulls, Reinsdorf's lack of a financial commitment to the franchise has been an obvious obstacle in the way of winning another title.

Never was this more evident than when the Bulls chose to dismantle their bench this past summer, choosing to save money over retaining several key players. Bulls fans were upset, and they had a right to be. No one can fault an owner for being unwilling to bleed money, but Reinsdorf isn't exactly bleeding money. Quite the contrary. The Bulls are the most profitable team in basketball, and they're also one of only six franchises never to pay the luxury tax.

Just how much money do the Bulls make? Save for the gigantic TV deal that puts the Los Angeles Lakers in another stratosphere, the Bulls are essentially unparalleled. According to Forbes, the five most profitable teams in the NBA made an average of $37 million over the last five season. Only eight teams made more than $15 million in 2011-2012. The Bulls? They have averaged over $55 million in profit over the last five seasons. It's easy to make money when you aren't investing it back in the team.

Much of the outrage over Reinsdorf's fiscally conservative ways has subsided as the Bulls have gotten out to an impressive start, even with a retooled, decidedly less expensive bench. We really just want Derrick Rose to come back healthy, honestly. And yes: Gar Forman and John Paxson deserve credit for keeping the team competitive after it tied its own hands, though that was never really the point.

Given that we're essentially at the halfway mark of the NBA season, it seems like a good time to check in on the progress of those discarded by the Bulls this summer. You'll find bar graphs of four players below -- their per-36 minute product last season in Chicago labeled in red, their numbers in new homes this season labeled in black. 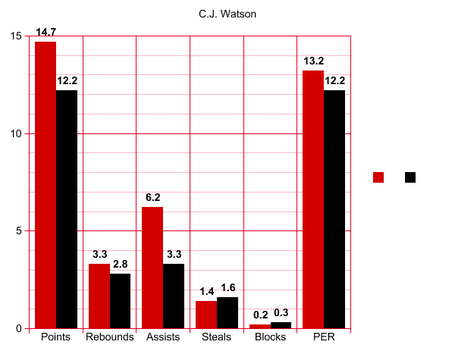 The Bulls decided against bringing Watson back on a one-year, $3.7 million team option, choosing instead to sign Kirk Hinrich to a two-year, $8 million deal. Hinrich has been bad for the Bulls thus far and it's unthinkable to imagine him on the team next season, but at least Watson isn't exactly making the Bulls look like fools for passing on him. Watson is really struggling on the Brooklyn Nets.

After scoring 15 points on nine shots in his first game in Brooklyn, Watson has failed to show the scoring acumen he demonstrated in Tom Thibodeau's point guard-friendly offense. He's only topped double-figures in scoring six times this season, and he's only scored 13 points or more four times. As you can see from the graph, Watson's numbers are pretty much down across the board.

Bulls fans have harped on the brick parade Hinrich throws up nightly, but his shooting numbers aren't much worse than Watson's. C.J. is shooting 38.3 percent from the field, Hinrich is shooting 37.5. They connect on threes at about the same rate; Hinrich is also a superior passer (6.8 assists per 36 minutes) and defender.

We're not ready to call this one a win for the Bulls, but maybe it isn't a loss, either. 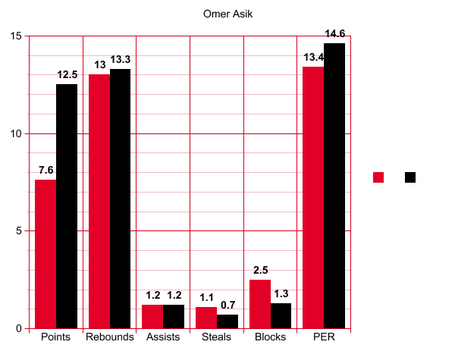 Asik was the Bulls' biggest loss this offense, literally and figuratively, but retaining him would have been a tall order. Because of a provision in the CBA, the Houston Rockets were able to engineer a 'poison pill' contract for Asik -- they couldn't pay him more than $5 million per season in the first two years of the deal, so GM Daryl Morey decided to pay him what amounts to a maximum salary in the third year of a three-year deal. To say this was unexpected for someone who had never averaged more than 3.1 points per game would be putting it lightly.

No one in Houston is complaining over Asik's contract now. The 26-year-old center has been a revelation for the Rockets this season, using a large bump in playing time to post some big production for the Rockets. Asik never averaged more than 14.7 minutes per night during his two seasons in Chicago, but he's playing just a shade under 30 minutes for the Rockets. For a guy who always seems to have endurance issues on the Bulls, this is a bit of a surprise.

Asik is taking 5.8 shots per game at the rim this season, according to HoopData, and he's converting 60 percent of them. In Chicago, he never even took two shots per game at the rim. While his blocks have gone down, his defense is still very good. Perhaps most importantly: Asik's fouls per minute are way down. He averaged five fouls per 40 minutes in 2011-2012 on the Bulls, now he's only fouling 3.6 times per 40 minutes. 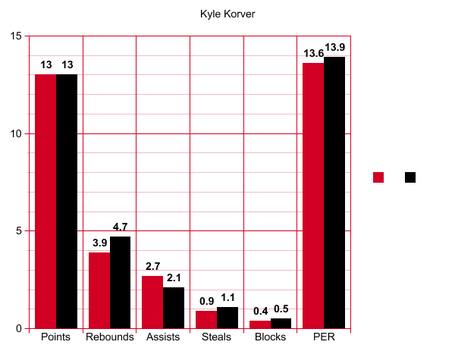 Of all the cost-cutting the Bulls did this summer, dealing Korver to Atlanta for nothing more than a trade exception might have been the most egregious move. The Bulls are a horrendous three-point shooting team this year, and desperately miss Korver's signature skill. In Atlanta this season, Korver is doing what he always does: knocking down a ton of three-pointers at a very efficient rate.

Korver is making 2.6 threes per game this season, up from 1.8 last season (he's also playing seven more minutes per game). That he's making them at a 45 percent clip is most impressive of all.

Korver's replacement in Chicago, Marco Belinelli, has played some nice games, but Korver is ahead of him in most areas. Korver's made 49 more three-pointers than Belinelli. Korver's field goal percentage and three-point percentage are each at 45 percent, Belinelli is around 40 percent from the field and beyond the arc. Korver is nearly doubling Belinelli's rebounding numbers per 36 minutes, as well.

Oh, and the Bulls haven't used that exception yet. It expires after one year. Let's just say if the Bulls make a deal to bring back money, it would be the upset of all upsets. 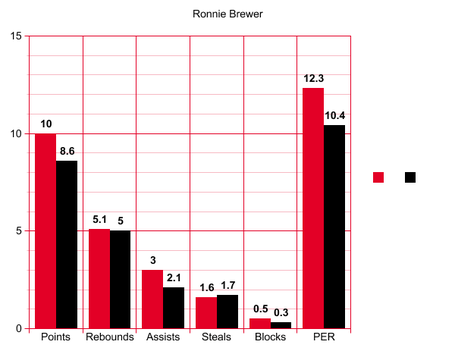 Jimmy Butler was not a better basketball player than Ronnie Brewer coming into this season, but he might be right now. Brewer has struggled after a solid first month on the Knicks, failing to average even three points per game in December and January. As Iman Shumpert has returned for New York and Ray Felton starts to get healthy, there simply isn't much playing time for Brewer anymore.

Butler continues to make strides for the Bulls. He's averaging 14 points and 45 minutes of playing time in the two games Luol Deng has been out. He shut down Kobe Bryant in Monday night's win over the Lakers. Butler has a ways to go offensively, but he's good at drawing, good at getting offensive rebounds and is establishing himself as a formidable wing defender.

Ricky O'Donnell is the editor of SB Nation Chicago. Follow him on Twitter or reach him at richardpodonnell@gmail.com.