Which players were snubbed when the full 2013 NBA All-Star rosters were revealed? We provide a list of players who could have made a case to go to Houston.

As usual, the competition for the seven reserve spots for each of the conference's All-Star teams left deserving players out in the cold. The 2013 NBA All-Star reserves were announced on Thursday after being voted upon by coaches, and in the end, Stephen Curry and Brook Lopez were perhaps the biggest snubs of all.

It's hard enough to decide on the best players in each conference, much less how to weigh career accomplishments against recent performance as well as the always-controversial question of whether teams "deserve" a certain number of All-Stars.

Still, Curry was passed over for teammate David Lee, and Lopez was among three potential All-Stars for the Brooklyn Nets that didn't make the cut.

Here's a look at the guys who have the most right to be upset by Thursday's announcement:

When his ankles are right, Curry is an unstoppable offensive force for Golden State. But Curry will have to wait his turn behind a deep list of established stars after getting passed over in favor of teammate David Lee. He's shooting 45.1 percent from beyond the arc this season, which is higher than his overall field goal percentage (43.6 percent). Curry commands the Golden State offense with ease, and he's a big reason why the Warriors have posted such an impressive record in the first half of the season. Coach Mark Jackson thinks so, at least.

C'mon Coaches! Ur Better Than That!!!!!#StephCurry

Lopez has become a better defender and a tougher rebounder this season, and he's maintained his excellent production on the offensive end in the process. The Nets desperately need their big man on the floor, and he's been arguably the most consistent player for Brooklyn this season. Missing a chunk of the season because of injury likely didn't help his numbers, nor his recognition. Thus, he lands on the outside looking in.

Commenters on Nets Daily's all-star selection thread were not happy. 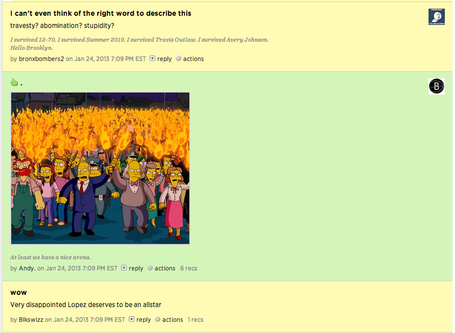 Crawford may come off the bench, but he's arguably the third-most important Clipper behind Chris Paul and Blake Griffin. He provides the team with instant offense in moments of need, and his ability to create off-the-dribble is something that helps make the bench unit so deadly for L.A. But with Curry missing the boat, it's no surprise Crawford did as well.

It's not one of his best seasons, but Paul Pierce is still at the core one of the better players in the NBA. The Celtics' disappointing record, however, lands him on this list. It's the first time in 12 seasons that Pierce hasn't made the team while healthy.

Given the Celtics' problems though, it might not be so bad for Boston fans to miss him in Houston:

No Pierce in All Star game. Sweet, more rest!

The Nets have ripped off 12 wins in the 14 games since they jettisoned head coach Avery Johnson, and Williams has been a big reason why Brooklyn is back in the mix for a top seed in the Eastern Conference. After a slow start to the season, he has posted 18.7 points and 8.5 assists per game during the month of January while shooting 42.3 percent from the field and 40.0 percent from beyond the arc. The Nets will go as far as D-Will can take them this season. As far as his All-Star selection goes, however, the recent success was too little, too late.

Ibaka is still disrupting opposing offenses with his ability to block shots, but his biggest strides this season have come on the offensive end of the floor. He's become a better shooter and a more skilled offensive player, and he's helped fill the void left behind by James Harden by scoring more efficiently than he ever has before in his NBA career. That said, the thin bench in the All-Star festivities makes it hard for even the Thunder to put three players in the game.

Zach Randolph is putting up better raw numbers than Gasol, but anyone who has watched Memphis this season knows that Gasol has been at the center of the team's surge to the upper crust of the Western Conference. In that, Gasol's absence in the All-Star game is a shame. He's among the team leaders in minutes played, and his presence on the defensive end of the floor has helped Memphis stay near the top of defensive rankings.

Horford has returned to form following his injury last season, and he's a big reason why the Hawks have been so successful this season. With an average of 15.6 points and 9.8 rebounds per game, Horford is close to posting a double-double average. He's already recorded 21 double-doubles in 39 starts this season, but the change in All-Star voting -- deleting center and lumping them in with frontline players -- perhaps caused Horford to miss out because of the increased depth in competition.

If you've ever wondered if coaches vote on the basis of team record for this individual honor, any consideration for J.R. Smith would be proof of that. He's had a nice season, but most of the hype comes from big moments and off-balance game-winning shots. Nevertheless, Charles Barkley and Shaquille O'Neal were very outspoken that Smith deserves a chance to make the roster after the selections were announced.

It's been a career year for Mayo. His numbers are up across the board, and he's scoring more efficiently than ever before. He's finally fulfilling his potential as a top-end scorer in the NBA, and his 42.6-percent mark from 3-point range is a good sign that he's starting to become the shooter everyone projected him to be prior to the 2008 NBA Draft. But his production has been inconsistent to a degree, and Dallas' struggles ultimately put him on the outside looking in as far as the All-Star debate goes.

Faried plays his role perfectly for the Denver Nuggets, though that niche in a team-oriented system might have led to him landing on this list. His motor is always running at 100 percent, and he consistently crashes the boards (14.2-percent offensive rebound rate), runs the break and frustrates opposing big men. The Nuggets want to play fast, and Faried helps them dictate tempo and pace on a nightly basis.

Big Al seems to post great numbers every season, but he's always on the fringe of the All-Star conversation. This year, it's the same story. He has posted 21 double-doubles this year and leads the Jazz in minutes played, scoring and rebounding. He's a big reason why Utah is in the playoff conversation in the hyper-competitive Western Conference.

The Milwaukee Bucks are on the rise, and the recent offensive surge from Jennings has been a big reason for the Bucks' success. Jennings missed the All-Star cut last season and slipped into a funk, and he didn't catch the All-Star bus in 2013 by saving some of his best (and most efficient) performances for the week leading up to the reserve announcements this year.

However, even some Bucks fans admitted that his case wasn't especially strong:

If you're looking for a Bucks fan who's outraged about Jennings not making the all-star team, I am not your man.

It's been a down year for Johnson in nearly every statistic across the board, and plenty of other players have a strong case for making the roster ahead of the starting shooting guard for the Nets. He got off to a slow start this season, but he's picked it up a bit since then for a team that's been pretty hot after Avery Johnson's firing.

Smith has been solid, but he's posting the least efficient scoring numbers of his NBA career. He's still scoring a lot and stuffing the stat sheet, so it's hard to argue that he's not an integral part of the a Hawks team that has surprised people around the league with a strong start to the year. But the Hawks didn't keep up the strong winning pace, and in the end, Smith might have lost out because of it.

West is still a premium pick-and-roll threat, but his efficiency has dropped a bit this season as the Pacers' offense has struggled to score. Indiana's sub-par offense is a cause for concern, but it's hard to blame West for any of the team's failings on that end of the floor.

Kirilenko signed with the Timberwolves for big money during the offseason, and so far he's been worth every penny. But he's not the household name to earn what he might deserve in an All-Star nod. Still, it's as if he never missed the 2011-12 NBA season. The 31-year-old veteran has been a disruptive perimeter defender for Minnesota, and he's scoring at a surprisingly efficient rate as well.

Which of these players had the best case to make the All-Star team? Are there any names we missed? Let us know in the comments.