Everything has turned around for the Rockets since Kevin McHale decided to make the team run. The Lakers learned that the hard way on Tuesday.

Share All sharing options for: Lakers vs. Rockets: Houston runs toward legitimacy

Back in late December, when the Rockets were just another .500 team struggling for relevance in the crowded Western Conference, Kevin McHale offered a simple solution. "We've got to play with pace for our team," McHale said. "Being tired, we're too young to be tired."

Oh, there were other concerns. Questions about rotations and depth and the big one: whether Jeremy Lin and James Harden -- two ball-dominant guards -- could function together in the same backcourt. But to McHale this was simple: play fast. This was the only way they could separate themselves.

That night the Rockets dusted the Knicks in Lin's New York homecoming by scoring 109 points. Two nights later they put up 125 points on the Sixers and then 121 on the Grizzlies and another 120 on the Bulls. NBA teams don't regularly put up 120 on anybody, let alone some of the finest defenses in the league, but the Rockets were just getting started.

Already one of the faster-paced teams in the league, they kicked it up a notch in December averaging over 101 possessions and the offense has surged right along with the faster pace. They've topped out a rather ridiculous 113.6 points per 100 possessions in January and that was before they hung 125 points on the Lakers on Tuesday after trailing 18-4 less than five minutes into the game.

Not that this particular result was unexpected. Without Dwight Howard and Pau Gasol, the Lakers were reduced to starting Metta World Peace and Robert Sacre, which meant their notoriously thin bench lacked both their top player and cheerleader. At one point, Kobe Bryant was out there trying to hold things together with Chris Duhon, Earl Clark, and Jodie Meeks with fairly predictable consequences. Almost makes a man miss the halcyon days of Smush Parker.

But enough about the Lakers. They've sucked so much of the life out of this season that the truly meaningful revelations sometimes get lost. Revelations like the Rockets, who have now won 10 of their last 12 including five straight, and suddenly they look very much a playoff team at 21-14.

Now, here's where the sober NBA analyst is supposed to dutifully note that teams that are hard-wired to run in the regular season are suspect in the playoffs until proven otherwise. Just wait until May when the games slow down and points are earned in the man's world of halfcourt slow-down offenses and grind-you-down defenses.

You know what? Screw all that. There's plenty of time for it later and if the Rockets can stay the course we will hear it ad nauseum this spring. Right now let's enjoy the fact that a team with five new players and only two rotation players from last season has figured out how to play the most entertaining, and at times beautiful basketball in the league.

Harden is tremendous, of course. A low-to-the-ground master of feints and fakes, he is capable of taking games over all by himself. He can score -- or put himself in position to score -- practically every time he touches the ball, which is one of the reasons people wondered if a point guard like Lin was truly necessary. 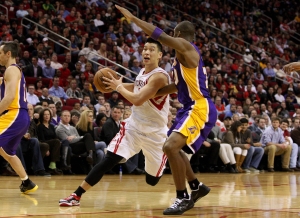 It turns out that he is. Lin's game started to pick up with that win over New York and the Rockets have hit on the rather ingenious method of maximizing their time on and off the court by having one sit while the other runs the show. They are still a work in progress as a duo, but it's no surprise that the Rockets hit their stride when Lin's play took a turn for the better.

Manning the middle is Omer Asik, a rugged screen setter and fantastic rebounder. Opposing guards bounce off Asik picks like so many bumper cars. He, along with Harden, is a big reason why the Rockets should not be dismissed out of hand come playoff time. Yes, they give up points, but if you're going to score on Houston when Asik is on the court you're going to have to work around him because he is practically immovable under the basket.

And in Chandler Parsons, they have the right amount of athletic freak to complement an otherwise earthbound lineup. A classic jack of all trades corner man, Parsons would be miscast on a team that asks him to do more, but on this one he provides the appropriate amount of everything.

There have been other more serendipitous events. Patrick Patterson's foot injury allowed Marcus Morris to take his place in the starting lineup -- a group that is outscoring opponents by better than five points per 100 possessions, as compared to the one with Patterson that was a -5, per NBA.com.

Morris offers a jolt of athleticism and three-point shooting, but a funny thing has happened to Patterson since he came back. He's playing better as a reserve. Patterson has made 27-of-38 shots in his last five games while averaging better than 12 points and 5 rebounds. Patterson and out-of-nowhere find Greg Smith have give Houston a strong, and versatile reserve frontcourt.

It's important to note that Smith didn't just appear on the scene. He spent most of last season with Rio Grande, the Rockets' D-League affiliate. They were the first to operate the so-called hybrid relationship, meaning that the Rockets run the basketball side of the franchise. Morris, a first round draft pick in 2011, also put in significant time with the Vipers and returned a capable rotation player. These developments are not accidents.

All that and Carlos Delfino makes funny faces whenever he makes threes, which has been happening a lot lately.

Now it gets hard. The Rockets have 10 of their next 13 on the road with only brief trips back home for games against the Clippers, Nuggets and Nets. There's only one way to play through a stretch like that and it is to run.