J.J. Redick's ability to shoot from deep makes him a potent addition to the Clippers, but his off-ball movement will be even more important to the team's offense. 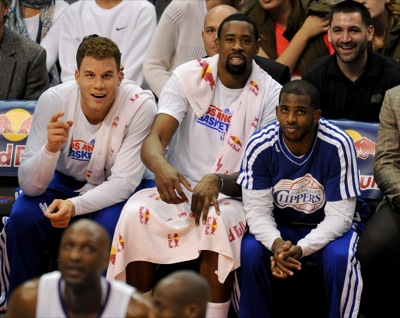 The addition of J.J. Redick was one of many moves that solidified the Los Angeles Clippers' summer of bold action. Yes, the team added a guy who shoots nearly 40 percent from three-point range. Yes, they upgraded one of their weakest positions -- shooting guard -- with a player who should complement a ball-handling point guard like Chris Paul perfectly by draining spot-up threes.

It's what his off-ball movement can create for the rest of the offense, though, that will make him invaluable to the Clippers.

The threat of Redick maneuvering around a screen and draining a three is the kind of simple basketball motion that defenses must worry about. If not -- like the Detroit Pistons show below -- it's going to be a long day for perimeter defenders chasing Redick:

Redick made that shot, but more importantly, he isn't a one-trick pony. If the defense takes away his catch-and-shoot opportunities, he can put the ball on the floor and create for the rest of his team.

Here, he comes off a screen from Gustavo Ayon. Instead of stopping on the perimeter, he curls into the paint. This forces the entire Raptors defense to collapse -- a poor defensive possession from Toronto forced by the need to react to Redick's off-ball movement.

Suddenly, Redick has many options to find the open man.

This is an extreme example, but it shows how Redick's movement can create opportunities for his teammates.

Option 1 is hitting Ayon, the screen-setter, for an easy shot attempt at the basket.

Option 2 is kicking out to Nikola Vucevic for an open mid-range juper.

Option 3 is Arron Afflalo, open for the corner three.

Option 4 is passing back to the top of the arc to Jameer Nelson, the initial passer, for him to step into a three.

Redick decides to pass to Afflalo, who drains the spot-up three-point attempt.

This will create opportunities for the off-ball screener to roll away from a defender who has to decide between closing out on Redick or rotating back to the basket. Redick has mastered the pocket bounce pass between trapping defenders, so he should set up DeAndre Jordan and Blake Griffin for many dunks when they roll to the basket. Pocket-Pass City, anyone?

Here are a handful of additional examples of Redick taking an off-ball screen, catching the ball and immediately dishing to the roll man:

What happens if the defense blitzes Redick on the perimeter to take the ball out of his hands? Here, Chris Bosh closes out on Redick immediately while Mario Chalmers goes over the screen.

Instead of rolling to the rim, where LeBron James can rotate as the help defender, Vucevic pops to the short corner. Redick reads the coverage and finds Vucevic for an open jumper.

What happens if the defense doesn't force the ball out of Redick's hands on the perimeter and allows him to drive into the paint? The Atlanta Hawks rely on Zaza Pachulia to rotate in front of Redick here:

This cuts off Redick's drive, but clears a passing lane from Redick to Vucevic for an easy layup.

What happens if the frontcourt defenders protect the rim, seal the paint and keep a body on their man? The Suns successfully block the paint here, but that leaves Andrew Nicholson open on the perimeter.

What if a perimeter defender slides into Redick's driving lane to cut off his off-ball motion? Mo Williams moves away from Nelson to help on Redick here:

The result? Redick reads the defense and passes out to Nelson for a wide-open three.

And what happens if the defense seals off the paint, cuts off Redick's passing lanes into the paint and forces him to pick up the ball? The Cleveland Cavaliers successfully corral Redick, but the decisions they made as individual defenders create an opportunity for Afflalo on the perimeter:

Daniel Gibson committed to chasing Redick and Tristan Thompson helped over the top to cut off his driving lane to the paint. In response, Glen Davis rolls to the rim, while the off-ball screener (Afflalo) fades back out to the three-point line. The defense is spread thin because of the amount of stress Redick's off-ball movement initiates. By the time the Cavaliers defense can react, it's too late, and Afflalo sinks the open look.

Redick's off-ball movement means Doc Rivers will have a player to use in a role similar to Ray Allen's during his heyday with the Boston Celtics. But it's not just Redick's ability to create his own shot that makes him a great fit for Rivers' team. His natural ability to extend his motion after catching the ball, coupled with his passing ability, turns him into a chaotic off-ball passing threat defenses must address.

While Paul will create for the Clippers off the dribble as a point guard, Redick will create opportunities for the many weapons on the roster by moving off the ball. That makes for a dynamic backcourt in Lob City.