How good can John Henson be?

The Bucks shielded John Henson from heavy duty in his rookie season, but desperately needing to develop their young talent, they can't do so again this year.

Share All sharing options for: How good can John Henson be?

John Henson's rookie season in the NBA wasn't all that different from his freshman season of college. A McDonald's All-American ranked in the top five of his high school class, Henson came into UNC with a tremendous amount of hype. He averaged six points a game as a freshman, struggling with his upper-body strength and the speed of the game. Nevertheless, his unique combination of length, quickness and skill marked him as a comer. 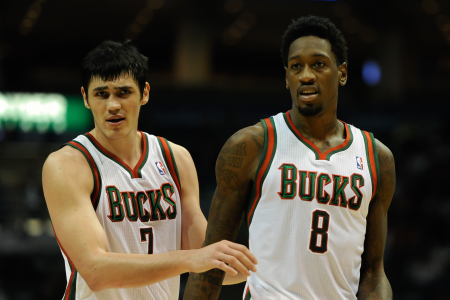 Three years later, after developing into a lottery pick, Henson had to prove himself all over again in Milwaukee. He wasn't given a lot of playing time as a rookie, averaging 13 minutes in 63 games. As a result, his per-game averages weren't that impressive. However, on a per-minute basis, he was among the most productive big men in the NBA. Per 36 minutes, Henson averaged 16 points, 13 rebounds and two blocks on 48 percent shooting.

Headed into his second season, the Bucks are still figuring out what exactly they have in Henson. While he put on some weight in college, he is still one of the most unusually proportioned players in the NBA. At 6'11 and 220 pounds with a 7'4 wingspan, he has the length of a center, the foot speed of a guard and the game of a combo forward. Finding a place in the Milwaukee rotation for his skill set will not be easy, but the potential payoff is so high they have no choice but to try.

Henson, in many ways, is an upper-middle class man's Anthony Davis. His defensive potential is off the charts. In basketball, the key to scoring in a 1-on-1 matchup is being quicker or longer than your defender; there aren't too many players in the NBA who are quicker and longer than John Henson. His arms envelop his opponents, smothering them all over the court. At UNC, he became known for his ability to block jump shots 20 feet from the basket.

The difference between Henson and Davis comes on the offensive end. While neither is a great individual scorer, Davis is a far superior shooter. Last season, Davis took 60 percent of his shots from outside the paint and converted them at a respectable 43 percent. Henson, in contrast, took 35 percent of shots from the perimeter and made only 29 percent of them. His range doesn't extend far outside the paint, a serious problem for a power forward in the modern NBA.

In Milwaukee, Larry Sanders, another non-shooter, is the starting center. He averaged 27 minutes a game last season, and after signing a $44 million extension in the offseason, he's set to take an even bigger role going forward. For Henson to get a lot of playing time, he'll need to be able to play next to Sanders. Spacing the floor with two non-shooting big men is difficult, but it can be done, as the San Antonio Spurs showed with Tim Duncan and Tiago Splitter. Henson doesn't have to be Ersan Ilyasova, but he has to be able to make defenses respect him 15 feet from the basket.

If he can, a frontcourt duo of Sanders and Henson could be a game-changer. The Bucks would have two active big men with 7'4-plus wingspans on the floor, capable of shutting down the paint and controlling the defensive glass. With so much length and speed in their frontcourt, running a pick-and-roll against Milwaukee would be really hard.

For now, though, Henson might make more sense backing up Sanders. While he doesn't have the lower body strength of a traditional center, the post-scoring seven-footer has become a dying breed. For the most part, Henson could use his length to defend stronger players on the block, while his speed and finishing ability as the pivot in small lineups would bring a new element to the Bucks' offense. In a more perimeter-oriented NBA, a 220-pound center isn't inconceivable.

No matter what position he plays, finding playing time for Henson won't be easy. Milwaukee just signed Zaza Pachulia to a $15 million contract to be the backup center, while Ekpe Udoh, a former No. 6 overall pick, is capable of playing at the 4 or the 5. Dealing away Gustavo Ayon and Luc Richard Mbah A Moute eased the logjam in the Bucks' frontcourt a bit, but they still have three reserve big men fighting for no more than two spots in the rotation.

Hanging over everything is the specter of Tobias Harris, who blossomed in Orlando after never receiving consistent playing time in Milwaukee. The Bucks, a rebuilding franchise in a small market, can't afford to make the same mistake with Henson. Even if he doesn't fit with Sanders, they have to establish his trade value for the rest of the NBA.

If nothing else happens this season, they need to find out just how good John Henson can be.