Nikola Vucevic is a rebounding machine

The Magic lost a franchise center in Dwight Howard last summer, but gained another big man with an elite talent in return. Nikola Vucevic is one of the league's best rebounders, and you can thank his long wingspan and upper body strength for that.

Share All sharing options for: Nikola Vucevic is a rebounding machine

The Orlando Magic traded Dwight Howard last summer and welcomed Nikola Vucevic as their new man in the middle. Vucevic was, and still is, a relatively unknown player as he enters the third year of his career. If you searched for information regarding the Magic's new center a year ago, you'd likely find any number of draft profiles on him that read something like this:

Vucevic measured out very well in the Combine's official measurements. His height came in at 6-foot-11¾ with shoes on (meaning he'll be listed as a 7-footer in the NBA) and 260 pounds despite just 6.1 percent body fat. In the physical attributes that won't be listed on his NBA.com bio, Vucevic scored an impressive 7-foot-4½ wingspan and 9-foot-4½ standing reach.

Wingspan is an attribute discussed often around the time the NBA draft combine occurs, but how is it put to use and why is it important? Some players, like Larry Sanders, use their long arms to become elite rim protectors. Others use it to become elite rebounders.

That's the path Vucevic has taken. He was third in total rebounds last season (917), behind Omer Asik and Dwight Howard, second in rebounds per game (11.9) and fourth in total rebound percentage, pulling down 20.2 percent of the available boards while on the floor, according to Basketball Reference. That's what he uses his 7'4.5 wingspan for. Let's see how he uses it.

Here, Vucevic is bodied up by two Bobcats players while Andrew Nicholson puts up a shot attempt from the low post:

Vucevic is in the middle of three defenders now, and Byron Mullens looks to be in position to pull the rebound down behind Vucevic and his teammates: 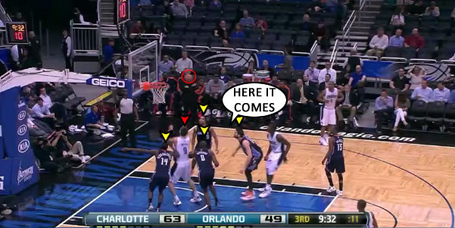 Instead, Vucevic reaches way back to snag the rebound out of the air. Mr. Fantastic would be proud:

Here, Vucevic trails down a rebound against Kevin Garnett, another player with an enormous wingspan.

Vucevic jumps straight up and extends both arms back to pluck the rebound out of the air and away from Garnett. It's impressive that he's able to extend his arms while managing to grab the rebound, but what's more impressive is that he doesn't need to come back down with the ball. Instead, he brings his arms straight down for a putback dunk:

If Vucevic can reach that far back to grab rebounds outside of his zone, he can also go over the top to corral misses he should have no business snaring. Here, he's outside of the restricted area and Elton Brand is fighting for position under the basket:

Vucevic sails in, extending his arm above Brand's reach for the rebound:

Vucevic's wingspan allows him to reach back stop rebounds from going over his head while also giving him the means to get to misses that are in front of him. How does he hold up fighting for a board one-on-one?

Amir Johnson will try his luck rebounding against Vucevic after DeMar DeRozan misses a layup attempt:

Both players go up for the rebound, and while Johnson does a good job of going up and fighting Vucevic, the Magic center uses his wingspan to deflect the ball to himself off the backboard:

The second effort exposes Johnson's 6'9 height and under 7' wingspan. It's clear that Johnson is nowhere near the ball where Vucevic gains possession.

Even if a defender boxes out Vucevic, the battle on the glass is not over. Here, Festus Ezeli puts his back against Vucevic and prepares to go up for the rebound:

This doesn't matter. Vucevic leaps up and uses extends his arm to get to the ball. He isn't able to grab the rebound with one hand, so he taps it toward the rim, away from Ezeli. He essentially plays a game of keep-away so he can come up with the board:

Vucevic is a one-man rebounding army. Few players have the physical tools he has, but he's also using his reach to keep the ball in the air until he can secure it. He can be surrounded by a an entire team, but still come up with the ball. Here, he makes multiple efforts at the rim while four Heat players jump around him, but come up empty handed. He actually tips the ball a total of five times before the putback goes in:

Vucevic also shows his great upper body strength by keeping his arms up while rebounding and pulling the ball away from defenders. Here, he drives into the paint and tries to finish a layup around Ryan Hollins. The attempt misses and Ronny Turiaf goes up for the rebound, but Vucevic hops up to tip the ball back into the air twice before finally securing it. His arms stay up the whole time:

Once the ball is secure, he keeps his arms high and is able to toss the ball back up for a putback. While falling away, mind you. This man is strong:

Check out a few minutes of Vucevic swallowing up rebounds from all over the court. It's clear he puts his physical gifts to use, and it's no fluke he was one of the top rebounders last season:

Vucevic is a monster under the rim. Standing 7' tall or having an over 9' wingspan doesn't guarantee a player will become a rebounding machine (see: Bargnani, Andrea), but Vucevic is already one of the best boarding bigs just two seasons into his career. He isn't getting any shorter, his arms aren't shrinking and his rebounding numbers shouldn't dwindle. He's a rebounding force and he's just 22.