Pablo Prigioni: The pest that helps the Knicks

The New York Knicks were a better team last season when Pablo Prigioni was on the court. We examine all the reasons why that's the case.

Share All sharing options for: Pablo Prigioni: The pest that helps the Knicks

The New York Knicks have an odd mix of talent on their roster. Their best player is Carmelo Anthony, a powerful isolation scorer that needs the ball in certain spots to play his game. Their second-highest paid player, Amar'e Stoudemire, is trying to extend his career by becoming a low-post player. Their other top offensive player, J.R. Smith, became a Sixth Man of the Year winner once the Knicks let him clear out and attack off the dribble.

Meanwhile, the rest of their team, from the overlooked point guard to the menacing defensive center to the marquee offseason acquisition, would thrive in a spread offense that ran high pick and roll all the time.

How do you fit all those elements together to form a coherent contender? You need lots of glue. You need players that can facilitate team play with different kinds of teammates. It'd also help if said players came cheaply, since the incoherent parts are expensive on their own.

The 36-year old isn't much of a scorer, shoots reluctantly, isn't athletic enough to be a lead point guard and has too many international miles on him to play 35 minutes a night. But when he is in the game, the Knicks are a better team. They shoot significantly better from the floor and from three-point range. They get more assists. They defend better. And while they're still a decent team when he sits, they have a higher net plus/minus rating in the minutes he plays than in the ones Anthony, Tyson Chandler, Raymond Felton or Smith do.

What is Prigioni doing to help his team succeed? Lots of things.

With Prigioni on the court, the Knicks' offense has more fluidity. When Anthony and Smith are your top two offensive threats, it can be tough to consistently involve all five players in a set. The offense can be powerful, but it's also predictable. You know that Anthony and Smith are going to isolate and look to score.

That's why a cerebral player like Prigioni that makes quick decisions and keeps the ball moving is so important. Notice how much is happening on this play in the Knicks' first-round playoff series against the Celtics.

The Knicks weren't able to generate that kind of motion in their offense very much during the playoffs. When they did, it was usually because Prigioni was in the game.

More specifically, Prigioni can initiate a set and free Felton to function off the ball. The Knicks occasionally run Felton through the elevator doors screen (see here for explanation), which only works because of Prigioni's ability to direct an offense.

That's a luxury the Knicks have when they tap into Prigioni's point-guard instincts from several years starring overseas and internationally for Argentina.

Guards don't get enough credit or blame for their ability to set screens, particularly near the basket. This is especially important for the Knicks because so much of their offense relies on Anthony in the mid-post area. If a guard can hold up Anthony's man for just a second on a cross-screen, it makes the entry pass much easier.

Prigioni is the best Knick at setting that cross-screen. Here's an example from an April game against the Bucks.

Prigioni makes strong contact with Marquis Daniels, allowing Anthony him to catch the ball closer to the basket and making it easy for Felton to throw a quick entry pass. That makes it harder for the Bucks to double team, and Anthony eventually draws a foul going for his patented turnaround jumper.

As the chart above shows, Prigioni makes his biggest impact for the Knicks on defense. Why? Because he's a pest.

But Prigioni's defensive impact is felt even when he's not swiping the ball away. His ball pressure disrupts offenses, forcing them to initiate their sets much later in the shot clock and even sometimes preventing their point guard from getting the ball at all.

This is a good example from an April game against the Cavaliers. As soon as the Knicks score, Prigioni is in Kyrie Irving's face to defend him in the backcourt. By the time Irving shakes Prigioni, gets into the frontcourt and calls out a set, the Cavaliers have wasted 10 seconds of the shot clock. With just 14 seconds left, their only play is a basic pick and pop involving Irving and Tyler Zeller that ends in a long two-point miss.

Because of Prigioni's ball pressure, the Cavaliers don't have enough time to run a play where all five players are moving. Instead, the three players on the baseline stand still. This is not a high-percentage play, and the only reason the Cavaliers are forced into it is because Prigioni's defense disrupted their timing.

Visit Posting and Toasting for even more Knicks coverage.

The Knicks have a unique defensive strategy that requires a lot of double teaming and tons of off-ball switching when dealing with screens. Many of those double teams come from the man closest to the ball, a practice that's generally frowned upon because it often allows for easy ball rotation and open shots from the perimeter. The Knicks try to compensate with unconventional closeouts -- described within this piece by Grantland's Zach Lowe -- and well-timed double teams that scramble the offense before it can figure out how to swing the ball properly. This has mixed results.

But as long as the Knicks are going to use this strategy, they need their guards to be aggressive double-teamers and aware help defenders. Of the Knicks' guards, Prigioni is the best at doing both of those things. Several of the steals you saw in the earlier video came when he was helping off his man to double-team the ball. He gets burned occasionally, but less often than the other Knick guards.

The reason: Prigioni is smart enough to come over with active hands. Notice how he's trying to block Paul Pierce's vision on this play, which eventually led to a contested 19-footer by Avery Bradley. 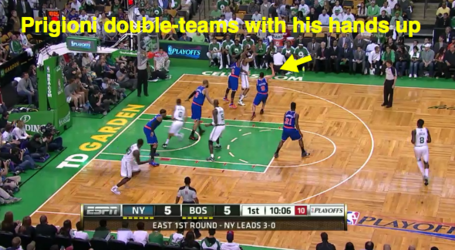 Compare that to Raymond Felton's attempt to plug the middle on a Paul George drive in the Knicks' playoff series loss to Indiana. Felton's hands are down as he rotates, making it easy for George to deliver a pass to an open D.J. Augustin on the wing. 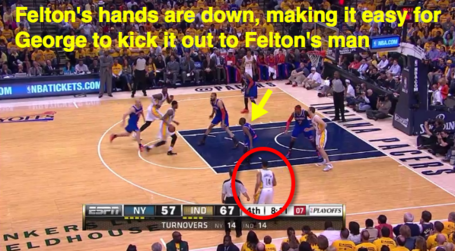 Those hands make a big difference. Prigioni's consistent ability to double team with hands in the passing lanes makes it more difficult for the man with the ball to find his open teammate. That shows in the Knicks' improved defensive numbers when Prigioni is on the court.

Whether the 36-year-old Prigioni can reasonably be expected to play significant minutes this season and hold up health-wise remains to be seen. If he can, though, the Knicks would be wise to give him more court time, even if it means fewer minutes for Smith or Iman Shumpert.