The Indiana Pacers have taken a small media market and built a conference title contender. Furthermore, they've ponied up the money to keep it intact. It's not, however, been a blueprint model for small market teams to replicate.

Share All sharing options for: Indiana Pacers are paying the cost to not quite be the boss

A team that habitually loses money year on year has nevertheless ponied up a maximum salary for a player who has yet to fully earn it. That must fully earn our respect.

A maximum contract for Paul George was the cost of doing business, yet the Indiana Pacers could simply have not done that business. They could have dealt him away with his value at his highest or waited a year and let the market dictate his value. At best, they'd be able to retain him for less, and at worst, they'd just give him the max they were going to give him anyway.

Yet they didn't. Despite their small media market stature, the Pacers stepped up with a maximum salary contract for the second year in a row. 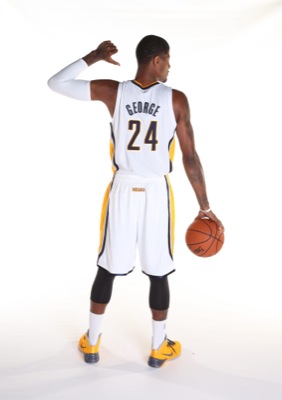 Tom Ziller on how the new max player can continue to grow.

Known truths are these: you can win a title with a small-market team, but it's much harder. Considering how hard it is to do anyway, regardless of your resources, this makes the task of building a title team in a small market nigh on impossible. Yet the Spurs have done so repeatedly, and the Thunder and Grizzlies are close. A well-run, selectively-spendthrift small market team with a strong drafting record has that faint whiff of a chance, and Indiana is one such candidate now.

This isn't to say that Indiana have been putting together quality moves for a generation. They haven't. Ever since Ron Artest imploded their last true champion contender, the ensuing clean-up operation clogged up the salary cap for years, not helped by the overpayments (and unnecessary payments) of Jeff Foster and Dahntay Jones and the unpleasant and expensive ending to the once-promising Jamaal Tinsley era. Indiana tread water in the 30-win range of mediocrity without it ever being a deliberate stepping stone to the top, and they made moves that kept them in it. As we explored last week, that's the last thing you want.

However, winning in the 30s and drafting a legitimate core is better than winning in the teens and drafting one, if you can do it. And Indiana did. It took both fortune and skill to do it; nevertheless, it was quality mid-first and second round picks that got it done. First it was Danny Granger (No. 17, 2005), then Roy Hibbert (No. 17, 2008, whom they only landed because of Toronto's poorly thought out desire for Jermaine O'Neal), complimented by Lance Stephenson (No. 40, 2010). In tandem with this, the it's-all-we-could-get deals of Mike Dunleavy and Troy Murphy finally disappeared (Murphy nabbing Darren Collison in the process), as did the oversized deals of Tinsley, Foster and T.J. Ford. With this newfound cap flexibility, Indiana found a perfectly complimentary piece (David West) for a perfectly complimentary price (two years and $20 million).

Indiana didn't build the team in a model way. Indeed, even when their cap situation did open up, they still burnt $7.5 million of it on Gerald Green and D.J. Augustin, both of whom then poured in wasted seasons. What they did do, however, was commit to retaining the good they had built, however they had built it. The importance of that cannot be overstressed. It would have been very easy to choose between George and West this summer, and yet it didn't happen.

But whilst we can commend Indiana's courage in the George extension and their recent asset management, we must be wary before we anoint their strategy as the blueprint for small market teams to follow. This is particularly important in light of the fact that, when accounting for Roy Hibbert, they now yield two max contracts, one to an all-NBA third team wing and one to a center who had the 23rd-worst true shooting percentage in the league last year. Additionally, West's new deal is not the good value his previous one was; being paid $12.5 million per annum for each of the next three seasons, West's final year in particular will be burdensome as he turns 36 years old, highly unlikely to still be the player he is now.

It's all been the cost of doing business. The unfortunate but inevitable by-product of securing good quality players at low-to-acceptable prices is that the low price makes them more attractive, and thus the price goes up. The Pacers have their first exciting, genuinely competitive team for a decade, and have spent the money to continue it, but because they have so little of it to spend, they are almost all-in already.

They have, then, a fragile build of a roster, a very good quality team in the short term with hopes of incremental improvement, but who need the cards to fall in their favor if this isn't to be the apex. They need West to sustain his ability into his mid-30s, for Granger to come back healthy and to fit seamlessly, for Hibbert to develop offensively and for George to make at least one more leap. Probably two. Ultimately, this is probably the best they could ask for, and they've done well to give themselves this whiff of a chance, however faint.

It is one of the closer emulations of the 2004 championship-winning Detroit Pistons we've seen. But Kevin Durant, Tom Thibodeau and the new battle-hardened LeBron James weren't around then. Indiana did what they had to do and did what they could, but, unless George joins the game's very elite, it won't be enough anyway.