Rest during the regular season would do Dwyane Wade and the Miami Heat some good, but with Mike Miller off to Memphis, there's an issue of who will take over the perimeter duties if Wade is limited.

It's easy to forget the Miami Heat were a timely Ray Allen shot away from falling to the San Antonio Spurs in the NBA Finals. The 2013-14 roster doesn't have a lot of turnover and could end up better and more versatile than the last two championship teams if health concerns end positively.

It's never easy to win titles, let alone three in a row. The Indiana Pacers, Chicago Bulls and Brooklyn Nets are three teams that could legitimately consider themselves contenders in the Eastern Conference alone.

LeBron James is only expected to get better and the Heat are in the conversation, if not the favorites, to win a title. Yet there is another lingering issue in South Beach, and it all starts with Dwyane Wade's health. 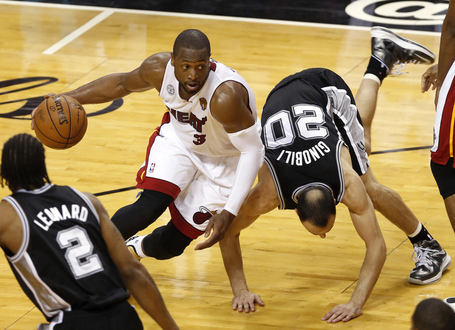 Dwyane Wade's knees seemed close to betraying him last season. He's opened up about the problematic left knee that required meniscus to be removed while he was playing college ball at Marquette, which has led to bone bruises and tendinitis. Wade has been hobbled in the last year especially, and his health is a concern heading into 2013-14 even if he's apparently in great shape after working with trainer Tim Grover this offseason. So, Wade could miss time because of injuries or for rest.

Depth may be an issue on the perimeter. Miami used the amnesty clause on Mike Miller because of financial constraints this summer, and though he really wasn't a big part of the rotation, Shane Battier can't take all 15 of his rotation minutes. Depth-wise, the point guards -- Mario Chalmers and Norris Cole -- will only play point. Wade is backed up by only Ray Allen. So, who takes all those minutes at shooting guard and small forward?

Perimeter defense is also an issue for the Heat. Aside from James, the defensive capabilities of players from the point guard to small forward spot range from OK to not-so-great. A lot of it is simply because of aging legs. In the playoffs, the Heat allowed opponents to shoot 37.2 percent on three-pointers that weren't corner treys. It was second-worse among playoff teams -- the Lakers were last -- and a drop-off from allowing 35.8 percent during the regular season, according to the NBA.com Stats tool. 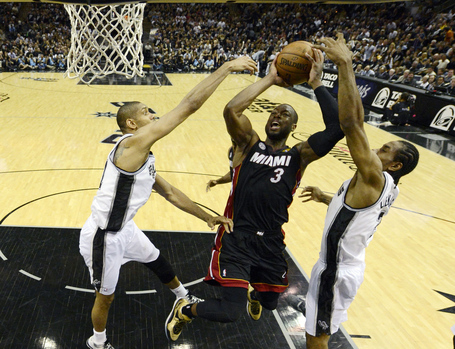 How to handle Wade

Sun Sentinel beat writer Ira Winderman expects the Heat to discuss limiting Wade's minutes in some way. While coach Erik Spoelstra might have a difficult time convincing Wade to sit out back-to-backs or accept fewer minutes, it could go a long way in preserving him for the playoffs.

Last year, Wade only missed three games for the majority of the year because of various dings, but he sat out nine of the final 14 games of the regular season. That was nearly too little, too late. Though Wade played in every postseason game but a closeout Game 4 in the first round against Milwaukee, health clearly played a factor in his game.

Defenses, of course, tighten in the postseason, and Wade's offensive rating of 102 points per 100 possessions fell off from his regular-season rating of 112 points per 100 possessions, according to Basketball-Reference. His efficient-as-ever field goal percentage also fell from 52 to 46 percent. While James, for example, had similar drop-offs statistically, it wasn't due to erratic play game by game.

To the Heat and Wade's credit, the shooting guard's role has changed for the better in the last few seasons. He's become less of a slasher and more of an efficient mid-range shooter. He's moving off the ball more and dominating the dribble less, but that's helped him find more open shots. Of his 6.1 shots at the rim per game for the year, 56 percent were assisted upon, according to HoopData.com. The highest percentage of shots at the rim Wade was assisted on prior to 2012-13 was the 49 percent the previous year, and the number has been rising since teaming with James. Wade had never shot more than 67 percent at the rim before he shot a career-high 74.7 percent last season.

The numbers show Wade is adjusting to James and old legs well when he's not battling knee injuries.

Who takes the open minutes?

Battier will be a returning asset as a floor-spacer and three-point shooter, as will Allen. But the depth behind the aging role players appears mighty thin unless somebody steps into the rotation.

James Jones shot just 35 percent from the floor in scrub minutes last season. Could he or Rashard Lewis become, at the least, spot three-point shooters? Can Roger Mason Jr. and his 38 percent three-point accuracy for a career make the final 15-man roster? What about Michael Beasley, the enigmatic forward who is coming off a terrible season on and off the court (Beasley was one of two players to shoot at least 500 shots and score less than a point per field goal attempt last year)?

Defensively, the options don't look good at all, but the offense is becoming a bigger concern.

Considering this all, how tough will a three-peat be?

The gap is closing. San Antonio let a chance to bring down the Heat slip away last season. Meanwhile in the Eastern Conference, the Pacers and Nets both made themselves better over the summer with all targets on Miami's back.

The Heat could get lucky with the addition of Greg Oden and a full year with big man Chris Anderson, as the duo gives Miami true centers in the rotation it hasn't had thus far. But James, no matter how good he is on both ends, can't be pulling the weight of point guard, shooting guard and small forward.

Most of all, he needs a healthy Wade for the playoffs to challenge for a third championship.

• Pacers paying the cost to not quite be the boss