Due to circumstances beyond his control, Kevin Love has never even sniffed the postseason. For his legacy's sake, that must change in 2013-14. Otherwise, it might have to happen in another uniform.

Kevin Love is a fantastic player, one of the NBA's best power forwards. He's an absurdly good rebounder and a talented scorer. And since entering the league in 2008, his teams have gone 113-281.

That says far more about the team around Kevin Love than it says about the player, but it's also an inescapable reality. Love has only played for hideous teams in the NBA -- specifically, a perpetually hideous post-Garnett Timberwolves team. In each of the last two seasons, it looked like Minnesota would break through. But in each case, injuries and not having the needed talent to survive injuries broke the Wolves. Love was twice the injured victim in question, and there's no question that an injury to Love is quite catastrophic to the Wolves' chances on the court. 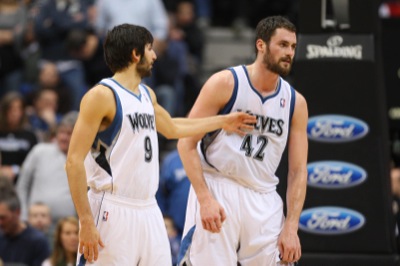 The problem for Love is that his peers are largely all hanging out in the playoffs in April and May, while he is left hoping for a better future. Of the 14 lottery picks from the 2008 NBA Draft, only four -- Love, Eric Gordon, Joe Alexander and Jason Thompson -- have zero career playoff appearances. Derrick Rose and Russell Westbrook, who with Love make up 2008's Holy Trinity, already have some incredible playoff moments in the books.

This season, the path of Love's career needs to change. He can become a free agent in 2015, and he's probably a max player no matter what happens. But that doesn't matter. In NBA lore, careers are built in the postseason. And there's reason to believe Love cares as much about lore as money. (It's worth noting that he came from money.) Love has been openly agitated with the Wolves' inability to win over the years, though there's little question that Kahn's dismissal has healed wounds. But if the Wolves struggle to get within spitting distance of .500 again this season, those wounds could easily be re-opened.

Minnesota's offseason was a mixed bag. Andrei Kirilenko was certainly one of the Wolves' top three players last season and the team's best defender. Minnesota made great strides on that end, ranking No. 13 overall on defense. But that success came largely due to turnover creation and foul rate -- the Wolves' shooting defense ranked only No. 24. Will Kirilenko be missed much on defense? Well, Minnesota could rank lower than No. 24 in shooting defense without him. And the defensive-minded additions to the roster -- Corey Brewer, Gorgui Dieng -- are unlikely to make as major an impact as AK, mostly due to minutes. So Ricky Rubio and Nikola Pekovic will have a lot on their plates on defense.

On the positive side, Love has more scoring help now. The front office brought in Kevin Martin, who is immediately Minnesota's best non-Love perimeter scorer since Latrell Sprewell. Shabazz Muhammad was the lottery pick for Flip Saunders and company; he will almost certainly take shots. In addition, Derrick Williams and Pekovic are frequent scorers, and Rubio can make anyone a scorer in the right set. Love has plenty of help on offense.

That's why it's imperative that Love has a winning season. He can only control what he does, but these situations have a way of imparting responsibility on a team's best player. Love is close to midway through his career. His lore is at stake here, and if Minnesota doesn't turn it around, he's going to find it difficult to not jet out of town in 2015. And frankly, if Minnesota doesn't improve this season, the Wolves may find it difficult to not flip Love while they can.