It's easy to bag on some of Josh Smith's negatives, but ultimately, there are very few, if any, players in the league that can do as many things as he can. We examine just one of those things: his one-on-one defense. 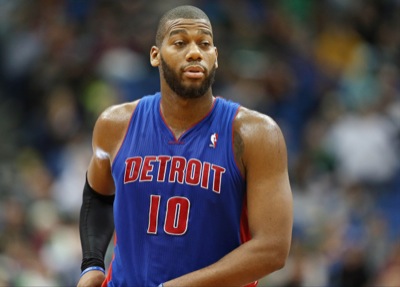 DETROIT BAD BOYS: Who starts at SG?
FLANNERY: Crazier things have worked
O'DONNELL: Drummond fooled the experts
PENNINGTON: Loading up for the playoffs

In "Seven Seconds or Less," the landmark Jack McCallum book on the Steve Nash-era Phoenix Suns, there's a lot written about Shawn Marion, the brilliant, yet sometimes mercurial Suns' cornerstone at the time. McCallum noted Marion's sensitivity and his occasional lack of focus, following the theme throughout the book. But he also quotes the team's coaching staff realizing that the total Marion package is worth its weight in gold.

When you have that kind of natural ability, assumptions of greatness follow, and, as infuriated as the coaches get with Marion from time to time, they concede that it comes partly from their elevated expectations of him.

"We don't want him to just guard his guy," says Dan [D'Antoni], "we want him to keep his guy from scoring. We don't always ask that of other players."

"We've been through a lot of saying 'Shawn this' and 'Shawn that,'" says D'Antoni. "But you know what? We've come a helluva long way. There's a helluva lot of ways you could screw it up by looking elsewhere for another player."

Josh Smith is capable of doing pretty much anything he wants on the court. When you see that package, you think that Smith should be the best player in basketball. And when you see Smith's visible flaws -- his too-frequent errant jumpers, his occasional lack of focus, his verbal jabs at former coaches and management in his nine years in Atlanta -- you feel disappointed. It's natural.

But that mindset overlooks just how hard it is to do all the things Smith can do. The Suns' staff realized that they shouldn't be taking Marion's many positives -- his speed, his shooting ability, his defensive versatility, his toughness, his willingness to play inside when he wanted to play outside -- for granted. It's time for us, the collective public, to stop doing the same with Smith.

Specifically, it's time for us to recognize Smith's defense. It's not perfect -- he tends to surrender position too easily and can sometimes fall asleep when defending Stretch 4s -- but you aren't going to find many players that can do as many things as Smith can on that end. Watch this five-minute highlight video, which shows him locking up guards like Kobe Bryant and big men like David West. (It's also mercilessly cruel to Paul George.)

How is Smith able to slow down so many different kinds of players? It has to do with his length and how he uses it. Nine years in the NBA have taught Smith that he's capable of blocking and challenging shots from all sorts of players. The trick is not putting himself in a position where he gives up that advantage. That means never going for pump fakes and always making sure he leaves his feet after the man he's guarding.

This sequence against LaMarcus Aldridge is a great example. Rather than falling for Aldridge's pump fake on his deadly turnaround jumper, Smith keeps his feet on the ground, understanding he can't block the shot anyway.

It's also how Smith keeps his feet on the ground that matters. He doesn't just stand still. Instead, he slides into Aldridge's legs, forcing him backwards and into an off-balanced shot. 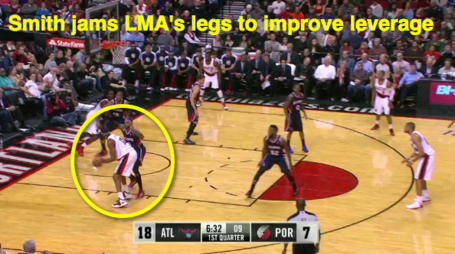 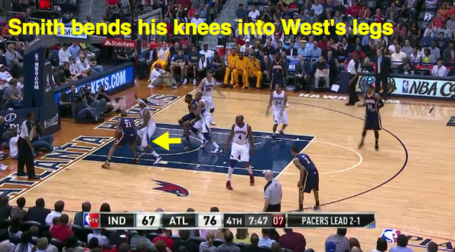 And when Smith does leave his feet, he makes sure to do it only right after his opponent does so. Notice how his feet are on the ground when Paul Millsap lifts his back foot for a fadeaway. 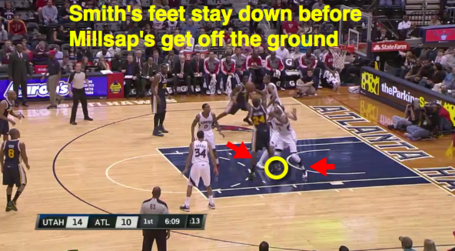 This ends with an embarrassing swat for Millsap.

The same instincts also make Smith a great perimeter defender. Smith knows that while he might give up some lateral quickness against elite perimeter scorers, he has a length advantage. Like Marion in his prime, Smith sags off perimeter players and plays angles, directing drivers away from the hoop and into the clutches of his superior wingspan.

This Paul George drive in transition is a great example. Rather than moving side-to-side with George, Smith slides to a spot in the middle of the lane to prevent George from getting by him to the basket. 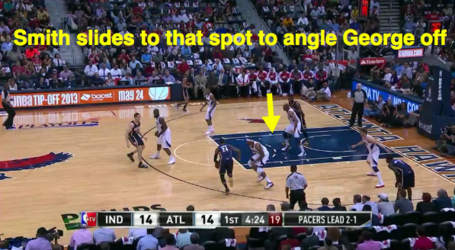 George has to step back for a fadeaway jumper that is well-contested and misses badly. 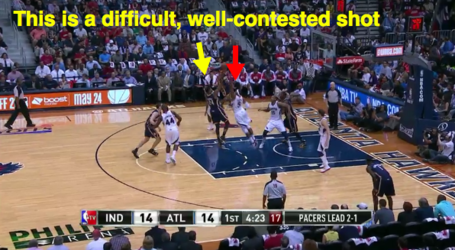 You see the same thing in this clip with Tobias Harris. Rather than slide laterally to meet Harris where he starts to drive, Smith angles him off into the middle of the lane ... 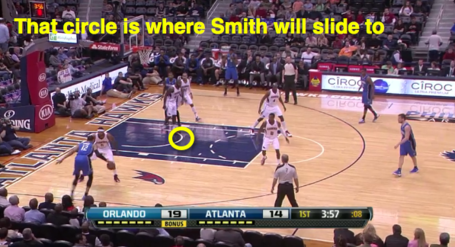 ... and then contests the shot, to the point where it's nearly impossible for Harris to score. 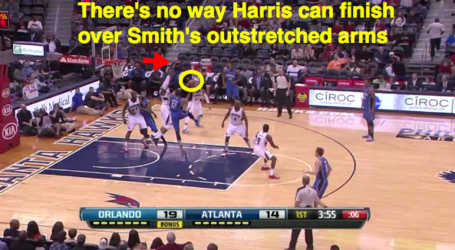 Had Smith tried to slide directly with Harris or George on these plays, they'd have blown past him. He's just not quick enough to defend perimeter players that way. But by choosing instead to beat them to the spot closer to the basket, Smith is able to use his length to his advantage and stop them from getting where they want to go. This is the manifestation of Smith's on-court intelligence.

And he still doesn't leave his feet, even when he's trying to close out a defender. Most defenders would have gone flying when Marcus Morris delivered this pump fake at the basket, because they would have been off-balanced from running to him on the perimeter. Smith doesn't jump, though, even though he starts at a disadvantage. Naturally, he gets the block anyway.

Stuff like this shows the weird disconnect between Smith's reputation and his reality. Many see him as an unintelligent player, mostly because of the frequent number of jumpers he takes when he's not good at making them. And yet, he plays man-to-man defense using his brain more than his body, using angles to beat his man to the spot and staying down instead of going for pump fakes. His help defense, which is not displayed much here, is also routinely excellent.

What gives? This may sound crazy, but it's possible for a player to be especially smart in one area and still be prone to poor concentration in another. Who knew? That perfectly describes Smith. We can notice his faults easily, but we forget about his strengths because they can be more difficult to spot.

And we sometimes don't realize that the strengths, ultimately, outweigh the weaknesses. Consider just the skills displayed in this piece. Think of the lineup flexibility a coach has when Smith is capable of guarding so many different kinds of players. He can go big, playing Smith at small forward and finding ways to punish the opponent inside. Or, he can go small, playing Smith at power forward to open up the floor. This will suit the Pistons especially well with Greg Monroe and Andre Drummond as the team's foundations. Maurice Cheeks should be able to find plenty of minutes for all three.

Smith is not the perfect player, but like Marion, the collection of skills he brings to the table are unique and huge assets for his team. Hopefully his new team adopts the Suns' approach and remembers not to take those skills for granted.