2013 Oklahoma City Thunder roster: It's about Kevin Durant and Russell Westbrook, as usual

Things will be OK as long as Durant is around, but a setback for Westbrook will make things a bit more challenging in the early going.

Share All sharing options for: 2013 Oklahoma City Thunder roster: It's about Kevin Durant and Russell Westbrook, as usual

Last year's season-ending injury to Russell Westbrook ultimately defined the Oklahoma City Thunder's 2012-13 season, but things were once again looking bright for the reigning Northwest Division champs. That's how things go when you still boast two of the very best players in the game. However, Westbrook's latest setback, which may keep him out until mid-December, casts a cloud over the team's hopes.

Whether the Thunder will be able to get back to the Finals again in 2014 after a disappointing spring will be the big story, but the pieces are in place to make it happen. 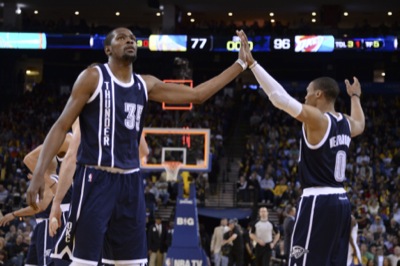 Kendrick Perkins -- Most people are done with coach Scott Brooks' stubborn insistence on using Perkins, but that doesn't mean he'll be gone any time soon. Still under contract through 2014-15, Perkins will continue to be a drain on the team's salary cap regardless of whether he's contributing on the court. For now, that whole on-court production thing is the bigger question, as Perkins' game has deteriorated badly over the past few years.

Serge Ibaka -- The league's leading shot blocker over the past three seasons, Ibaka's emergence as a legitimate offensive option could be the difference for OKC. Scoring a career-high 13.2 points per game last season, Ibaka hit 57 percent of his shot attempts and displayed some expanded range around the elbows. He's not quite as brilliant defensively as his reputation would suggest, but he's plenty good, and the offensive development makes him an effective two-way player. However, he struggled badly in the playoffs once Westbrook went down.

Kevin Durant -- The second-best player in the league behind LeBron James, Durant's development over the past few seasons has been incredible. No longer the wiry athlete who struggled to impress in pre-draft workouts, Durant's a beast physically and the most well-rounded offensive player in the league. With the consistent improvement to all parts of his game, Durant inches closer to being the world's greatest, but he'll need to take another leap to get past James.

Thabo Sefolosha -- Since joining the Thunder four years ago, Sefolosha has been as consistent a part of the team's starting lineup as any player. That may seem bizarre considering his weak scoring numbers, but Sefolosha's development into an elite three-point shooter over the past couple seasons explains his persistence. Always a brilliant perimeter defender, Sefolosha's improvement as a shooter is startling. He shot 28 percent from beyond the arc three years ago, improved to 44 percent in 2011-12 and then maintained the efficiency while doubling his output last season. He's definitely a guy who has rewarded OKC for its patience.

Russell Westbrook -- In a league full of brilliant athletes, Westbrook still manages to stand out as a supremely gifted human. His speed, agility, strength and balance are almost unmatched throughout the league, putting him in that rare company with guys like LeBron, Blake Griffin and a healthy Derrick Rose. While recovery from a torn meniscus clouds the guard's future a little bit, he's still just 24 years old and should be able to return at close to his previous level of athleticism. Westbrook's return will be pushed back further than expected due to a second knee surgery, and the Thunder hope he can be back by the end of November or early December.

Reggie Jackson -- Jackson will play a major role the first month or so of the season as Westbrook recovers from the second knee surgery. Jackson did a decent job filling in for Westbrook in the postseason, all things considered, and the Thunder hope the third-year guard will continue to improve so the drop-off isn't that steep.

Nick Collison -- Collison has always been a steady frontcourt option off the bench, and he's coming off a season that saw him average 5.1 points and 4.1 rebounds while shooting 59.5 percent from the field. Many believe that he should be starting over Perkins because of his screening and defensive abilities.

Jeremy Lamb -- The Thunder are counting on Lamb to replace some of the scoring punch off the bench that left when Kevin Martin signed with the Minnesota Timberwolves. The second-year man played well at Summer League, averaging 18.8 points.

Hasheem Thabeet -- Thabeet has been a huge bust in the NBA, but he had his most productive season since his rookie year in 2012-13 while appearing on the fringes of Oklahoma City's rotation.

Derek Fisher -- Fisher played poorly throughout the regular season, but he shot 47.1 percent from three in the playoffs. The 39-year-old continues to be held in high regard by Brooks despite his game declining severely in recent years.

Visit Welcome to Loud City for even more Thunder coverage.

Perry Jones III -- Jones played sparingly as a rookie and didn't participate in Summer League due to an oral procedure, but could be counted on to join the rotation.

Ryan Gomes -- Gomes hasn't played in the NBA since 2011-12 and has a partially guaranteed deal.

Steven Adams -- Adams, the No. 12 pick in the draft, has a lot of upside as an athletic big man. He averaged 9.0 points and 6.5 rebounds at Summer League.

Andre Roberson -- Roberson, the Thunder's other first-round pick, showed potential as a solid rebounder at the wing position at Summer League.

Scott Brooks -- Brooks is entering the second year of the four-year deal he signed with the Thunder prior to last season. Brooks boasts an impressive record in Oklahoma City, but there are questions about whether he's the right coach to lead the Thunder to the promised land. While the Thunder have been extremely successful under Brooks, much of that credit can certainly be placed on the immense talent of Durant, Westbrook and Ibaka. Brooks has been soundly criticized at times for unimaginative late-game sets and his previously-mentioned insistence on playing Perkins too much. Brooks isn't a bad coach by any means, but he has plenty of room for improvement.

• The Hook: Quit shooting so many threes!

• Ziller: Kobe, injury recovery and the myth-building of a legend

• Did Jordan give Looney Tunes PEDs in Space Jam?